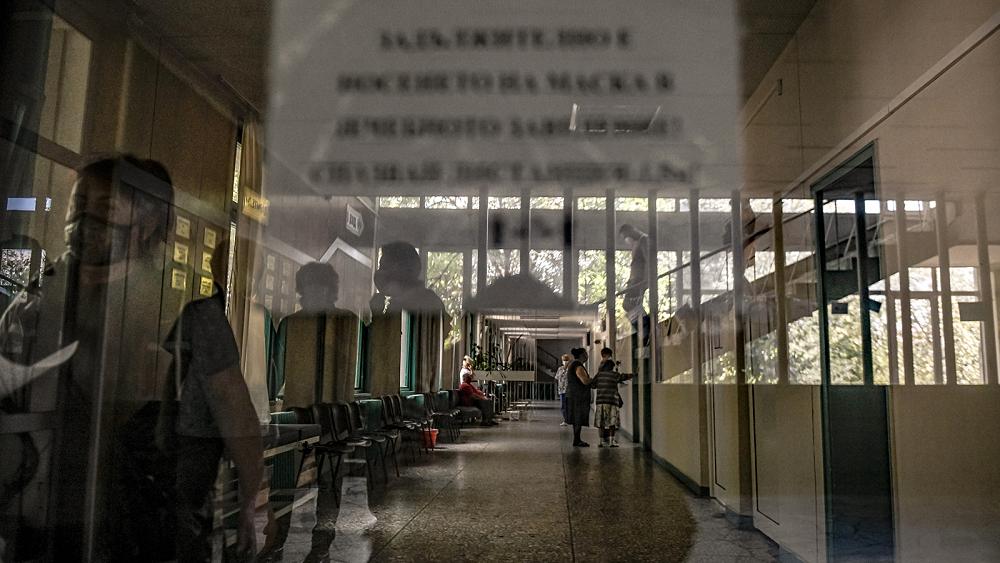 Bulgarian politicians have been embroiled in year-long politicking as the country nears its third consecutive election. Yet with two weeks to go, focus has shifted on skyrocketing COVID death and infection rates.

Bulgaria currently leads the global rankings for COVID-related deaths per capita two weeks before holding snap elections for the third time this year, poised to be held on November 14.

“Each day Bulgaria loses the equivalent of one plane crash. It is really horrendous,” said Ruzha Smilova, program director at the Centre for Liberal Strategies based in Sofia.

Yet the grim headlines have not made the population amenable to restrictions, with protests erupting in several cities against the Green Passes, or certificates that have become obligatory to enter malls or restaurants.

The country has been in the throes of a difficult political crisis, marked by a months-long protest movement that began last year calling for the resignation of the populist government led by Boyko Borissov and his “Gerb” or Coat of Arms party, that has been in power since 2009.

Since then parliamentary elections have been organised two times, in April and July, yet the winning parties were unable to form a ruling coalition. Currently, the country is led by a caretaker government that has been reluctant to pass stricter measures for fear of public backlash.

Bulgaria has also been suffering significant demographic decline due to migration as well as low birth rates. The current death spiral due to COVID will likely compound the issue.

“The tragedy will only grow. It is shocking to see this in a society which obsesses over the demographic crisis in the country – Bulgaria is the fastest-shrinking country in the world and has lost 10% of its population in the last 15 years since accession,” explains Smilova.

“So even though there is a demographic panic, society is insensitive to massive loss of life currently. It isn’t ready for stricter measures. Unless this changes I don’t see how the president will introduce stricter measures,” she stated.

Its citizens are also the least vaccinated in Europe. Only 1.38 million people have received two jabs, which comes down to 20 per cent of the population of almost seven million. 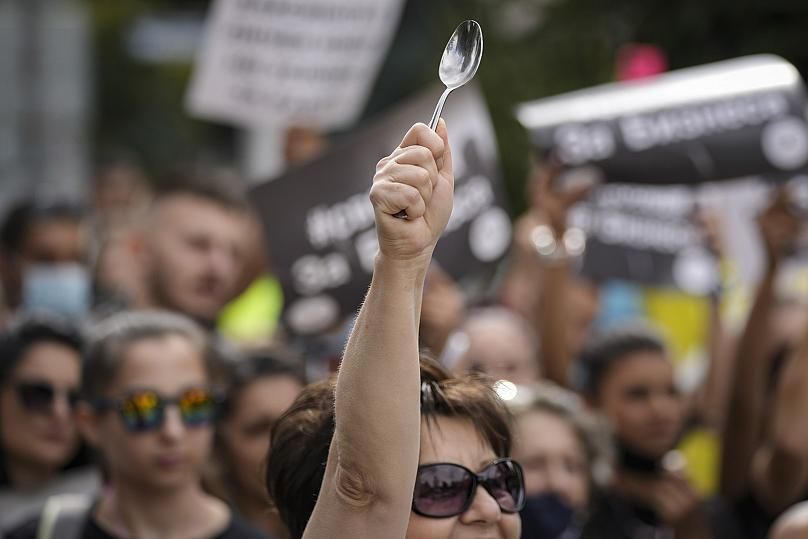 Even so, the introduction of the Green Pass was done relatively quietly “in a country used to its politicians playing down everything that might upset their voters,” says Angel Petrov, a reporter at Dnevnik, one of Bulgaria’s most notable online outlets.

“When the current caretaker government realised this summer that there would be a new election coming in November, they decided to tread very carefully with public measures that could lead to discontent,” he said.

Bulgaria has had significant trouble deciding who should succeed former PM Borissov, who resigned in May. Prior to the upcoming election, Bulgaria held two votes in the span of three months. The results in July echoed those from April, with the same six parties and coalitions crossing the mandatory electoral threshold.

But although the results meant that any of the six were possible contenders for a government coalition, almost none saw eye to eye, and the acting president Rumen Radev had to call another, third round. This time, the Bulgarian voters will elect both the president and the parliament.

Since May, the caretaker government appointed by Radev and led by Stefan Yanev, a former military officer and one-time minister of defence has been very careful not to ruffle anyone’s feathers in what Petrov describes as a “culture of appeasement.”

“What I do know is that the attitude of Bulgarian authorities hasn’t helped people come to terms with what has been happening during this pandemic. This is obvious from the fact that all the different policies in the past year and a half have been directed at appeasing people,” he said.

“This is a culture that was fuelled by the ten years of Borissov’s government, and president Radev and his caretaker government have been absolutely spoiled by this.”

“It’s the policy of always trying to make sure no one gets offended or incensed by what is happening, a government that constantly wants to show it is accommodating to everyone’s demands,” Petrov illustrated.

The appeasement approach was the easiest way to rule over what is historically a nation that is very mistrustful of governing institutions, he believes.

“I do think there is a cultural element to it. I think the problem is a deep and pathological mistrust of not just the government or institutions, but the distrust in any collective organisation outside one’s own balloon,” Petrov concluded. 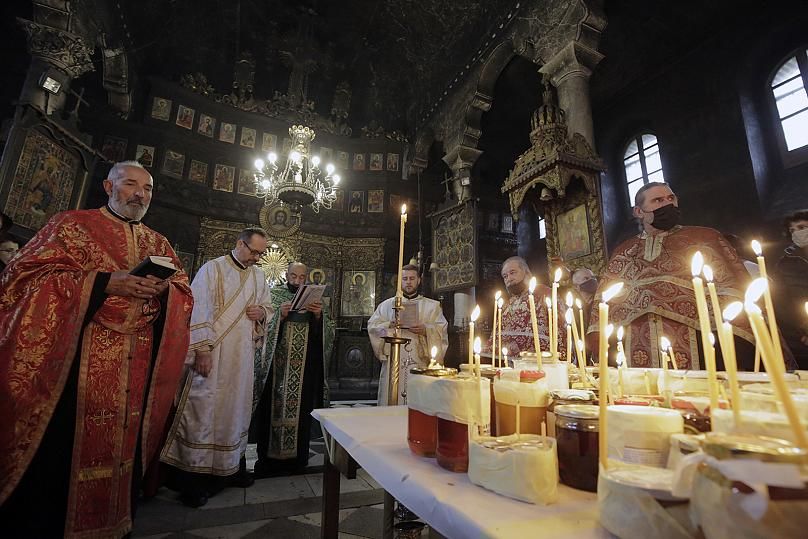 Priests pray during mass for the 'sanctification of honey' at the Presentation of the Blessed Virgin church in the town of Blagoevgrad, some100 km
(62 miles) south of the Bulg

Bulgaria was one of the key empires in Southeast Europe in the Middle Ages, which was spliced with significant periods when it was the subject of the Byzantine and Ottoman empires, respectively. Apart from a period between the 12th and 13th centuries – interrupted by a Mongol invasion – the country only gained its independence again in 1878.

An ally of Germany in both world wars, the country became a communist satellite state of the USSR in 1945. The fall of the Berlin Wall in 1989 and the Soviet Union’s collapse saw Bulgaria go through a painful period of transition to capitalism, like most other southeast European countries.

The communist period, in particular, has led citizens to distrust an overreaching government presence in their lives -- especially a government that does not seem to always be the most efficient or particularly interested in placing the well-being of its citizens before its personal interests, which continues to be the main complaint against Borissov.

It is precisely this wariness that has caused widespread vaccine hesitancy.

“Vaccine hesitancy in Bulgaria is mainly due to the lack of a sustained state-supported campaign in favour of vaccination. Very little was done by the state, a month ago the first campaign to promote vaccination started,” explains Smilova.

The global distrust in the AstraZeneca vaccine – seen across several countries in Europe in particular – also did not help.

“Even though we haven’t had problems with access to vaccines, we have a much higher supply of AstraZeneca compared to Pfizer and Moderna. The reported adverse effects related to AstraZeneca is one of the reasons why people started to doubt whether they should get vaccinated at all,” she said.

For some, it also meant that they should doubt the existence of the virus altogether, with an estimated one-third of the population belonging to that group.

This is a large electorate in the eyes of domestic politicians. A number of mostly populist or outright nationalist actors vying for power in the upcoming round of elections are trying to bank on this sentiment. Election debates weeks before the vote commonly feature marginal and nationalist parties voicing COVID-sceptical sentiments.

“Vazrazhdane, a far-right ultranationalist party has been the main voice campaigning against vaccination, and they are on the cusp of passing the threshold to enter parliament. But even centrist parties have toyed with this rhetoric,” Smilova said.

The proclaimed anti-elite “Ima takăv narod” (There Is Such a People) party headed by TV host and musician Slavi Trifonov that came first in July also played with anti-vaccination sentiments in the run-up to the July elections.

Despite the victory, Trifonov’s party struggled to form a government and is expected to perform worse this time around. Now, they are choosing to ignore the nightmarish situation in the country altogether in their campaign.

Parties that crossed the threshold in July, such as Democratic Bulgaria and Stand Up! Get Out!, as well as IMRO led by the right-wing nationalist Krasimir Karakachanov, who didn’t make the cut in the previous election, are all scrambling for support in the run-up.

But according to Smilova, parties that don’t overtly participate in COVID-scepticism are also to blame for not trying to be the voice of reason. On the contrary – some openly ridiculed the danger posed by COVID-19 instead of taking a strong stance in favour of vaccination, she said.

“Many of them got infected during the second or third wave, and after recovering they made statements saying they won’t get vaccinated yet,” Smilova illustrated. “A lot of politicians in Bulgaria were either fuelling anti-vaccine sentiments or not doing anything to stop them.”

The only parties with a pro-vaccination platform are the Turkish minority party, Movement for Rights and Freedoms, and Gerb.

It is president Radev who can stop the country from being further ravaged by the virus, Smilova believes – but not before the elections.

“The responsibility for solving the issue lies with the president. He is the one who appointed the caretaker government,” she said.

“He is the only one who can basically take responsibility now, however, I don’t expect him to do it because he’s running for re-election. So I don’t expect things to change before the elections in November,” Smilova concluded.