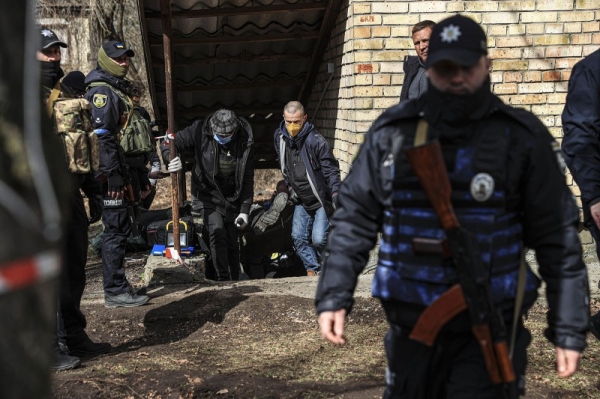 The number of civilian casualties may be much higher in Borodyanka and other liberated Ukrainian cities than Bucha, Ukrainian President Volodymyr Zelensky said in a video address on Monday.
“There is already information that the number of victims of the occupiers may be even higher in Borodyanka and some other liberated cities. In many villages of the liberated districts of the Kyiv, Chernihiv and Sumy regions, the occupiers did things that the locals had not seen even during the Nazi occupation 80 years ago. The occupiers will definitely bear responsibility for this,” Zelensky said.

In Bucha, Zelensky said there were more than 300 people killed, but that the total number of casualties will likely increase as the whole city is checked.

Zelensky underscored the importance of journalists documenting the aftermath in liberated Ukrainian cities.

“We provide maximum access for journalists to Bucha and other liberated cities of Ukraine. For hundreds of journalists from around the world. And we are interested in having thousands of journalists there. As many as possible! For the world to see what Russia has done,” he said.

Zelensky cautioned that Russia will try to cover up the traces of violence committed in Bucha and other cities.

“They are trying to distort the facts. But, as then, they will not succeed. They will not be able to deceive the whole world,” Zelensky said.

Zelensky repeated his plea to be sent more weapons to fight Russian forces.

“I emphasize once again: Ukraine must get all the necessary weapons to drive the occupiers out of our land as soon as possible, to liberate our cities. And if we had already got what we needed - all these planes, tanks, artillery, anti-missile and anti-ship weapons, we could have saved thousands of people,” he said.

Meanwhile, Ukrainian officials showed international media the removal of five bodies from a basement in Bucha, a suburb of Kyiv recently retaken by Ukrainian forces.

A CNN team visited the basement and saw the bodies before removal. They were in advanced stage of decomposition.

Five men had been tortured and executed by Russian soldiers, an adviser to the Ukrainian interior minister, Anton Gerashchenko, told CNN on the ground. CNN cannot independently verify Gerashchenko’s claims.

The men were found in an area held by the Russian military until a few days ago. Several foxholes, trenches and positions for armored vehicles were still visible around the site, as were leftover Russian rations. Several "V" letters — informal symbols for the Russian military campaign — were also painted at the entrance to the territory.

The dead men had their hands tied behind their backs and most of them had several gunshot wounds, not just to the head, but also to the lower limbs. There were several cartridge casings on the floor next to the bodies.

Volunteers removed the bodies and placed them in body bags, which were later taken away.

A volunteer told CNN they have been recovering bodies in large numbers, saying, “it’s in the hundreds, not dozens.” The volunteer and his unit showed CNN the body bags of at least 30 people who had been recovered on Sunday, plus an additional nine on Monday, including the five found in the basement.

President Joe Biden on Monday said the atrocities allegedly committed by Russian forces in Bucha, Ukraine, are a "war crime" and called for a trial to take place against Russian President Vladimir Putin.

The US President did not, however, label the killings a "genocide" but said he was looking into additional sanctions against Russia.

Biden said the images coming from Bucha warranted calling Putin a "war criminal," adding, "but we have to gather the information. We have to continue to provide Ukraine with the weapons they need to continue the fight and we have to get all the details so this can be an actual — have a war crime trial."

White House national security adviser Jake Sullivan said later Monday that the US hasn't yet seen evidence of "systematic" killings that would warrant designating what's underway in Ukraine a genocide.

"Based on what we have seen so far — we have seen atrocities. We have seen war crimes. We have not seen a level of systemic deprivation of life of the Ukrainian people to rise to the level of genocide," Sullivan said during a White House press briefing.

But the images from Bucha, Sullivan said, underscore that "now is not the time for complacency," stressing the importance of ongoing US support for Ukraine. He said the administration is "working around the clock" to fulfill security assistance requests from Ukraine, detailing the US and allied response so far and hinting at forthcoming "additional military assistance in the coming days."
#Joe Biden
Add Comment