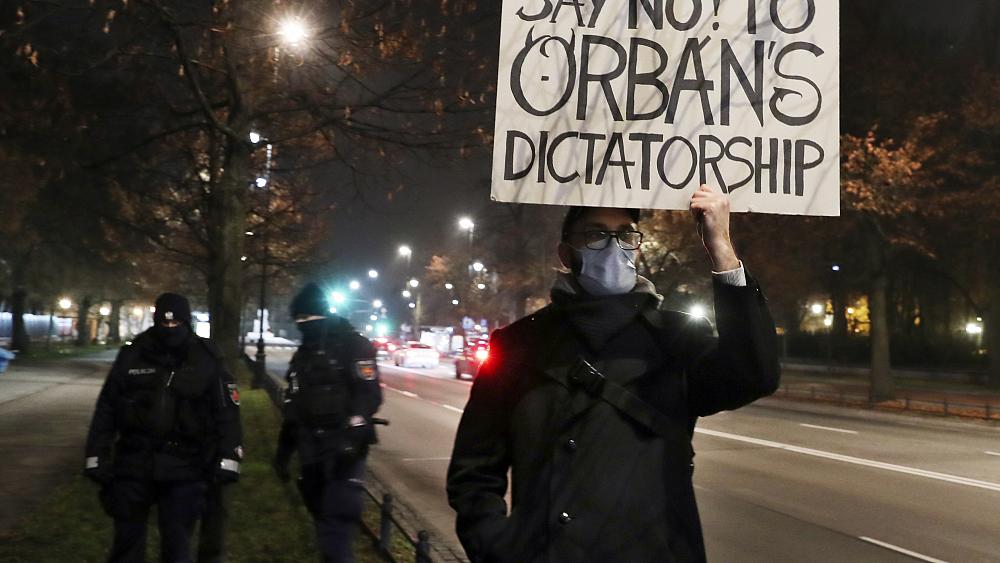 National sovereignty, families, and borders were the hot topics in Budapest in mid-November as Santiago Abascal, leader of Spain’s far-right Vox party, met with Viktor Orban.

The strongly conservative views expressed would not have been out of place in the 18th century Carmalite Monastery, which the Hungarian prime minister symbolically converted into his office two years ago.

Abascal was just the latest to make a pilgrimage to Budapest to talk with the self-styled spiritual leader of European illiberalism in recent weeks.

The meetings come as nationalist-populist parties prepare for a conference in Warsaw on December 3-4 where they’ll discuss building an alternative EU power centre that would fight the bloc on migration, LGBTQ, and national sovereignty, among myriad causes they claim are part of an elite globalist plot.

“European nations should be based on tradition, respect for the culture and history of European states, respect for Europe’s Judeo-Christian heritage and the common values that unite our nations,” read a declaration signed by 16 parties in July.

It’s no surprise that Orban is at the centre of this apparent bid to unite Europe’s radical right parties.

The authoritarian prime minister of Hungary has long professed his ambition to leverage his reputation among nationalist conservative networks to lead an international force.

He has sought to accelerate things since the summer, with meetings with potential partners coming thick and fast.

Marine Le Pen, whom Orban formerly kept at arm’s length, has been welcomed in Budapest in recent weeks, as well as her emerging rival for French far-right votes, television pundit Eric Zemmour.

Poland’s nationalist-populist Law & Justice (PiS) government and Italy’s Lega are viewed as the other core members of the plan. Discussions with Polish prime minister Mateusz Morawiecki and Lega leader Matteo Salvini have become more frequent and formalised this year.

“The European right is in great need of renewal. And this can only happen if we forge alliances with one another,” Orban’s spokesman Zoltan Kovacs told Euronews. “The declaration [signed in July] has broken the ice. We have been building cooperation since, and we would like to see this process speed up in the coming weeks and months.”

Orban has been talking of uniting the hard right for years, but he’s found progress tough.

Quite apart from the inherent contradiction that an international nationalist bloc represents, several familiar obstacles remain.

“There are still a lot of issues on which they do not see eye to eye, including migration and the different approaches of Poland and the rest of the parties to Russia,” points out Edit Zgut, an expert on Hungarian politics at the Polish Academy of Sciences.

The governments of Hungary and Poland have pledged they will not accept any migrants from the flows stemming from the Middle East and Africa, and have rejected the EU’s efforts to impose quotas. Salvini, meanwhile, calls for distribution across the bloc of asylum seekers that have arrived in Italy and other southern states across the EU.

Under the influence of eminence grise Jaroslaw Kacynski, PiS considers Russia an existential threat. In contrast, Fidesz, Lega and many others that signed the declaration consider Moscow a strategic partner. Le Pen has never really jumped aboard the bandwagon aimed at knocking down LGBTQ rights.

But despite these issues, Orban has given his drive new impetus since his Fidesz party was finally ejected from the European People’s Party (EPP) in March.

The centre-right group, the largest in the European Parliament, had long been criticised for providing cover for Hungary’s illiberal sins.

Fidesz has become more “interested in [forming a right-wing alliance] because we have reverted to being bachelors in European politics,“ Kovacs said.

On departing, Orban declared frankly his ambition to start a new group, rather than joining PiS and Vox in the Conservatives and Reformists (ECR) or the more radical Identity and Democracy (ID), which counts Le Pen’s National Rally, Matteo Salvini’s Lega and Austria’s Freedom Party among its number.

“The values of Fidesz are not currently represented in European politics,” the Hungarian leader announced as he found himself out in the cold.

Yet remaining outside these groups is also better for the brand that Orban seeks to project at home: a major player busy shaping issues across Europe.

“Fidesz could join the ECR or ID anytime it wants,” says Daniel Hegedus, a Hungarian academic at the German Marshall Fund. “But it doesn’t because Orban wants to control the process.”

Given the emphasis on the radical right of the image of a strong leader, that’s an issue that all of the parties face. The slow progress towards a unified group sparks suspicion that few of them are really that committed.

“These negotiations are not necessarily about crafting a coalition,” Zgut says. “Orban and Le Pen are both determined to be seen as power brokers who have allies to talk to in the EU.”

Meanwhile, just talking about it may be enough.

“The process has become the goal in itself,” suggests Hegedus. “It helps these radical right parties to control the agenda, mould policy and prove to their domestic audience that they’re taken seriously internationally. But an actual bloc wouldn’t offer anything strategic to any of them.”

That formal cooperation is unnecessary can be seen in the way that the radical right agenda has gained influence across the EU, opening the way, for instance, to migrant pushbacks and fences.

Perhaps the strongest result is the success that Poland and Hungary have had in supporting one another in their confrontations with the EU over their abuse of the rule of law.

But there are signs that the strength of the parties may be starting to ebb. Orban looks due to face his first significant challenge at the ballot box in years in the spring, and PiS has been struggling to hold onto its majority. Both Le Pen and Salvini are now battling competing radical right forces at home.

There have been suggestions that the return to the headlines of topics like migration, COVID-19 restrictions, and surging inflation could help boost their fortunes once more. However, it will do little to encourage formal cooperation, given that the views of these nationalist parties are almost by definition widely split.