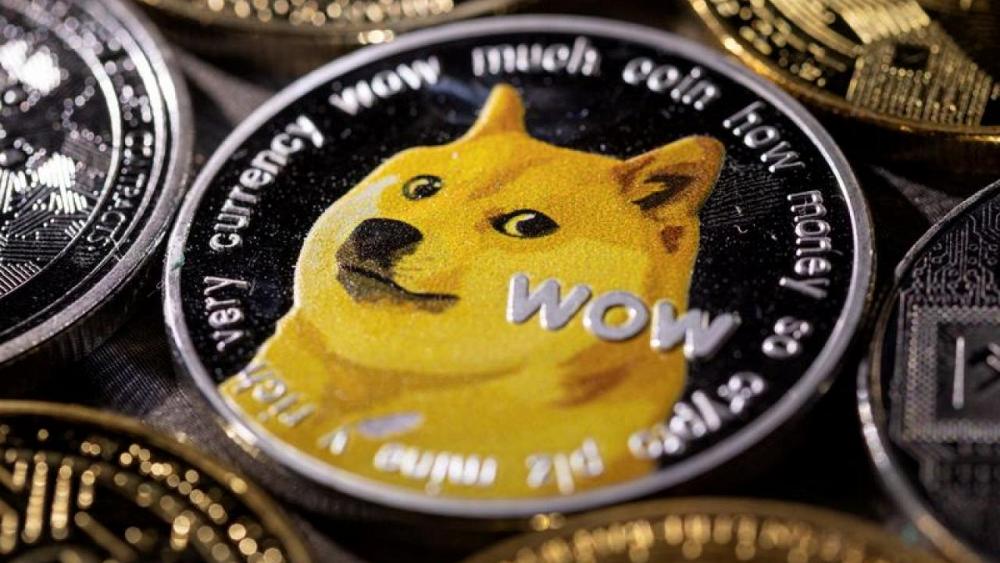 Why 2021 was cryptocurrency's wildest year yet

Bitcoin hit dizzying new heights, NFTs burst onto the scene and memecoins gained ground. All in all, 2021 has been a wild ride for crypto.

Bitcoin close to $70,000 (€61,800), "memecoins" worth billions of dollars, a blockbuster Wall Street listing and a sweeping Chinese crackdown: 2021 was the wildest yet for cryptocurrencies, even by the sector's volatile standards.

Digital assets started the year with a stampede of cash from investors large and small. And Bitcoin and its kin were rarely out of the spotlight since, with the language of crypto becoming firmly entrenched in the investor lexicon.

Here is a look at some of the major trends that dominated cryptocurrencies this year.

Bitcoin is still no.1

The original cryptocurrency held the crown as the biggest and most well-known token - though not without a host of challengers biting at its heels.

Bitcoin soared over 120 per cent from January 1 to a then-record of almost $65,000 (€57,400) in mid-April. Fuelling it was a tsunami of cash from institutional investors, growing acceptance by major corporations such as Tesla and Mastercard, and an increasing embrace by Wall Street banks.

Emblematic of Bitcoin's mainstream embrace was major US exchange Coinbase's $86 billion (€75.9 billion) listing in April, the biggest yet of a cryptocurrency company.

"It's graduated into the sphere where it is traded by the sort of people that are taking bets on treasuries and equities," said Richard Galvin of crypto fund Digital Capital Asset Management.

Yet the token stayed volatile. It slumped 35 per cent in May before soaring to a new all-time high of $69,000 (€60,900) in November, as inflation spiralled across Europe and the United States. 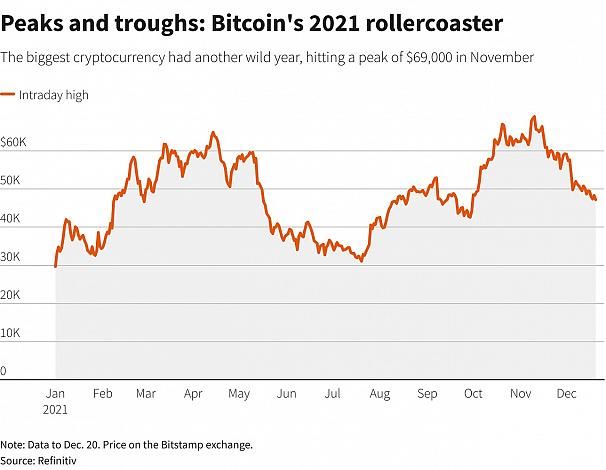 The rise of the memecoins

Even as Bitcoin remained the go-to for investors dipping their toes into crypto, a panoply of new - some would say joke - tokens entered the sector.

"Memecoins" - a loose collection of coins ranging from Dogecoin and Shiba Inu to Squid Game that have their roots in web culture - often have little practical use.

Dogecoin, launched in 2013 as a Bitcoin spinoff, soared over 12,000 per cent to an all-time high in May before slumping almost 80 per cent by mid-December. Shiba inu, which references the same breed of Japanese canine as Dogecoin, briefly muscled its way into the 10 largest digital currencies. 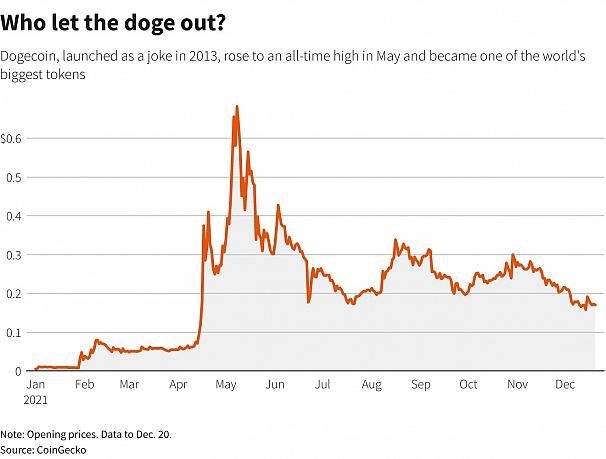 Who let the doge out?

The memecoin phenomenon was linked to the "Wall Street Bets" movement, where retail traders coordinated online to pile into stocks such as GameStop Corp, squeezing hedge funds' short positions.

Many of the traders - often stuck at home with spare cash during coronavirus lockdowns - turned to crypto, even as regulators voiced warnings about volatility.

"It's all about the mobilisation of finance," said Joseph Edwards, head of research at crypto broker Enigma Securities.

"While assets like DOGE and SHIB may in themselves be purely speculative, the money coming into them is coming from an instinct of 'why shouldn't I earn on my money, savings?'" 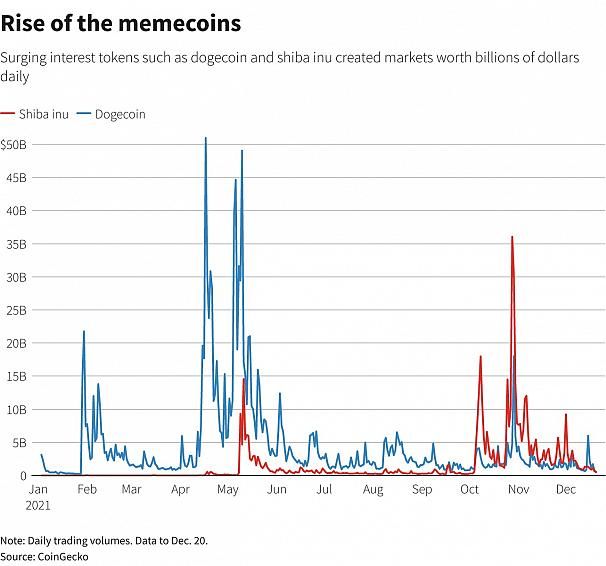 Rise of the memecoins

Regulation: The (large) elephant in the room

As money poured into crypto, regulators fretted over what they saw as its potential to enable money laundering and threaten global financial stability.

Long sceptical of crypto - a rebel technology invented to undermine traditional finance - watchdogs called for more powers over the sector, with some warning consumers over volatility.

With new rules looming, crypto markets were skittish to the possible risk of a clampdown.

When Beijing placed curbs on crypto in May, Bitcoin tanked almost 50 per cent, dragging the wider market down with it.

"Regulatory risk is everything because those are the rules of the road that people live by and die by in financial services," said Stephen Kelso, global head of markets at ITI Capital.

"The regulators are making good progress, they're catching up".

Non-fungible tokens (NFTs) - strings of code stored on the blockchain digital ledger that represent unique ownership of artworks, videos or even tweets - exploded in 2021.

In March, a digital artwork by US artist Beeple sold for nearly $70 million (€61.7 million) at Christie's, among the three most expensive pieces by a living artist sold at auction.

The sale heralded a stampede for NFTs.

Sales in the third-quarter hit $10.7 billion (€9.4 billion), up over eight-fold from the previous three months. As volumes peaked in August, prices for some NFTs rose so quickly speculators could "flip" them for profit in days, or even hours. 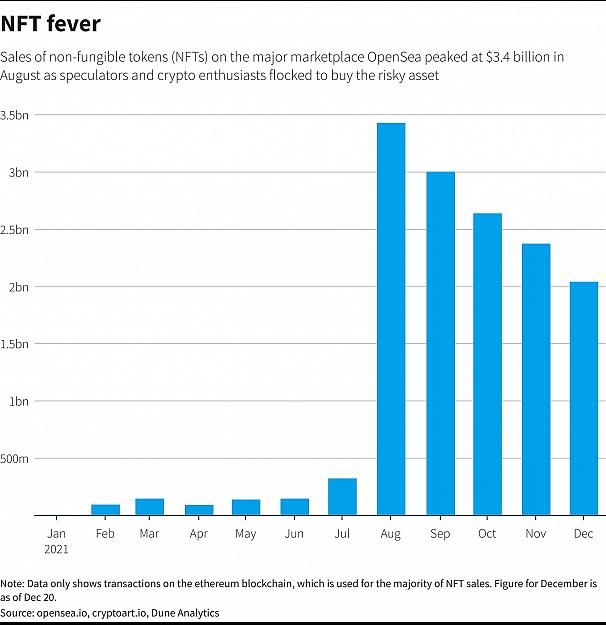 Soaring crypto prices that spawned a new cohort of crypto-wealthy investors - as well as predictions for a future of online virtual worlds where NFTs take centre stage - helped fuel the boom.

Cryptocurrencies and NFTs' popularity may also be linked to a decline in social mobility, said John Egan, CEO of BNP Paribas-owned research company L'Atelier, with younger people drawn to their potential for swift gains as soaring prices put traditional assets like houses out of reach.

While some of the world's top brands, from Coca-Cola to Burberry, have sold NFTs, still-patchy regulation meant larger investors largely steered clear.

"I don't see a situation where licensed financial institutions are actively and aggressively trading (these) digital assets in the next three years," Egan said.