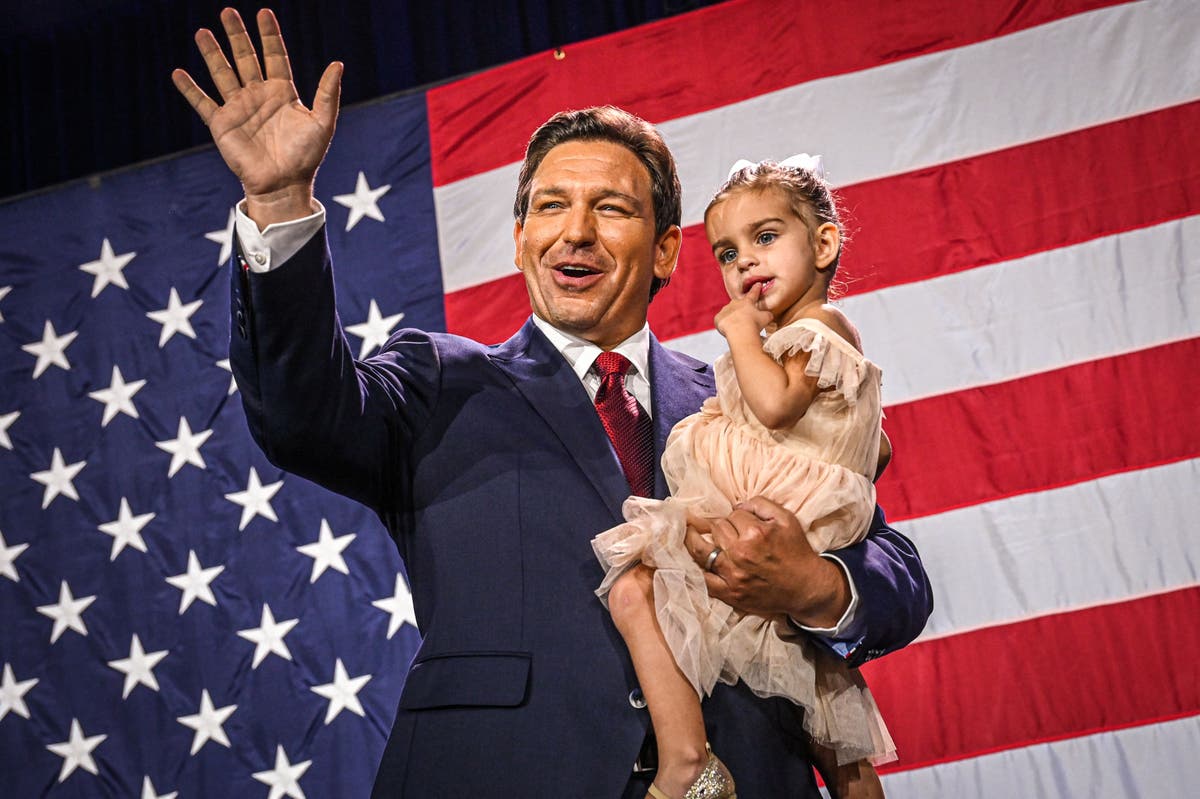 Who is Ron DeSantis? The Elon Musk backed governor people are calling the next Trump

The Tom Cruise-loving, Disney-hating pro-lifer is tipped to be one of the biggest candidates in the next race for president. Maddy Mussen uncovers some parts of Ron DeSantis you might not have seen on the news

This week, a man called Ron DeSantis was re-elected as governor of Florida, securing his second term. Now, it’s widely accepted he will be running for president in 2024.

In fact, it’s not only his campaign that’s widely accepted, it’s the fact that DeSantis is looking like a very legitimate threat. Not just to the Democrats, but to any Republicans standing against him, too - including the once-omnipotent Donald Trump.

His family has been described as looking like they are “ready-made for a campaign brochure”, he studied at Yale then Harvard (the school which has produced the most US presidents), he was in the Navy, he was captain of the baseball team - the list goes on. For better or worse, he’s the American dream.

But what does the 44-year-old governor actually stand for, how did he manage to secure the backing of one of the world’s most powerful men and new Twitter overlord supreme, Elon Musk, and why does he scare Trump so much? Let’s take a look. 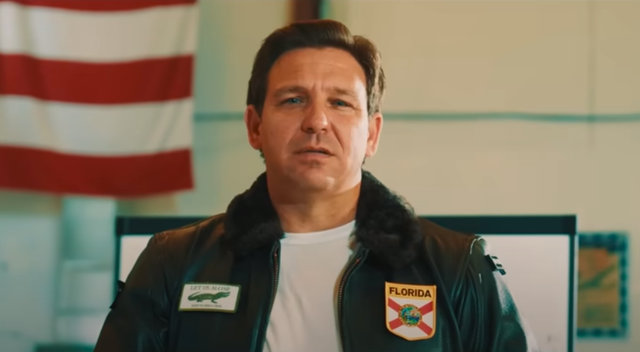 During DeSantis’s time at Harvard Law School, he was recruited to serve on the legal arm of the US navy, the Judge Advocate General’s (JAG) Corps, working with detainees in Guantanamo Bay. Yet his inspiration to make this choice came from an unlikely place: Tom Cruise in A Few Good Men. Cruise plays Daniel Kaffee, a US military lawyer who’s tasked with defending two US marines charged with murdering a fellow marine at the naval base in, you guessed it, Guantanamo Bay.

DeSantis has drawn on Cruise’s likeness many times since then, including during campaign videos, where he impersonates Cruise’s role in Top Gun (dubbed “Top Gov” in the video), clad in aviators and a G-1 flight jacket, and explains how to take down the “corporate media” as if he’s instructing troops.

And he hates Disney… but oh, he also got married there 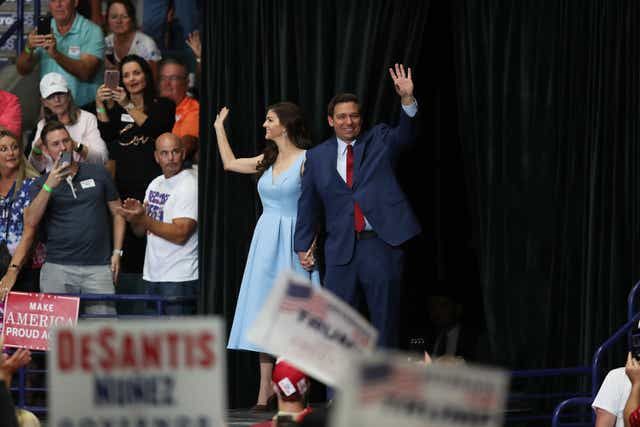 Ron and Casey DeSantis at a Trump campaign rally in 2018

One of DeSantis’s most prominent acts within his first term as governor was backing a bill now commonly known as “Don’t Say Gay”, which banned discussions of sexual orientation or gender identity in primary schools. Then Disney - which has a strangely prominent place in Florida politics due to its huge, money-making resort, Disneyland Florida - got involved. Bob Chapek, the CEO of Disney, said the company was firmly opposed to the bill after facing pressure to pick a side.

“It is clear that this is not just an issue about a bill in Florida, but instead yet another challenge to basic human rights,” an email to Disney employees, obtained by Rolling Stone, read. “You needed me to be a stronger ally in the fight for equal rights and I let you down. I am sorry.”

DeSantis didn’t like this one bit, and decided to strip Disney of its special status, which had allowed the corporation to operate in Florida with lower taxes for decades. “This state is governed by the interest of the people of the state of Florida, it is not based on the demands of California corporate executives,” DeSantis said in a speech following his decision.

And yet, pictures of Ron DeSantis’s wedding day obtained by Insider show that the governor married his wife, Casey, in 2010, in none other than… Disneyland Florida. Not great optics there.

His wife is a cancer survivor and ex-news anchor 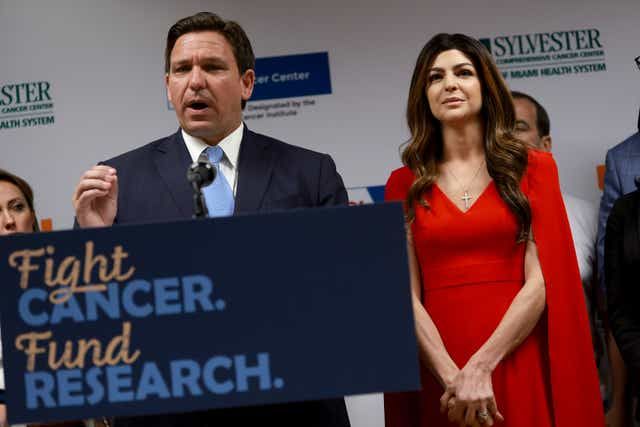 Ron DeSantis speaking at a Florida Clinical Research Centre alongside his wife, Casey

The First Lady of Florida, 42-year-old Casey DeSantis, has frequently been referred to as Ron DeSantis’s “secret weapon” in his political arsenal - even to Ron’s face, but he doesn’t seem to mind at all.

Casey DeSantis is a former news anchor and reporter, as well as a mother-of two and a cancer survivor. She was declared cancer-free in March 2022 and has spoken openly about her breast-cancer journey, including in campaign videos for her husband.

“When I was diagnosed with cancer, and I was facing the battle for my life, he was the dad that took care of my children when I couldn’t,” Casey DeSantis says in one video.

Most recently, the Florida First Lady helped spearhead much of the fundraising in the wake of Hurricane Ian, which ravaged the state, killing 109 people across 19 Florida counties and leaving 600,000 homes and businesses without power for days.

DeSantis is pro-life, but seems to be playing it down 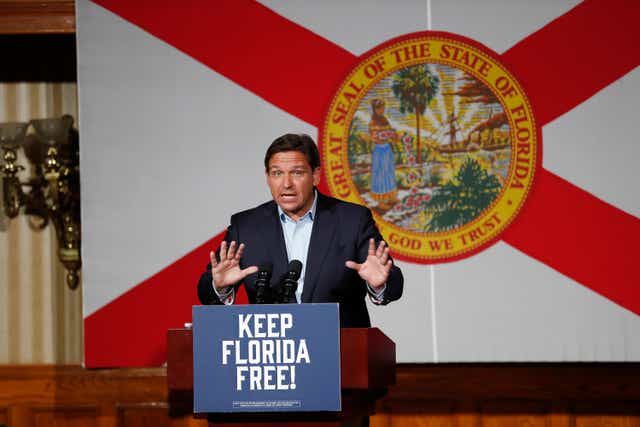 DeSantis speaks at a campaign rally ahead of Tuesday’s election

As well as ‘Don’t Say Gay’, DeSantis’s other notable political decision during his first term as governor was signing one of the strictest anti-abortion laws in the US, which came into effect on July 1. The Mississippi-style law bans most abortions after 15 weeks, with no exceptions for rape and incest, down from the 2-week standard that had been in place for nearly half-a-century.

However, the majority of Floridians are actually pro-choice. A statewide poll showed that actually, 57 per cent of those polled in Florida disagreed with the new 15-week legislation, and want less restrictions on abortion - not more. So, as you might expect with an election looming, DeSantis has been notably quiet about abortion over the past few weeks. He was forced to defend the bill in one debate, though, where he also made a string of false claims about abortion - saying that a foetus is fully formed by 15 weeks and can feel pain. Neither of these things is true. The governor also refused to confirm whether he would instate further abortion restrictions if he were to secure a second term, so now we just have to wait and see.

He’s supported by Musk and feared by Trump 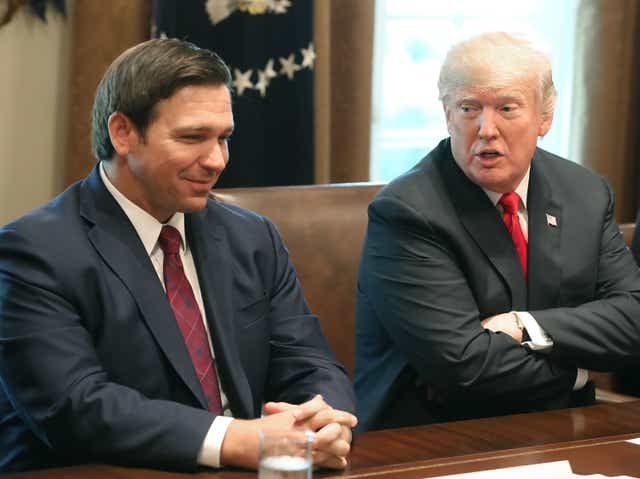 DeSantis and Trump together at The White House

DeSantis is being hailed as “the next Trump” by many, and seems to have the same ability to make headlines as the MAGA-pedalling ex-president.

“Trump was never about policy. He was all about attitude,” Heye explained. “DeSantis certainly engages in Trump tactics, but there are both political and policy goals in mind behind them.”

Perhaps this is why he is supported by the likes of Elon Musk and GOP mega donor Ken Griffin, both of whom are billionaires. Musk tweeted his support of DeSantis back in June, when asked who he was leaning towards for the 2024 presidential campaign, and further praised the governor in July, tweeting: “If DeSantis runs against Biden in 2024, then DeSantis will easily win - he doesn’t even need to campaign.”

You can see then why this would annoy Trump, who hates when things are not about Trump. The former president once endorsed DeSantis for governor, calling him a “tough, brilliant… cookie”, but since DeSantis’s sights have moved to Washington, Trump has changed his tune, most recently dubbing the governor “Ron De-Sanctimonious”.

But Trump isn’t as good at hiding fear as he thinks he is, and it’s clear that this Ron De-Santimonious has got him shaking in his boots. Whether that translates to a presidential bid, we’re yet to see, but it’s looking like just a matter of time.