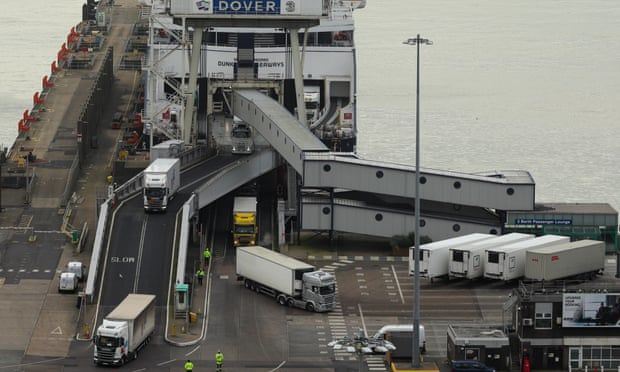 EU exporters of cheese, car parts and other goods are facing a mountain of red tape to continue sales to Britain after 1 January once thrice-delayed post-Brexit checks and controls are finally implemented.

They had been due to come into force on 1 January 2021 but were pushed back to July, then to October and finally to January 2022, with a further set of controls due six months later in the coming July.

In another twist just before Christmas, the British government announced a carve out for the Republic of Ireland, saying the checks would be delayed for goods crossing the Irish Sea while talks over the Northern Ireland protocol continued.

The British government is now confident there will be no further delays to the new controls on incoming goods, which will create a slew of old-school jobs in freight, customs and food standards not seen since the single market came into force in 1993. But what exactly is changing?

Complicated paperwork will be required by the UK tax authorities for all imports from the EU. Traders will no longer be allowed to defer completion of customs declarations for HM Revenue and Customs (HMRC), a measure that was introduced to cope with the disruption of Brexit.

How will this paperwork be submitted?

Exporters will have to “pre-lodge” the paperwork with the correct authorities themselves or through an agent before their goods are loaded on to a ferry or train at Calais or other entry points. “While many UK hauliers are well prepared for this change, we suspect many EU hauliers are not,” said HMRC’s permanent secretary, Jim Harra.

The carriers will be obliged to have records of the goods to allow HMRC to decide whether they will be free to go after arriving in Dover, Holyhead and other ports.

The paperwork doesn’t stop there. Declarations in relation to the rules of origin must be completed to determine whether tariffs are applicable or not. EU suppliers of agri-food products into Britain will also have to pre-notify the authorities of any exports.

The final set of controls on products of animal and plant origin will come into force on this date, with export health certificates and phytosanitary certificates required for all consignments.

Physical checks will take place on arrival, although these are likely to be random or determined by intelligence about the cargo. Safety and security declarations on imports will also be required.

Where will the checks take place?

HMRC has had considerable difficulties organising the sanitary and phytosanitary (SPS) control posts. During the summer it confirmed that it was dramatically reducing in size a planned facility close to the famous White Cliffs of Dover, with most paperwork now expected to be checked at its Ashford lorry park instead.

Dover Port Health Authority announced at the beginning of December it was to move to a new facility in the nearby village of Whitfield. The Department for Environment, Food and Rural Affairs has confirmed this is one of three potential SPS sites. Another will open at Ashford and a third site in Kent is still to be identified, a spokesperson said.

Will it all go smoothly?

By HMRC’s own calcuations, the number of customs declarations needing to be processed will rise from an estimated 48m a year to 250m now that they are required on goods arriving from all 27 EU states.

Harra told the parliamentary public accounts committee in November that the “biggest risk” was lack of readiness among EU traders, especially small to medium sized companies.

EU traders may experience the same kind of Brexit shock suffered by the Cheshire cheesemaker Simon Spurrell in January when he was left with a £250,000 hole in his export business as new requirements effectively closed down his retail sales to the continent.

Harra said HMRC was writing monthly to 14,000 EU haulage firms to make sure they were ready, with information booklets on the new rules provided in multiple languages.

Although the UK has been divorced from the EU for a year, the delays in applying import controls may have left some in the single market with the impression that they don’t exist.

The added cost of administration could encourage some traders to quit the British market altogether.

“Brexit red tape is an extreme interruption to what was otherwise a world-class logistics operation that was pin sharp,” said John McGrane, director general of the British Irish Chamber of Commerce.

“Many businesses might argue the UK has had six years to prepare for this and why aren’t all these checks online?”