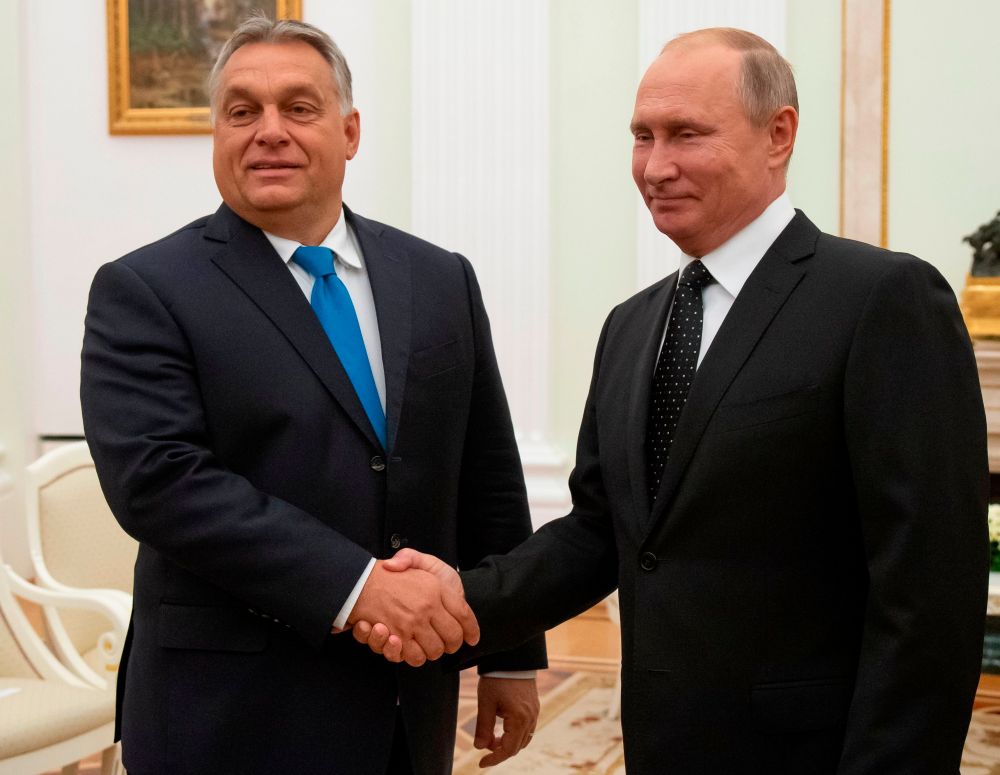 Hungary’s prime minister is committed to splitting the difference between Brussels and Moscow.
On March 15, Hungary celebrated the anniversary of its fight for sovereignty in 1848. This freedom fight was started against the Habsburgs, but in the end, the revolution succumbed to the joint forces of the Habsburg and Russian Empires.

Hungarian Prime Minister Viktor Orban delivered a speech for the occasion that did not reflect the day’s celebratory spirit. Instead, he addressed the war in Ukraine. He emphasized the importance of not adding to the prevalent hysteria, and of maintaining sufficient distance from Russia, Ukraine, the European Union, and the United States alike. He also said that Hungary needs to maintain the low energy prices produced by imports of Russian gas. Stopping short of condemning Russia’s brutal attack on Ukrainian sovereignty, he merely stressed the importance of keeping the peace—saying, Hungary should not get “between the Ukrainian anvil and the Russian sledgehammer” and labeling the country’s opposition, which has called for a united Western response to the conflict, “warmongers.”

On the very same day, Donald Tusk, a former friend of Orban and head of the European People’s Party (EPP), which included Orban’s Fidesz party until a year ago, spoke at an opposition rally in Budapest, Hungary’s capital—criticizing Orban for his pro-Russian President Vladimir Putin stance and his betrayal of Europe in an emotional and powerful speech. Elsewhere, in more extraordinary circumstances, the Polish, Czech, and Slovenian prime ministers traveled to the besieged capital city of Kyiv, Ukraine, to show solidarity and support for the nation’s people. When Orban was asked by journalists why he had not attended, his press officer responded, “The premier is aware of the visit, but he is not planning to go to Kyiv at the moment.”

These wartime scenes and others like them reveal how isolated Orban has become, even among his neighbors in Central and Eastern Europe. Although Orban is mostly swimming with the EU and NATO tide on sanctions, he is doing so reluctantly. This reluctance can be traced to three main causes.

The first is economic. In the last 12 years, Orban has strengthened Hungary’s ties with Russia and other Eastern dictatorships, arguing for pragmatism in foreign trade and business. The ruling Fidesz party has invested a lot in its bilateral relationship with Russia, including numerous business ties, such as extending the Paks Nuclear Power Plant by Russian energy giant Rosatom; purchasing new metro wagons from Russia; supporting engineering company Metrovagonmash against a Hungarian applicant in an Egyptian tender; and moving the headquarters of the International Investment Bank, Putin’s spy bank, to Budapest. But these projects have tended to benefit private rather than public interests.

The second reason is ideological. Although he justified building up his close relationship with Russia, citing national interests, the ideological proximity between Orban’s Hungary and Putin’s Russia has become more and more apparent. Since 2014, when the Hungarian premier first mentioned Russia as a role model, Orban has been a standout in bashing Western liberal democracies for their alleged softness, weakness, diversity, and lack of “traditional values.” Many of his steps were inspired by Putin. He centralized the media—as Putin did after the Kursk submarine catastrophe—by using the Kremlin playbook via buy-ups by Fidesz sympathetic oligarchs and has vigorous attempts to stamp out independent and critical media, as evidenced by the hostile takeover of news website Index and the persecution of Budapest’s Klubradio. He has sought to follow Russia’s model in creating a “fortress Hungary” based on anti-Western conspiracy theories. He has passed legislation diabolizing foreign-funded nongovernmental organizations, which European courts have intervened on, and criminalized the “promotion of homosexuality” under the flag of fighting pedophilia. Of course, Orbán did not go as far as Putin: while Putin’s Russia is increasingly totalitarian, Orbán’s Hungary is still a hybrid regime with an authoritarian direction.

The third reason is geostrategic. Orban hoped his policies of the past 12 years would fit a new global order, one marked by the collapse of the West and the rise of the authoritarian systems of Russia and China. This wishful thinking led to a total failure of strategic foresight: Orban’s close relationship with Putin blinded him from the obvious threats Russia posed not only to Ukraine but to Western democracy—and the ways the West would respond to that threat.

Orban was positive that Putin would not attack Ukraine. When he did, Hungary’s messaging was in chaos for about a week. The government communicated every possible message to voters, from the most hawkish, pro-Atlantic line to the most irrational pro-Russian conspiracy theories. Orban initially supported the sanctions, called Ukrainian President Volodymyr Zelensky to offer support, and let Ukrainian migrants in. Hungary quickly stopped blocking Ukraine’s EU and NATO accession efforts, and it seemed like Hungarian diplomacy might return to a state of normalcy.

But after just a week of planning and polling the mood, this all fell away, and the Fidesz government settled on a winning message, which would straddle both sides of the debate and stimulate a rally round the flag effect in Hungary, with just weeks to go until its parliamentary elections. The two prongs of this message were repeated by Orban in his March 15 speech: peace and cheap energy. Orban has sensed the security concerns of his voter base—which the lower-middle class and pensioners are increasingly overrepresented—and he is seeking to maintain continuity with his pre-war pro-Putin rhetoric, even during these extraordinary circumstances for the world.

Orban practically expressed a need for neutrality and equal distance from the West and the East in his most recent speech—despite the fact that Hungary is a member of the EU and NATO. He is balancing his loyalties to the Kremlin with EU and NATO cash and security. The pro-government state media is spreading conspiracy theories on levels comparable to those disseminated by propaganda mouthpieces like RT, blaming Ukraine, NATO, and the United States for “provoking” Russia, parroting that Ukraine is a “Nazi junta,” and inventing stories about nuclear weapons being prepared by Ukrainians. The rationale behind the war, according to a widespread interpretation pushed by the Fidesz-packed state media, is that the United States, as a warmonger, wants to sell its energy and weapons to Ukraine. Orban referred to this suspicion in his speech, saying, “We Hungarians know very well who reaps the benefits of such wars.”

But actions speak louder than words. While all other Central and Eastern European countries quit cooperation with Russia’s International Investment Bank, Hungary did not. The Paks Nuclear Power Plant, a project between Hungary and Russia, will be extended as planned. The government blames the “Brussels sanctions” for Hungary’s plummeting currency and is expressing reluctance to prolong them in EU votes.

The Russian media still refers to Orban as the positive example in the West, a clear sign that Orban is still towing the Kremlin line. State-sponsored TASS Russian News Agency likes to quote Orban’s strong opposition to energy sanctions against Russia and Russia Today loves his reserved remarks on NATO.

As a result, Hungarian public opinion is split on how the country should act, with widespread relativization of Russian aggression and commonplace Ukraine-bashing and conspiracy-theorizing. The government is mainly regarded as competent in handling the situation, and Orban’s electoral standing has not been shaken by the conflict. This is especially remarkable given the humiliations and climb-downs of Kremlin-sympathetic voices elsewhere, including former Italian Deputy Prime Minister Matteo Salvini and French presidential candidate Marine Le Pen.

As the war drags on, in contrast to Russian expectations, the Hungarian government is trying to maintain its membership in Western alliances while cozying up to Russia. But Orban’s room is now limited: His reluctant support for the EU sanctions package after failing to block it shows underscores the power of the Western alliance. But as time passes and Europe becomes accustomed to the war, ever more voices will be heard complaining about the costs of sanctions and arguing for a possible coexistence with Russia. Orban wants to be the earliest voice in this choir.

If Orban remains in power beyond April, he will threaten the West by breaking the unity surrounding sanctions and using them as a bargaining chip in future European Council decisions, blackmailing his so-called allies with vetoes. Hungary’s election will soon decide how much longer the specter of Putinism will haunt Europe.
#Viktor Orban
Add Comment