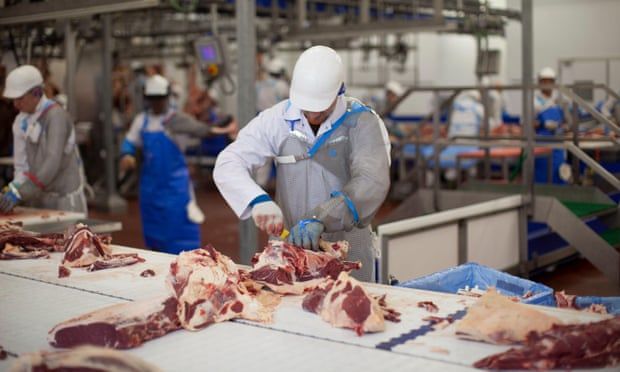 Move comes weeks after farmers began culling healthy pigs owing to lack of abattoir staff
The government has stepped in to counter a spiralling crisis on pig farms by allowing butchers to enter the UK on temporary visas, in the latest reversal of post-Brexit immigration policy.

Butchers in abattoirs and meat processing plants dealing with pigs will be allowed to come to work in Britain for six months, the environment secretary, George Eustice, announced on Thursday evening. He said 800 butchers were needed to meet staffing shortages and get the situation under control.

“That will help us to deal with the backlog of pigs that we currently have on farm, give those meat processors the ability to slaughter more pigs, and crucially as well we are going to make available what is called private storage aid to help those abattoirs to temporarily store that meat,” Eustice said.

Ministers also launched a consultation on extending cabotage rights, allowing foreign HGV drivers to make unlimited journeys for two weeks within the UK before returning home. Under the current rules drivers can only make two trips within seven days.

The intervention comes several weeks after farmers began culling healthy livestock because of a lack of staff in abattoirs where the animals are processed. In the last week alone, thousands of pigs are reported to have been destroyed.

A backlog of as many as 120,000 pigs were estimated to have been stranded long after they should have gone to slaughter, with pens becoming overcrowded and farmers forced to call in specialist teams to dispose of the surplus animals.

The storage aid scheme allows producers to store slaughtered pigs for between three and six months, so that they can be preserved safely and processed at a later date when the supply chain is under less pressure.

The government said the package of measures designed to help pig producers would include introducing processing of animals on Saturdays, as well as longer working days at processing plants.

In addition, ministers confirmed they would suspend for a month a levy on pork products for producers in England and Scotland, resulting in estimated savings of £1m for the sector.

However, they rejected calls for the government to remove the requirement for trained butchers from abroad to speak fluent English.

The meat industry is one of the many sectors of the UK economy struggling with labour shortages exacerbated by Covid-19 and Brexit, while a lack of HGV drivers has also disrupted supply chains.

Ministers had previously told farmers and processors they needed to employ more British workers instead of relying on labour from abroad.

The move is just the latest government U-turn on allowing seasonal workers from abroad into the UK to staff the food production and processing sector.

In the face of mounting food and fuel shortages, the government announced last month that it would grant 5,000 temporary visas to non-UK lorry drivers – although senior minister admitted on Wednesday that only 20 had been issued so far. Also promised was a further 5,500 visas for seasonal poultry workers that would last until 31 December.

Duncan Berkshire, a pig vet in Yorkshire who has been involved in discussions between the sector and ministers, cautiously welcomed the announcement on butchers.

“We are pleased that government has listened to us and responded at last. It is good to see some engagement, that is great,” he said.

He added: “We were hoping for longer. I am concerned over how many will want to come just for six months and if there is a limit on numbers, that will only get a bit of the system working and we will still end up with significant numbers of pigs left on farm.”

Berkshire said he was aware of thousands of pigs having been culled on farms over the past week, as a result of the backlog.

According to the British Meat Processors Association, non-UK workers account for two-thirds of a workforce that is missing 15% of the 95,000 people the meat processing industry usually employs. Reports suggest about 1,000 temporary visas could be issued.

The UK’s food and drink industry has been calling for a special year-long “Covid-19 recovery visa” to recruit overseas workers to help ease disruption in the food supply chain and to allow the hiring of butchers, chefs and other food industry workers.