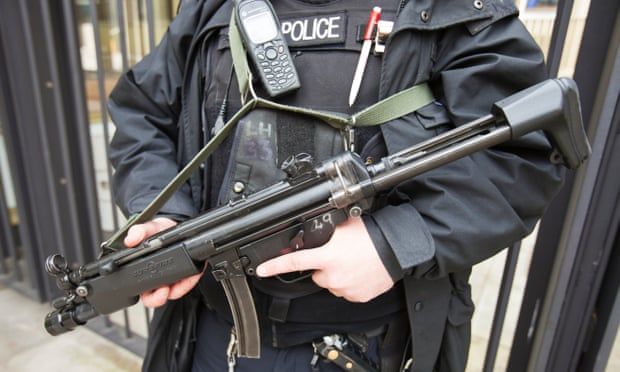 Policing, border control and surveillance have become increasingly militarised in the UK and infiltrated by a “war mentality”, according to a report.

It says there is an increasingly blurred line between the police and the military and that key areas including counter-terrorism, anti-protest policing, border control and the policing of gangs have adopted a war mentality.

The report from Campaign Against Arms Trade (CAAT) and the Network for Police Monitoring (Netpol) describes the hyper-militarisation of British policing agencies as “deeply troubling”.

The increased use of hi-tech surveillance tools such as phone data extraction technology, mobile fingerprint scanners and live facial recognition technology are among the techniques that the report expresses concern about. People of colour are identified as being at greatest risk of being targeted.

While not all of these techniques are new, the report – A Very British Problem: The Evolution of Britain’s Militarised Policing Industrial Complex – maps their increasing use in recent years and says the technology “vastly tips power in favour of the state”.

It expresses concern that surveillance technology is being rolled out in the absence of sufficient legislative or parliamentary oversight. While many organisations are involved with the deployment of technologies such as AI and facial recognition, there is no single body guiding the adoption of these new technologies.

Key areas of concern include:

*  Mobile fingerprint scanners, which many police forces now use and are linked to the Home Office’s immigration and asylum biometric system, which holds the fingerprints of non-UK citizens who have entered the country.

*  The Home Office biometrics programme, a new digital system to allow biometric and other data to be shared seamlessly between police, immigration enforcement and other government departments.

*  Use of military-grade drones to patrol the Channel to carry out surveillance on asylum seekers crossing in small boats.

*  A gangs matrix that profiles people believed to be gang members, whether or not they have committed any crime. A 2016 survey of the matrix by Amnesty International found that 87% of those on it were from BAME backgrounds.

The report’s author, Dr Keren Weitzberg, said: “The police are increasingly relying on hi-tech, data-driven and military-grade technology to surveil the British population.”

Sam Perlo-Freeman, a research coordinator at CAAT, said: “Policing in the UK is becoming steadily more repressive, but it’s not just about what the UK is doing to its own citizens. The UK trains foreign police and security services, especially around border control.”

Emily Apple, a communications coordinator at Netpol, said: “This report busts the myth that the police in the UK govern, or have ever governed, by consent. It lays out what those from marginalised communities know all too well, that institutionalised and structural racism results in overpolicing, excessive force and disproportionate criminalisation.

With the Police, Crime, Sentencing and Courts Act, we’re more likely to see increased criminalisation and surveillance of protesters. It’s down to all of us to monitor what the police are doing and to defend our right to dissent.”

The Home Office said: “All policing and law enforcement practices are underpinned by some of the most robust guidance and laws in the world and to suggest otherwise is wrong.

“Agencies, including police, immigration enforcement and Border Force will face times when they put themselves in danger to deliver for the public, so it is only right they are trained and deploy to the highest standards.”