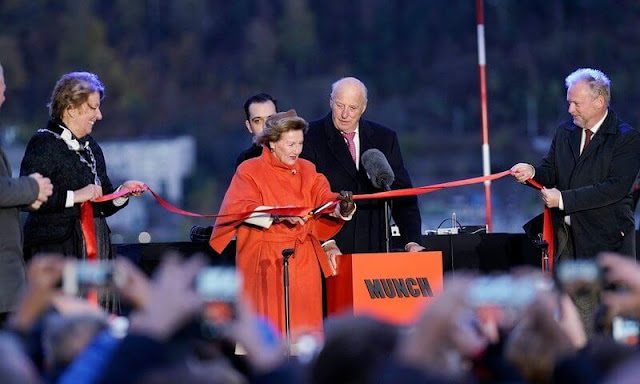 Each country has its famous figures, and a proud Norwegian might list for us such internationally known luminaries as playwright and poet Henrik Ibsen, explorers Roald Amundsen and Thor Heyerdahl, composer Edvard Grieg, author Jo Nesbø, footballer Erling Braut Haaland, World Chess Champion Magnus Carlsen… and painter Edvard Munch. Notables all, but it is only the latter who has the honour of a colossal brand-new museum in prime position on the Oslo waterfront.

Furthermore, when the museum opened to the world this October 22, Munch’s national and global status was given its due imprimatur when King Harald V and Queen Sonja of Norway performed the opening ceremony outside the monolithic-looking building. They then had a private guided tour of the museum said to be one of the world’s largest such institutions devoted to a single artist. Thus it is the number one destination to experience the life and art of a man whose insecure emotional state is described as tortured and brooding.

The bare statistics alone are impressive: a competition to design a landmark building was won by a Spanish architecture firm, and the imposing result, set on 300 piles and surrounded on three sides by the Oslo Fjord, has been tailor-made to display the full range of the most comprehensive collection of items by Munch.

The core of the display was bequeathed by Munch to the city of Oslo upon his death on January 23, 1944, which secured his legacy. The collection includes more than half of his known works, some 26,700 paintings, prints, photographs, drawings and watercolours ranging from 1873.

Despite such a prolific output, it is nigh impossible to consider Munch without mention of the striking painting “Skrik”, to give it its Norwegian title, which translates as “Shriek” but is universally known as “The Scream”. It is considered one of the great icons of art in the world, and in fact this enigmatic depiction came in a number of versions. The museum’s “Skrik” collection includes one painting, an early study in pastel from 1893, several drawings and six lithographs of Munch’s most famous motif.

One of the 11 galleries taking up a total 4500 square metres has three versions of “The Scream” on display: the painting, a drawing and a print. They are shown one at a time in rotation for an hour each, the other two sitting in darkness behind shutters, awaiting their turn. This 1910 painted version of “Skrik” has a fiction-worthy history, having been stolen on August 22, 2004 when masked gunmen entered the previous, much smaller Munch Museum in Tøyen, Oslo, during daylight and stole both it and the artist’s “Madonna”, another of his notable works. 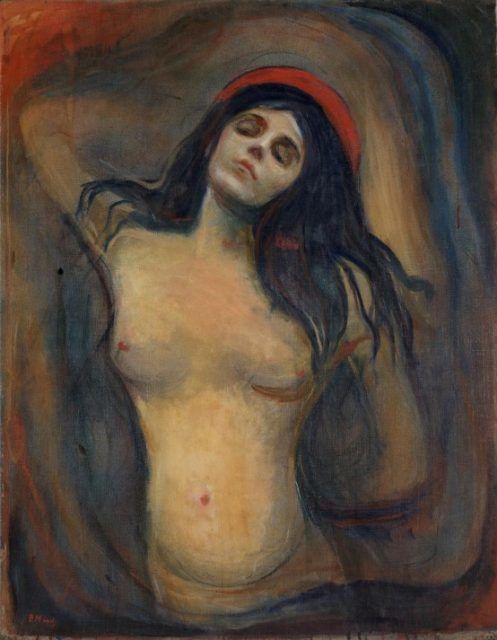 The paintings were not recovered until August 2006, and “The Scream” had some moisture damage to the lower left corner. This underwent restoration but the colour remains a little lighter than the rest of the painting, as can be clearly seen today. “Madonna” too needed some slight patching up but the situation could have been worse. The paintings were not recovered until some three months after three men were jailed for the thefts, and the police did not give details about the circumstances of the recovery.

According to Munch, the inspiration for the painting came when he was out walking at sunset and “heard the enormous, infinite scream of nature”. The agonised face is widely identified with the angst of the modern person, an expression of isolation and fear. While the artist is best-known for “Skrik/The Scream”, he also experimented with various media and techniques described as being at the edge of modernism, and in addition to the paintings, watercolours and woodblock prints for which he is best known, he bought a Kodak camera in 1902 and is recognised today as one of the first artists to dabble in self-portrait photography. 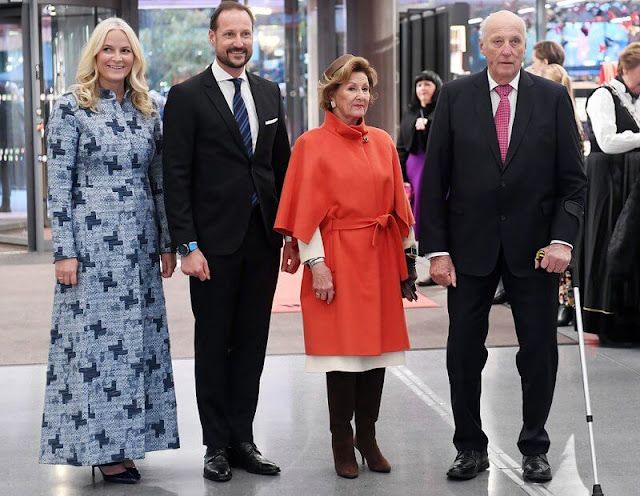 The museum’s collection also includes thousands of other items from Munch’s original bequest to the city, such as his printing plates and lithographic stones as well as thousands of letters and some 10,000 objects from his personal belongings. A large and heavy album titled “The Tree of Knowledge”, in which he compiled drawings, prints and texts written in colourful letters, is on display, though no one knows exactly why he created it. Other highlights are monumental mural paintings including “The Sun” from 1909, which stretches eight metres.

Munch was born on December 12, 1863, in Løten, Norway, and he died in Ekely, near the capital, on January 23, 1944, age 81. The city opened the museum in his honour in Tøyen but this has now been superseded by the new construction at five times the size. This allows for a fourfold increase in exhibition areas, and is said to finally give Munch the space he deserves.

The artist is rather an ever-presence in Oslo, and perhaps the rest of the country too. A new National Museum will open in the Norwegian capital in June 2022 and it will have a Munch Room displaying 18 paintings, including their own “Skrik”, painted in 1893 (and victim of another theft and recovery in 1994). The National Museum has 57 Munch paintings in its collection and six other rooms will also display some of his work, placing it in context with his contemporaries. The museum began collecting Munch in the 1890s and its “Skrik” was received as a donation in 1910. 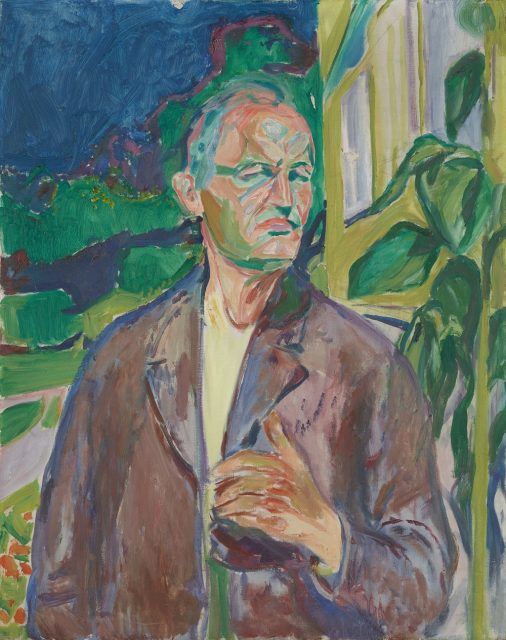 A self-portrait by Edvard Munch

One of the great sights of Oslo is the imposing Rådhuset, the City Hall, where anyone can wander in and view its tremendous decorations of great Norwegian art from 1900-1950, with motifs from national history, culture and working life. Here the Nobel Peace Prize is awarded in a solemn ceremony each year on December 10, the anniversary of Alfred Nobel’s death. There is a Munch Room in the Rådhuset, with one painting, “Life”.

In 1914 Munch was commissioned to decorate the new assembly hall at the University of Oslo, and on September 19, 1916 the university received the 11 oil paintings that still cover the walls. These are said to be the only decorations by Edvard Munch that can be viewed in their original context, and “The Sun”, “Alma Mater” and “History” are the main pictures.

American pop artist Andy Warhol admired Munch and he visited Oslo in 1973 to view his works at the National Gallery and the Munch Museum in Tøyen. In 1983-84 Warhol produced a series of 15 prints with images taken directly from some of Munch’s most renowned motifs. Two of these Warhols are on display in the reception of our hotel, the Clarion Hotel Oslo – his “copy” of “The Scream” and “Madonna and Self-Portrait (after Munch)”. 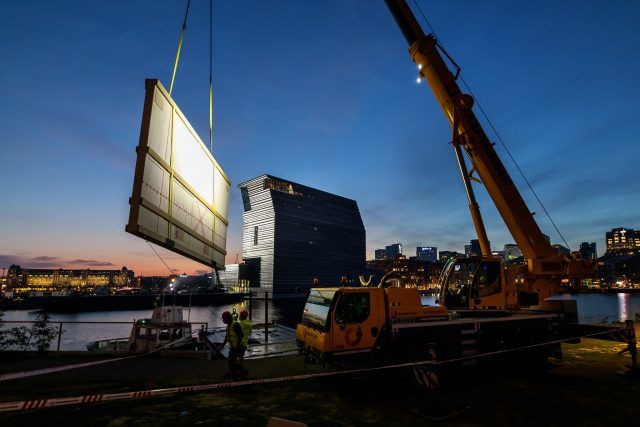 The Sun, on the move from the old museum (new museum in the background)

And there is the Freia Frieze, which Munch painted for the workers’ canteen at the Freia chocolate factory in Oslo. Munch himself described this “Frieze of Life”, saying it had been “conceived as a series of decorative pictures that together are to give an image of life. Running through them winds the curving seashore, beyond which is the sea that is constantly in motion, and under the tree-tops life in all its diverse forms is lived, with all its joys and sorrows.”

There must have been scores of books written about the artist, and a display of some of them features in the lobby area of the Deichman Bjørvika, Oslo’s new main library that opened in June 2020 and which holds some 450,000 books and other media. The strikingly attractive library is next to the strikingly attractive Oslo Opera House that opened in 2008, both part of a grand scheme to transform the city’s waterfront.

Next to these is the new bespoke MUNCH Museum, opened this October 22, 2021 by the royal couple. If only artists could live on, and see how their legacy endures. 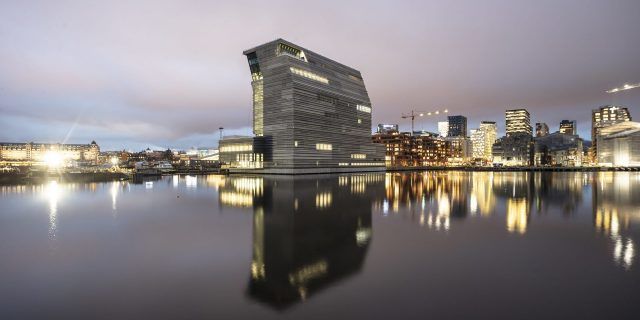