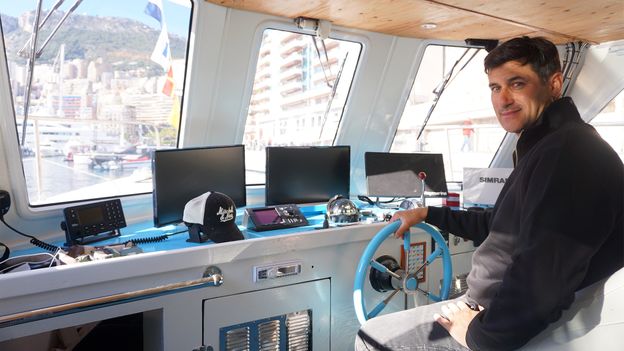 The last fisherman of Monaco

In a sea of pleasure yachts, the number of Monaco's fishing boats has dwindled. However, Eric Rinaldi continues to uphold his family's fishing heritage.

It's often just past midnight when Eric Rinaldi unties the mooring lines and carefully manoeuvres his fishing boat Diego out of Monaco's harbour, Port Hercules. Contemplating the hours of inky darkness in front of him, he'll steer past rows of superyachts as he heads out into the open sea, their polished hulls and elaborate designs a stark contrast to the simple practicality of his fibreglass workboat.

Onboard Diego – named for his young son – Rinaldi's biggest luxury is an old Nespresso machine, one of the few comforts among the jumble of nets, hooks, bright orange buoys and other tools of his trade.

What Diego doesn't have, however, is a passerelle, or boarding ladder – a detail I was quick to notice as I approached its berth one warm morning in November. To board, I first had to haul myself from a floating dock onto the handrail of Dédé, Rinaldi's smaller fishing boat moored next to it, before using the handrail on the opposite side as a springboard to make the leap onto Diego. As I did, the gleaming passerelles of the neighbouring yachts came into my line of vision. But as the only two fishing boats in a sea of pleasure yachts, it seemed almost fitting that getting onboard was similarly out of the ordinary.

Fishing vessels haven't always been such a unique sight in Monaco, a principality that has been ruled by the Grimaldi family of Genoese origin since 1297. During the Middle Ages, the threat of invasion from across the Mediterranean kept people away from the sea. By the end of the 18th Century, the threat all but diminished, the coastal waters opened up as a source of income for local fishermen. They would sell their catch along the dock or at the fish market in Place d'Armes, a square at the foot of Le Rocher (Monaco's original settlement and site of the Palais Princier de Monaco) that still exists as a marketplace today. 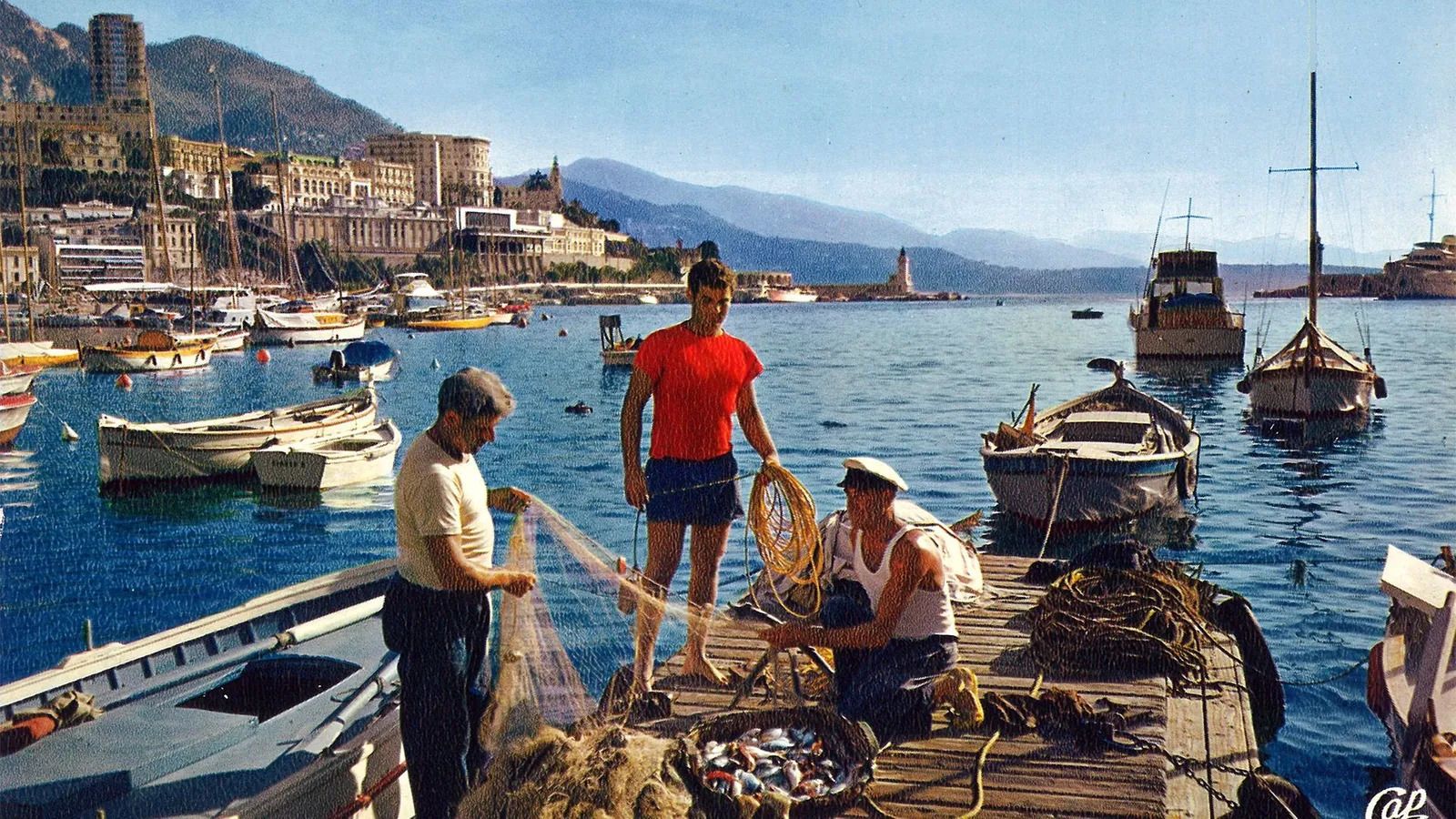 Eric Rinaldi continues to uphold his family's fishing heritage
By the turn of the 20th Century, there were more than a dozen fishing families in Monaco, Rinaldi told me. Even as recently as the 1960's, pointus, the brightly painted traditional wooden fishing vessels that are typically found along the French Riviera and in Provence, shared the harbour with early-style pleasure yachts. Yet, the decade would prove a turning point for several reasons, said Jean-Yves Giraudon, a member of the editorial committee of Annales monegasques, the Historical Review of Monaco. "Boat-building techniques changed and the profession of marine carpentry all but disappeared with the advent of fibreglass. At the same time, Monaco's economic development saw increasingly larger yachts coming into its port," Giraudon explained.

Today, it's a profession at risk of disappearing completely; around these parts, Rinaldi is known as "the last fisherman of Monaco".

"The next generation wanted to do other things," Rinaldi said. We sat talking in the wheelhouse of Diego, his plan to take the boat out that morning scuppered by an engine problem. As I looked at the exclusive Yacht Club de Monaco behind us, its ground floor "Wine Palace" stacked high with top vintages of Bordeaux and Burgundy to sip at sea, I found it easy to assume many have been lured by new, less manual ways of earning a living.

The construction of the ornate Casino de Monte-Carlo, completed in 1863 on an arid plateau where citrus trees had previously grown, changed the course of Monaco's history, turning the Grimaldi's small principality into a resort town for royalty and nobility. The 2sq-km area is now synonymous with wealth: as many as one-third of Monaco's 39,150 residents are reported to be millionaires. 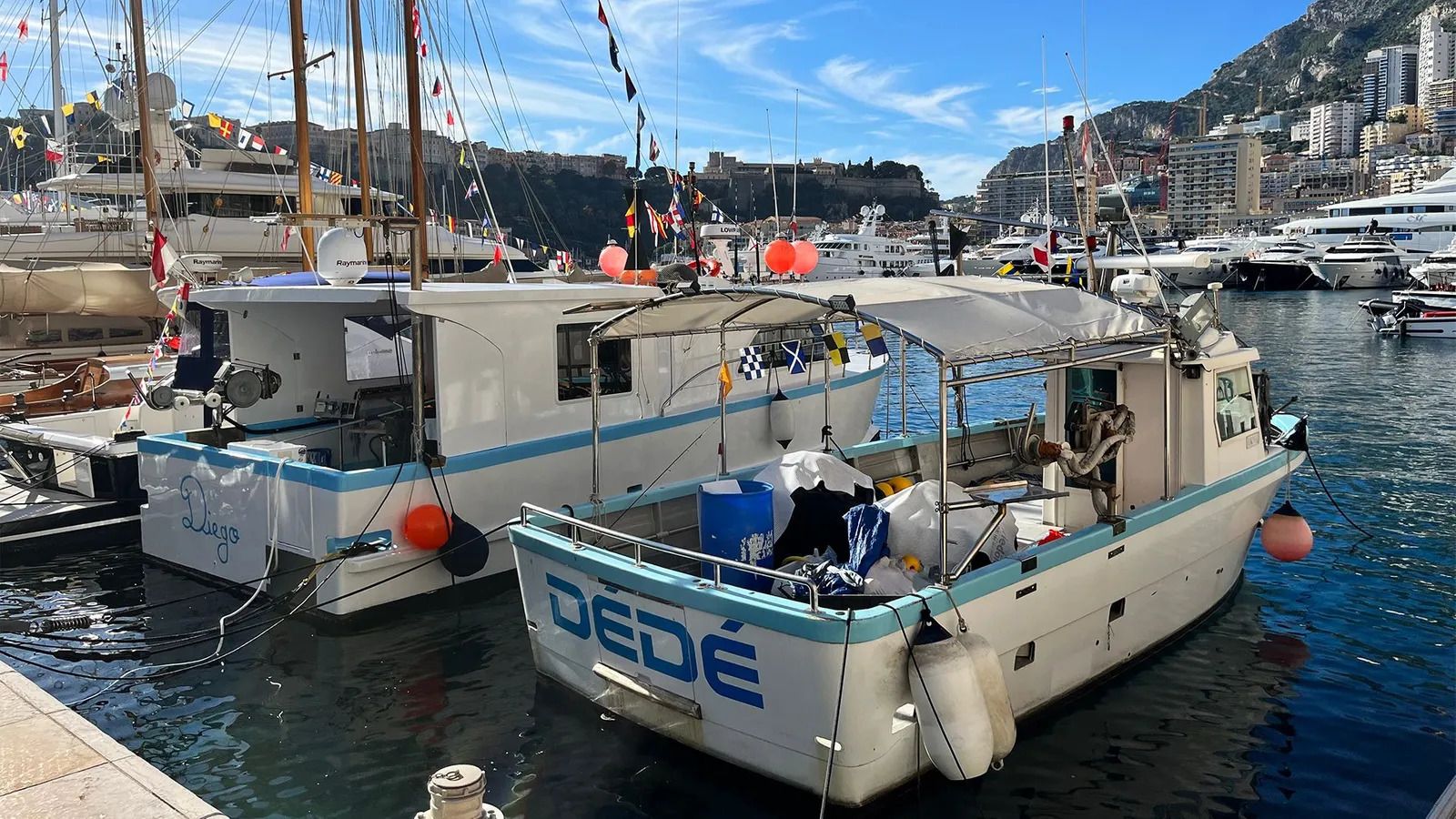 Living among them are 9,611 (as of December 2021) Monégasque citizens, including old local families like the Rinaldi's. Under Monaco's constitution, these citizens are guaranteed advantages such as subsidised housing, but their traditions are maintained through associations such as Comité National des Traditions Monégasques (National Committee for Monégasque Traditions), established in 1924 to protect, among other things, the Monégasque dialect. Then there are the passionate individuals who uphold their proud heritage: such as Rinaldi, the fourth generation of his family to be lured by the sea.

It was Rinaldi's great-grandfather, Adolphe, who first fished these waters around 1900. After him came Ange, Rinaldi's grandfather. Generation three, Andre – or Dédé, as he was known around the port (and for whom Rinaldi's first boat is named) – followed. And for Rinaldi, there was little question where his future lay.

Eric was always drawn towards his father, the port and the boat

"As a baby, he was already thinking about fishing, almost before he could even talk," Rinaldi's mother, Jacqueline, told me. During her pregnancy, she said that she avoided passing anywhere near the harbour. "I didn't want him to have the desire," she recalled, knowing from her husband how all-consuming a passion fishing could be. Her efforts quickly proved futile. "Even in a pram, Eric was always drawn towards his father, the port and the boat," she said. 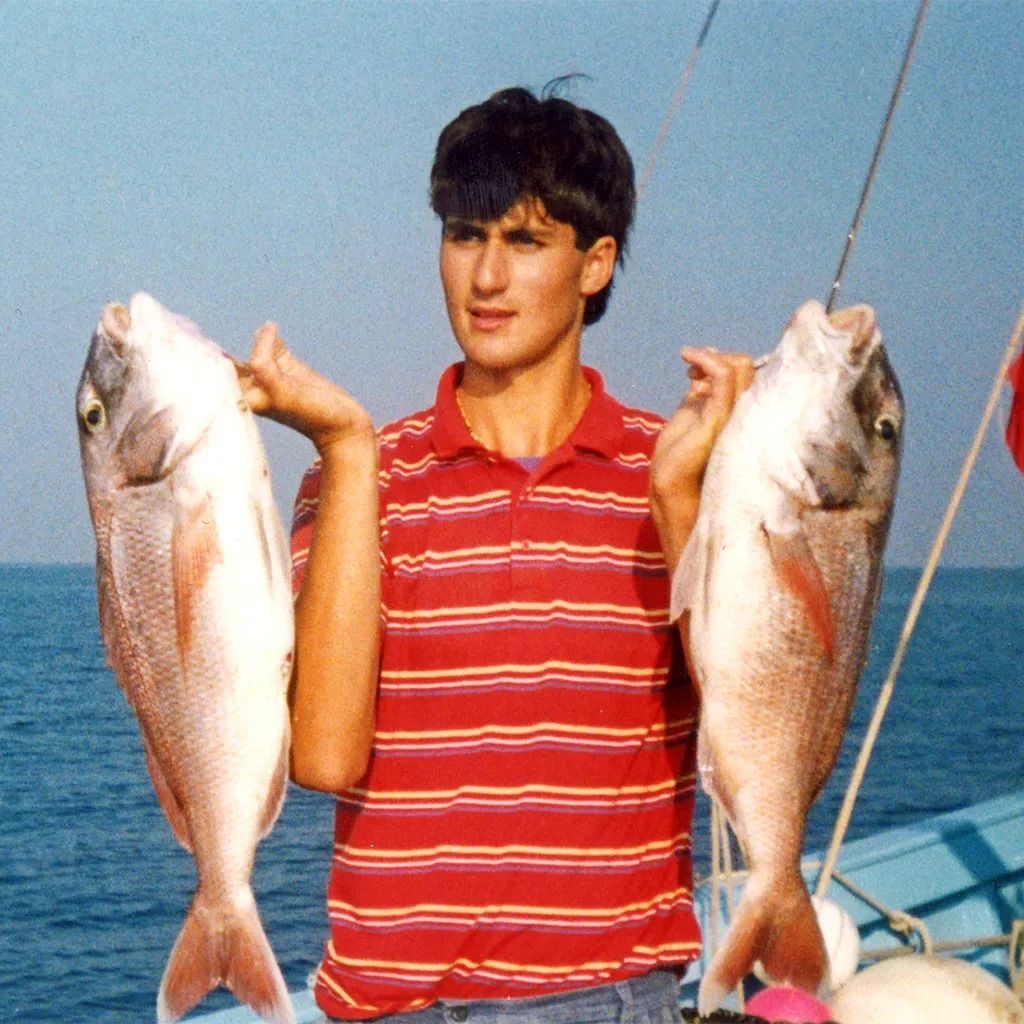 Around the age of five, as soon as he could swim, Rinaldi began to fish with a rod on the docks with Dédé keeping a watchful eye on his son from his boat. By the start of his mid-teens, he was alternating between a week at school and a week spent fishing with his father, biding his time before he could officially quit school and join his father to fish full-time at the age of 16.

Dédé, who passed away a decade ago, taught his son not only practical fishing skills, but also how to read the Mediterranean Sea, a body of water where conditions can change in as little as half an hour. He also remained loyal to the traditional pointu, never fishing on a modern-style fishing vessel. The biggest pointu he fished on was 14m long. Rinaldi transitioned to a modern-style fibreglass vessel when he purchased Dédé after his father's death just over a decade ago. He took ownership of Diego, a slightly larger fishing boat, less than two years ago.

Today, with his uncle Charles to assist him, Rinaldi ventures up to four hours off the coast of Monaco in search of bigger fish such as tuna and swordfish. Closer to shore, when the water warms up in spring and summer, he nets smaller species such as red mullet, sea bream and scorpion fish. He can spend up to 24 hours at sea, preferring to only sleep on his return.

It's not unknown for him to come back empty-handed. "Ten fish keeps me going," he said. Earlier this year, he had a record haul, including a tuna weighing 180kg, quickly snapped up by a chef at one of Monaco's upscale restaurants. 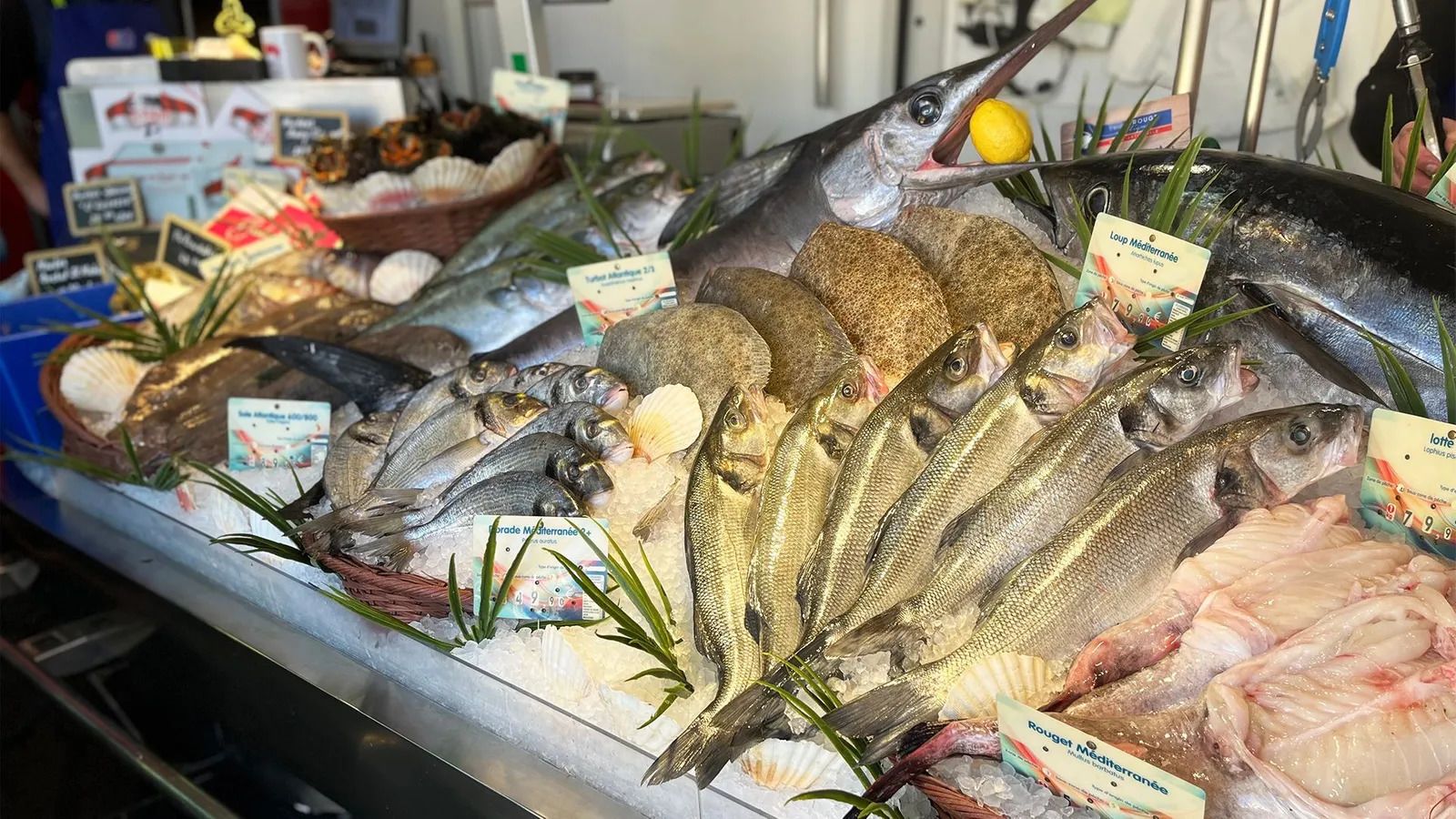 His catch is sold or served fresh alongside other fish at Pêcherie U Luvassu (the Monégasque name for Mediterranean seabass), the fishmonger behind his berth that he co-owns. Local restaurants, as well as residents, are clients – "even the chefs from the superyachts," Rinaldi said. The site has evolved with the arrival of local restaurateur Sami Ben Slama as his business partner in 2020. Now, the smartly dressed waterfront tables are a place to linger for a suited lunch crowd. But it's the success of the restaurant that allows Rinaldi to continue his profession – and his passion – Ben Slama told me.

It's still too early to know if Rinaldi really is truly the last fisherman of Monaco; his son Diego is just 12 and Rinaldi said he is too young to have decided on his future path. Whatever that may be, however, he is sure there will always be a place for a fisherman in Monaco. "And if my son doesn't want to follow me and there's some other young person who wants to, then why not help them?"