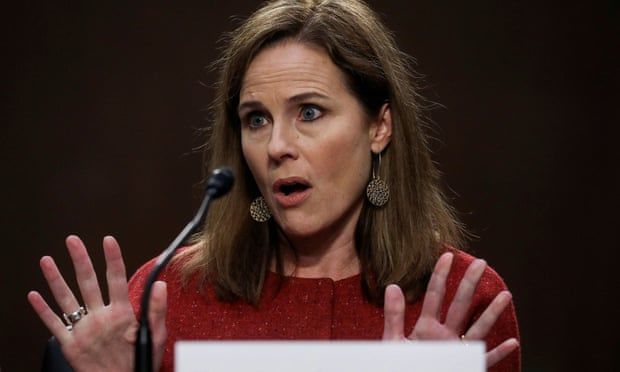 Ask not what your country can do for you, ask how many kids you can have for your country

Looks like those “hysterical” women were right after all. For the past few years anyone worried that civil rights in America would be gutted by a right-leaning supreme court has been dismissed as a fearmonger. The supreme court was above partisan politics, we were told. Upstanding “carpool dad” Brett Kavanaugh had no interest in reversing Roe v Wade, we were told. The fact that People of Praise, the Christian community where Amy Coney Barrett previously served as a “handmaid” (their term for a female leader) was virulently anti-abortion and would expel members for gay sex wouldn’t affect her decisions on the supreme court, we were told.

We were told, as was always obvious, a pack of lies. On Wednesday, the US supreme court considered the most important abortion case in a generation. Its final ruling, due in June 2022, could overturn Roe v Wade and put an end to the constitutional right to an abortion in the US. If that happens, and it seems an increasing possibility that it will, more than 65 million US women would immediately lose access to an abortion in their home state, thanks to “trigger laws” 20 states have in place. But don’t worry, Justice Barrett has said, forcing women to give birth isn’t barbaric at all: if you don’t want to be a mother you can just put the kid up for adoption! Easy peasy.

The rightwing assault on US reproductive rights isn’t taking place in a void. Countries around the world are escalating attempts to coerce women into having children. A new report, Welcome to Gilead, by a UK-based charity called Population Matters, warns that women’s rights around the world are under attack “because of a pervasive, political push for women to have more children, no matter the cost”. The percentage of countries with pro-natalist policies grew from 10% in 1976 to 28% in 2015, according to UN data cited by the report.

Pro-natalist policies, of course, can be a good thing. No one is arguing with policies that make it easier to have children, such as affordable childcare and parental leave. The problem, as the report notes, is the fact that “a growing number of politicians are embracing a new, de facto coercive strategy to boost birth rates: making it difficult for people to access sexual and reproductive healthcare.” Poland, for example, enacted a near-total abortion ban last October. Now, according to the Associated Press, women’s rights activists are worried the government is trying to track every pregnancy in a national database that could be used to help prosecute women whose pregnancies don’t end in a live birth. The Polish parliament is also hearing a proposal to create a “Family and Demographic Institute” that could restrict divorces in an attempt to increase Poland’s birthrate. The head of the institute would have access to pregnancy data and have the power to approve a divorce. Welcome to Gilead, indeed!

A number of factors are feeding into global pro-natalism policies. There’s good old-fashioned misogyny, of course. But as the Population Matters director, Robin Maynard, has noted: “Coercive pro-natalism is not simply a manifestation of patriarchy or misogyny but can be a product of political and economic forces entirely indifferent to women, for whom they exist simply as productive or non-productive wombs.”

There’s capitalism’s need for cannon fodder, for example: it can be hard to grow your economy if there isn’t a steady supply of cheap labour. And ethnonationalism is also fueling pro-natalism: Hungary’s populist prime minister, Viktor Orbán, has repeatedly invoked the far right’s “great replacement” theory to push “procreation, not immigration”. Orbán has promised that women who have four or more children will never pay income tax again and stated: “We want Hungarian children. Migration for us is surrender.” In Turkey, President Recep Tayyip Erdoğan, who has gutted abortion rights, has said that he believes “a woman is above all else a mother” and condemned attempts to promote birth control as “unpatriotic”.

Once again, what’s happening in the US isn’t happening in a vacuum: it’s part of a global assault on women’s rights. Earlier this year, former US vice-president Mike Pence told a summit on demographics in Budapest that “plummeting birth rates” represent “a crisis that strikes at the very heart of civilization”. “It is our hope and our prayer that in the coming days, a new conservative majority on the supreme court of the United States will take action to restore the sanctity of life at the center of American law,” Pence said. The right has been planning for this moment for a very long time. They are coming for your “non-productive wombs” and they’re not going to stop there.

People are buying prosthetic testicles for their dogs

Celebrities like Kim Kardashian and Jake Gyllenhaal have had Neuticles, a brand of prosthetic animal testicles implanted into their neutered dogs. And they’re not the only ones buying the things: balls are big business, according to Mel Magazine.

Proximity to green space may help with PMS, study finds

A first-of-its-kind study looking at women in Norway and Sweden found that those who lived in neighbourhoods with more green space are less likely to experience PMS symptoms than those living in less green neighbourhoods.

Very gracious of them.

A landmark report by Australia’s sex discrimination commissioner found one in three staffers interviewed had been sexually harassed. Eighty-four per cent of people who experienced sexual harassment did not seek support or advice. The report found power imbalances to be “one of the primary drivers of misconduct”.

A new study by the Inter-Parliamentary Union (IPU) and the African Parliamentary Union (APU) has uncovered “an insidious epidemic of sexism in parliaments in Africa.” Women interviewed reported that the majority of abuse comes from male parliamentarians, often from a rival political party. “When young women and girls read about these stories, some of them may fear getting into spaces of influence,” said the Ugandan MP Winnie Kiiza in an interview with Quartz. “Until we challenge the patriarchal system, then the men will continue stopping women from participating in politics.”

The escalating costs of being single in America

Elizabeth Holmes’s bizarre schedules have been entered into evidence

“I am never a minute late,” she writes in a schedule made public in her ongoing fraud trial. “I show no excitement calm, direct, pointed … ALL ABOUT BUSINESS.”

I’ll be chatting to the Guardian journalist Sirin Kale; Labour MP Nadia Whittome, co-founder of Black in AI; and computer scientist Timnit Gebru, who has just launched an institute to document AI’s harms on marginalized groups.

While many of us drank rather more than normal during lockdown, the Aussies took things to the extreme. Australians have been named the heaviest drinkers in the world after spending more time drunk in 2020 than any other nation. The UK came in fifth place with the US just slightly ahead as the fourth drunkest country in the world.