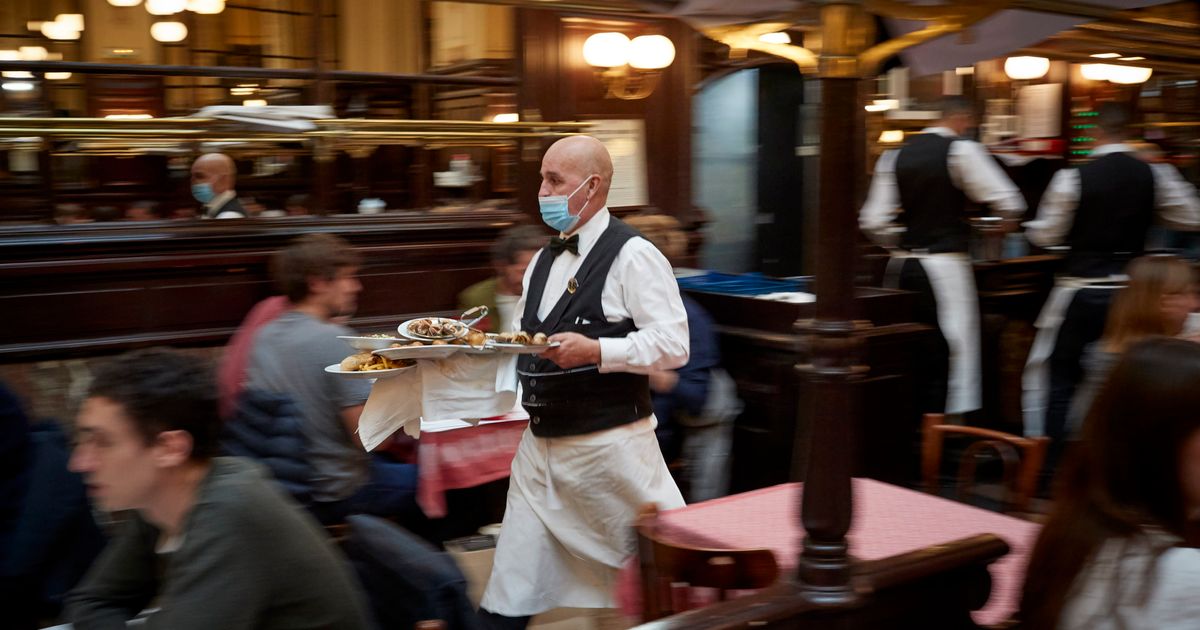 Tourists have returned to France en masse. But there's nobody to pop that bottle of Moët because the waiters have disappeared.

After more than two years of pandemic-driven lockdowns and restrictions that hit the tourism industry hard, the most visited country on the planet is finally seeing visitors return in full force. But far from being a moment of celebration to mark a long-awaited economic reopening, the return to normalcy has been severely hampered by labor shortages across the country.

In 2020, the worst year of the pandemic, tourism fell by 40 percent in France, causing a shortfall of around €60 billion. Hospitality workers found themselves at home for months on end, relying on government aid rather than their regular income and tips, while bars, restaurants and hotels struggled to stay afloat. This year, France is expected to hit pre-pandemic levels of tourism, when it saw 80 million to 90 million foreign visitors annually. But the hospitality sector's efforts to roll out the red carpet this summer to those who were finally able to visit have been hurt by labor shortages.

At one point in the spring, there were up to 300,000 jobs advertised for hotels and restaurants across the country, a significant missing chunk for a sector which employed 1.3 million in 2020. In the tourist haven of Paris' Saint-Germain-des-Prés district, elegant restaurants have resorted to closing their doors one or more days a week to tackle the shortfall. Others have turned to upping benefits and providing flexible schedules, but have met limited success so far, raising concerns the shortages could persist into the fall and beyond.

Elodie, a waiter at Néo Café, sounded a worried note ahead of the fall season when many younger workers who take up summer jobs return to school: "This summer we're doing OK. We're the lucky ones. But in September we'll have to see what happens, because that's the month where there are big changes [in staff]."

While hospitality is one of the worst-hit, it isn't the only industry affected by widespread labor shortages. A survey by the Confédération Générale des Petites et Moyennes Entreprises published in July showed that half of small- and medium-sized businesses in France were actively recruiting, but 94 percent of them were not managing to find the “right profile.”

'It's not the same generation'

The manager of bistro La Petite, Julien, says the impact of shortages extends well beyond just wait times for customers: Without “truly competent” people, the quality of service drops. And along with it, revenue. La Petite is in Paris' Latin Quarter on Place de la Contrescarpe, a square clustered with cafés which has cleaned up its act since it featured in the opening vignette in Ernest Hemingway’s A Moveable Feast. Then, it was plagued with drunkards and "the smell of dirty bodies." Now, none of the cafés can afford to be “sad, evilly run,” like the one in the memoir; they must bend over backwards to attract young workers who are increasingly finding better options elsewhere.

Across the square, Kellia, the sole waiter for afternoon service at the Café des Arts, says most of her colleagues are “students who don’t have experience. They work for just three weeks, so we don’t even have time to train them.” Stéphanie, who runs Café Delmas, puts it bluntly: “It’s difficult to find true professionals. They’re lazy, it’s not the same generation." While this may be on the harsh side, many of industry's old guard agree that young people don't see these jobs as a vocation. 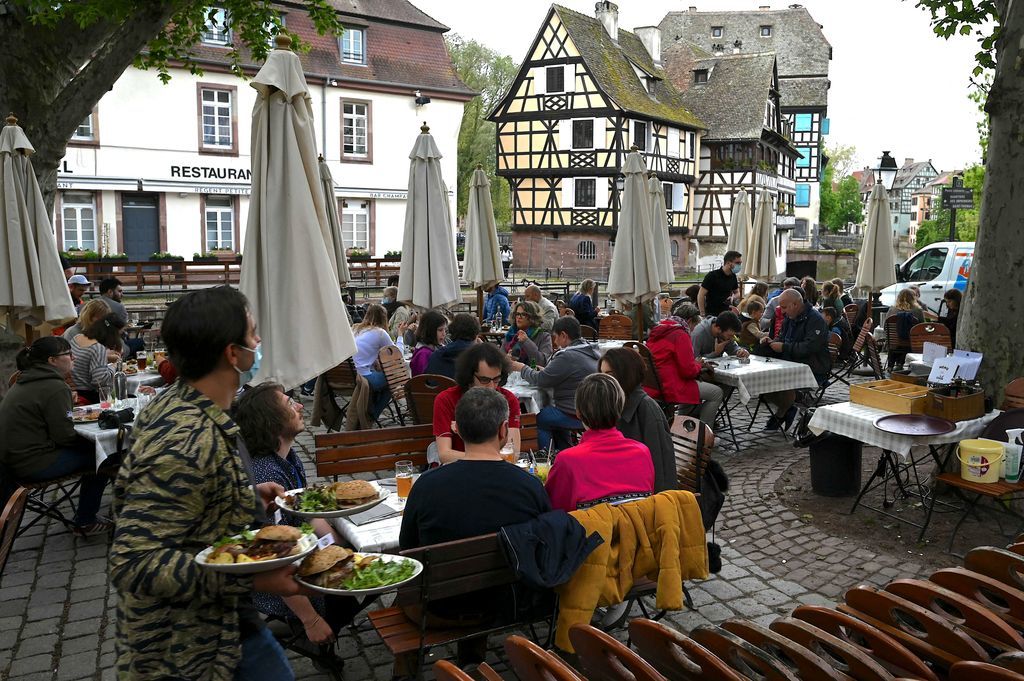 President Emmanuel Macron shares this view, and intends to make it harder to access unemployment benefits while an abundance of jobs remain on offer

"Mentalities have changed," says Jean-Claude, maître d'hôtel at the Brasserie Lipp, which, before the coronavirus, had barely shut since 1880. "Lots of them have gone to university, they want to work like everyone else, work office hours. They want their weekends and bank holidays off, which is practically impossible in this line of work." The brasserie's entire staff is composed of gray-haired men in white aprons and black waistcoats. Their average seniority, according to one count, is 19 years. For Jean-Claude, only a select few workplaces bring a sense of pride these days.

For the government, addressing the shortfall is a major priority, and a key to lowering France’s unemployment rate, which stood at 7.3 percent in the first quarter of 2022. In early July, Finance Minister Bruno Le Maire called the shortage the country’s “second biggest emergency” after spending power and said “nothing is more revolting” than having such high unemployment while so many employers look for staff.

President Emmanuel Macron shares this view, and intends to make it harder to access unemployment benefits while an abundance of jobs remain on offer. In an interview on France's national day, July 14, Macron announced that a draft law enshrining measures to this effect could be presented as early as "this summer," saying that “full employment” was “the heart of the battle [he wants] to fight in the next years.” Full employment is a euphemism; it is in fact an objective of less than 5 percent unemployment, according to the International Labour Organization.

Macron, repeatedly accused of haughtiness and disdain by his opponents, doubled down on a controversial statement he made in 2018, when he implied that finding a job was as simple as “crossing the street.” He said this was “even truer” today, no doubt eyeing up the right-wing Républicains in parliament, with whom he must compromise to pass laws, now that his own party no longer has an absolute majority.

“If [people on benefits are] looking for another career, I can understand it,” said Macron, “If they think the answer is relying on national solidarity while they reflect on things, I struggle to understand it.”

Stéphanie at Café Delmas would no doubt agree.

The headline idea behind the upcoming reform is a welfare system which changes according to economic conditions. In the words of Labor Minister Olivier Dussopt, “Our benefits rules must take into account the jobs market, like Canada does.” Canada’s adaptive benefits system works on a region-to-region basis; Dussopt clarified that highly centralized France would likely not be going down this specific route.

Unions have criticized the plans. Speaking to Paris Match, Denis Gravouil of the CGT, the General Confederation of Labour, condemned the idea of “conditioning unemployment benefits [to make people] accept any old job.” Others pointed to the fact that the last major labor overhaul only took full effect in October, having been put on hold during the pandemic, and the impact of these changes remains unknown.

As head of talent for France at Accor, the largest hospitality company in Europe, Nicolas Saint-Marc spends his life trying to convince people to work in hospitality. For him, “It’s better to incite positively than to restrict.”

“Reforms which incite people to enter the sector because if they didn’t, they’d be in trouble, might be good for us,” he said, “But as an individual, I prefer positive motivation instead.”

Accor has 2,000 jobs listed for France, a figure which has stayed stable since January. They’ve tried countless initiatives to make hotel work more attractive. Recruitment days in Bordeaux, Lyon and Paris, and soon across Europe, offer up hundreds of contracts, with no interviews or CVs required, just participation in “group challenges.” They’ve piloted four-day weeks and even a format where employees design their own rota in collaboration with one another. Despite increased benefits, only a third of the jobs up for offer at the recent recruitment days were filled.

The go-to explanation for the shortage among those in the sector is that these jobs are hard work, often come with gruelling schedules such as split shifts, and with a compensation that doesn't match the skills and effort required. During the pandemic, many in the industry and beyond reflected on their jobs and careers, particularly given how precarious the situation was for hospitality workers at the time. According to Angers University hospitality and tourism researcher Thibaud Szpyrka, workers in the “hellish cycle” of the service sector “finally had time to sit down and ask themselves what they wanted to do.” 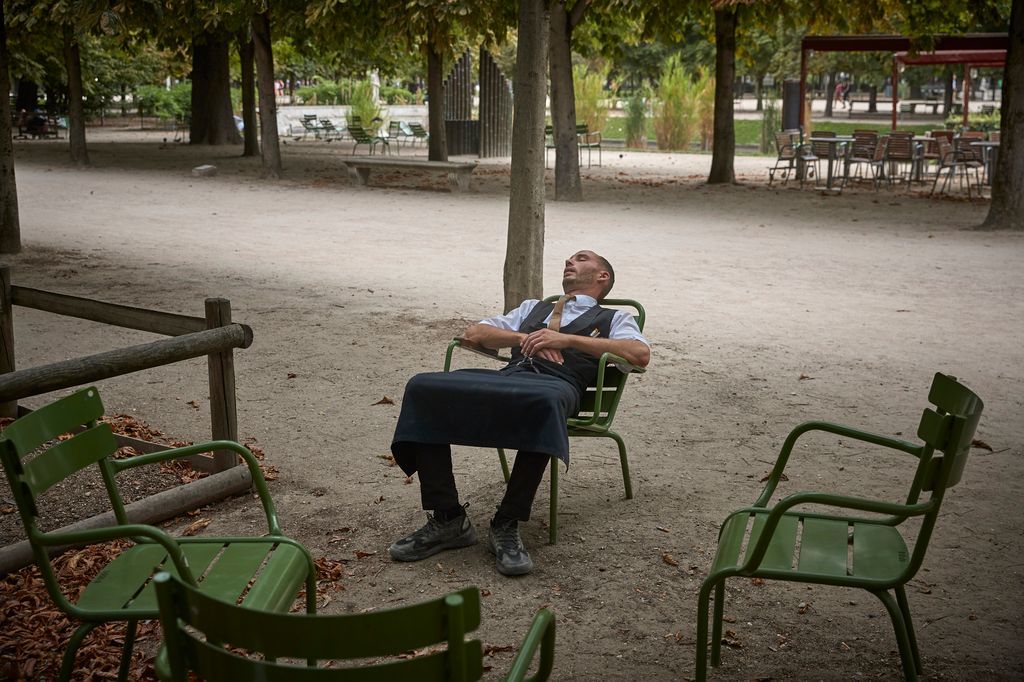 A waiter sleeps in the shade of the Tuileries Garden

Szpyrka, who’s based in Mallorca, doesn’t see the government’s strategy helping. “These measures won’t necessarily bring them into the hospitality sector, or other sectors known for difficult conditions.” More flexible work arrangements, like Spain’s fijo discontinuo, a special contract for seasonal work, was preferable, according to Szpyrka. “Wanting to “CDI-ize” at all costs [meaning make everything an indefinite-duration contract] doesn’t respond to jobseekers’ needs.”

For all the talk of how people’s attitudes and expectations may have changed, particularly during the pandemic, the elephant in the room is money. Poor pay, poor pensions and weak benefits in the sector remain clear drawbacks and with inflation hovering around 6 percent, things are unlikely to get better.

“The government has to put their hands in their pockets and, at the very least, make this an attractive job.”