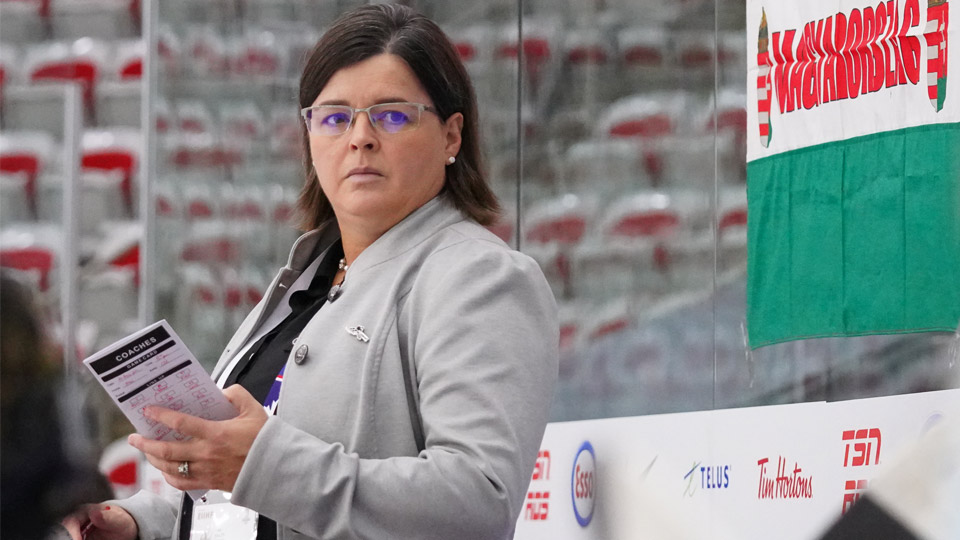 Shaping the game in Hungary

With Hungary making its debut at the 2021 IIHF Women’s World Championship, Lisa Haley jumped at the chance to be a part of the team’s journey as head coach
One hundred and twenty six days. That is how long Lisa Haley has had to quarantine in her journey as the head coach of Hungary’s national women’s team.

Before she was able to be considered an essential worker, the 48-year-old would fly to Budapest for a training camp and then return to Canada for her two-week quarantine during the COVID-19 pandemic.

“Every time I went, it was basically about a 24-day commitment,” Haley says. “I usually have anywhere from one-to-three days out of quarantine jail and then I’m back on a plane.”

The ability to juggle such a demanding schedule would not have been possible without support from her family and Ryerson University, where she is the head coach of the Rams’ women’s hockey team. But despite the taxing travel demands of the head coaching position, the Westville, N.S., native says she has no regrets.

“I think it’s just been a wonderful experience and honestly arriving here in Calgary finally after going through the heartache in April [when the Nova Scotia government cancelled the tournament two weeks before it was due to begin] … it’s been a dream to get here.”

After the 2020-21 U SPORTS season was cancelled due to the pandemic, Haley was approached by Zsuzsanna Kolbenheyer with the Hungarian Ice Hockey Federation to see if she would be interested in spending the year with the national team.

“[After] my first conversation with her, I was convinced I was going to do it,” Haley says. “Knowing the success that Hungary has shown as such a small hockey country… they’re on the right trajectory and I couldn’t resist the opportunity to be a part of that build.”

The 2021 IIHF Women’s World Championship marks Hungary’s debut in the top division of women’s international hockey. The team earned its promotion on home ice at the Division I Group A worlds in 2019.

The pandemic has made it a long two-year wait for the team, but the players are thrilled the time has come for them to hit the ice.

“We can’t wait to play,” says Hungarian captain Fanni Gasparics. “We are really excited as a team. We feel honoured to be here.”

This is the first time in Gasparics’ 19-year playing career that she has a woman as her head coach. She says she didn’t know what to expect, but she has enjoyed Haley’s coaching style and the structure she has helped bring to the team.

“She [taught] us to not to be afraid to play hard around the boards and win the one-on-one battles, because she knows what top-division hockey is like,” she says.

The standard and quality of work Haley learned with Hockey Canada was something she implemented when she began her coaching contract with the Hungarians.

“I really just tried to do a lot of the things that Hockey Canada had taught me in terms of fitness testing and trying to build a sound conditioning program to make the players as strong and fast as they could [be] off the ice,” Haley says.

“It was an opportunity just to teach those high standards and reap the rewards of it. I think our team has improved immensely since we started it.”

Throughout her coaching tenure, Haley says she likes to emphasize support, positivity and clear communication. That style of coaching has really resonated with Gasparics. The open communication has allowed confidence within the players’ games and confidence in player-coach relationships.

“I think my favourite thing is that she trusts me, and she told me that a couple of times one-on-one,” Gasparics says. “She trusts me as a player and she gets to know me, and I know that she appreciates my work as a player. That makes me feel good.”

The last few weeks leading up to the 2021 IIHF Women’s World Championship have been filled with highs and lows for Hungary. Haley says they lost three players within the span of 48 hours: two were unable to get their Hungarian citizenship paperwork in time and Alexandra Huszak, a key player for the team, suffered an injury in the final days of camp.

“It was a bit of a tumultuous camp, but we quickly overcame that and had our eyes focused forward on the group that’s here,” Haley says. “We have a group of 24 players here who are going to do everything they can to give us the most success.”

Coming into its first women’s worlds, the goal for Team Hungary is to make it past the preliminary round to play in elimination games. Nevertheless, looking back at her journey so far with the team, Haley’s favourite moment was being able to walk into the rink with her players for the first time in Calgary.

“They’ve been dreaming of this for two years,” she says. “For two years, the dream has been on hold. It was such an emotional day to step into the rink [with them] for the first time.”

At the end of the day, whether she’s navigating quarantine requirements to fly to Budapest or is back home working with Canadian players, Haley wants to support the women’s game in any way she can.

“The bottom line why I do any of this is to be a part of the growth of the game, whether that’s coaching with Team Hungary or working with the NWHL,” she says. “That’s really my mission, [it’s] to be a part of trying to get women’s hockey the exposure that it deserves and the professional opportunity that it deserves.”
#COVID-19  #Covid
Add Comment