Several NGOs said they would gather to remove the mural on the International Day Against Fascism and Antisemitism, but Serbia's police banned the rally.

Plainclothes police officers were deployed in front of the mural of convicted war criminal Ratko Mladic in central Belgrade on Tuesday, to break up crowds after human rights activists smashed eggs at the large wall painting.

The gathering of the activists from The Youth Initiative for Human Rights was banned by the police, citing possible clashes between right-wing nationalists, who consider the Serb general a hero, and YIHR activists.

Several NGOs announced they would gather to remove the mural on Tuesday, the International Day Against Fascism and Antisemitism, but Serbia's police banned the rally.

Belgrade police said in a statement that officers were not protecting the wall painting but enforcing the ban on gatherings.

The UN court in The Hague sentenced Mladic to life in prison for genocide in the Bosnian enclave of Srebrenica in 1995, when some 8,000 Bosniaks, mostly Muslims, were killed by his troops.

Serbian officials have persistently denied the genocide and the country's nationalist authorities still see Mladic as a freedom fighter.

Interior Minister Aleksandar Vulin described the rights group's plan to hold the gathering as "vile and led by evil intent".

After human rights activists who protested over the mural dispersed, a rightist group said to be members of the so-called "People's Patrol", an extremely anti-migrant organisation, stayed close to the mural, cheering Mladic.

The two opposing groups were separated by the police after some verbal conflicts were reported, but no physical contact occurred. 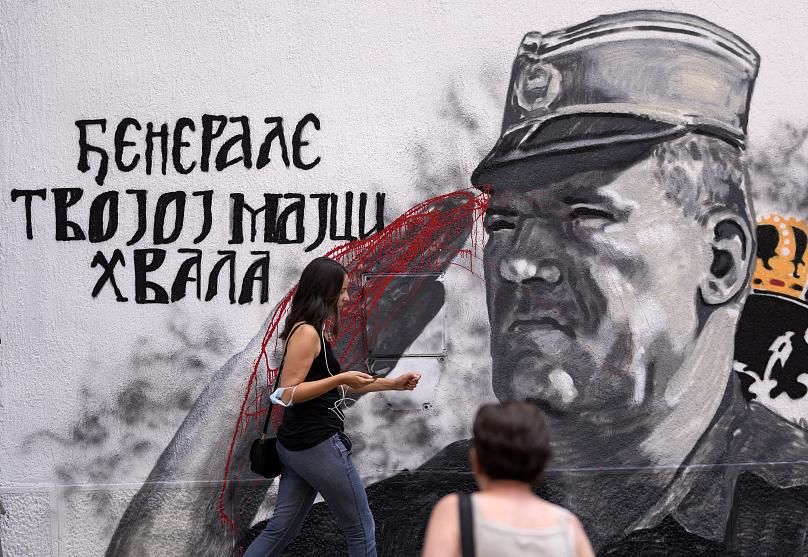 The mural appeared in July on the corner of two streets in downtown Belgrade. His saluting hand was then painted in red, suggesting that it was bloody.

The red paint was then removed, possibly by Mladic supporters. Next to the mural someone wrote: "General, we thank your mother for having you."