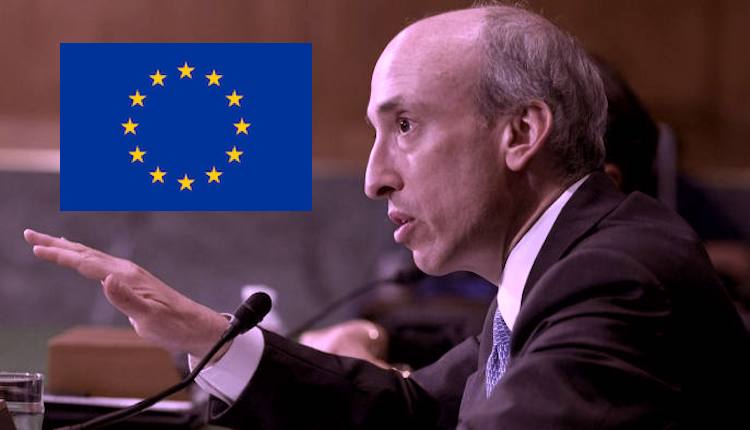 Gary Gensler, the Chairman of the U.S. Securities and Exchange Commission, delivered a speech about Bitcoin before the European Parliament.

Today, Gary Gensler, the Chairman of the U.S. Securities and Exchange Commission, delivered remarks before the European Parliament which equated Bitcoin to the early internet in terms of world-paradigm-shifting technology.

Gensler appeared virtually before the Committee on Economic and Monetary Affairs. He highlighted financial technologies that are breaking down borders and bringing European and American markets together.

“I think the transformation we’re living through right now could be every bit as big as the internet in the 1990s.”

The SEC chairman also highlighted the fact that Bitcoin is borderless and its markets do not shut down: “It operates 24 hours a day, 7 days a week.”

Gensler’s speech before the parliament was a notable attempt to connect the U.S. Bitcoin and fiat regulatory interests both to the larger global financial markets.

“Our global markets are inextricably linked, with money flowing between them in microseconds. New financial technologies continue to change the face of finance for investors and businesses. I know that topic interests this Committee,” he said.

Speaking of the advent of Bitcoin and cryptocurrency, Gensler commented, “This innovation has been and could continue to be a catalyst for change in the fields of finance and money.”

“Yes, there are technologies that can help the platforms on anti-money laundering and ensuring investor protections. But I also think it’s a combination of the hard and software on the platforms, the software particularly, and that which you do in your legislative body and what we do as regulators.”

Many of Gensler’s remarks mirrored statements he has previously made, including, “I’d like to note that financial innovations throughout history don’t long thrive outside of public policy frameworks.”

What is interesting about this statement is that Bitcoin itself is agnostic to public policy. Short of clamping down on popular on-ramps and off-ramps, there is nothing the government can do to stop it, and Gensler knows that, as he has taught courses at MIT about it, Bitcoin Magazine wrote.

In his speech Gensler mainly emphasized the risk that unregulated crypto exchanges pose to the public, as well as the common use of stablecoins as a way of side-stepping public policy goals. Neither of these remarks seemed aimed at Bitcoin.

Referencing the proliferation of unregulated, unbrokered crypto scam exchange sites, he commented, “this asset class has been rife with fraud, scams, and abuse in certain applications.”

The chairman’s speech to the European Parliament comes just one month after he delivered a speech at the Aspen Security Forum in which he issued new comments that drew a dividing line between Bitcoin and its wide field of imitators.

Elsewhere, Gensler issued new remarks that shed light on how the SEC may act on the many exchange-traded fund (ETF) proposals now up for review by the agency, signaling that those based on Bitcoin futures may have the highest chance of approval, which incited the filing of many Bitcoin Futures ETFs throughout August.

Green finance and new Environmental, Social, and Governance (ESG) disclosures were also a high priority for the committee, as they have been for the SEC and U.S. legislators. Climate change and government pressures have caused financiers around the world to add sustainability concerns to risk calculations when picking investments.

Oh ya 14 days ago
Crypto made by the push of a button, has no backing other than finding a bigger sucker to give you more than you paid for it, has no assets and produces nothing. Ya jump right on that LOL
View all comments (1)Add comment