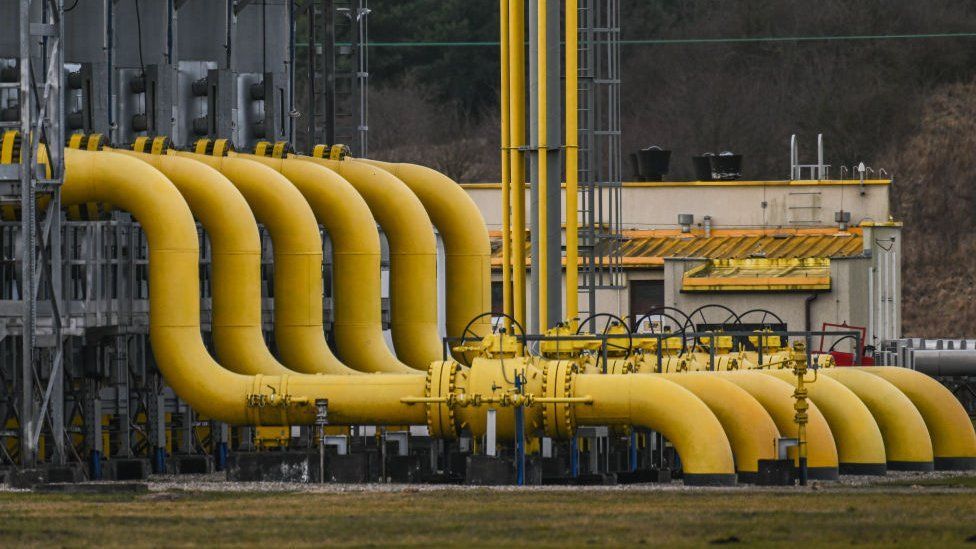 Russian energy firm Gazprom has told Poland and Bulgaria it will stop sending gas to the two countries from Wednesday.

Polish state gas company PGNiG said it had been told all gas deliveries would be halted from 08:00 CET (06:00 GMT).

The Bulgarian Energy Ministry also said it had been informed deliveries would be suspended from Wednesday.

It comes after Russia said "unfriendly" countries must start paying for gas in roubles or it would cut supplies.

Both countries have refused to pay in this way.

PGNiG relies on Gazprom for the majority of its gas imports and bought 53% of its imports from the Russian company in the first quarter of this year.

It described the suspension as a breach of contract, adding that the company would take steps to reinstate the flow of gas.

Bulgaria, which relies on Gazprom for more than 90% of its gas supply, said it had taken steps to find alternative sources but no restrictions on gas consumption were currently required.

The country's energy ministry said Bulgaria had fulfilled its obligations under the current contract with Gazprom and made all required payments.

It added that the new payment system proposed by Russia was in breach of the existing contract.

Climate Minister Anna Moskwa said there was no need to draw gas from reserves and gas to customers would not be cut.

Poland's Deputy Foreign Minister, Marcin Przydacz, said his country had been preparing for the possibility Russia might limit gas exports by diversifying its supplies.

"I'm pretty sure that we will manage to handle this," he told the BBC.

He added that the suspension proved Moscow was "not a reliable partner in any kind of business" and urged other European nations like Germany to support a ban on Russian energy imports.

Poland was already planning to stop importing Russian gas by the end of the year, when its long-term supply contract with Gazprom expires.

PGNiG said its underground gas storage was almost 80% full and, with summer approaching, demand was lower.

On 1 May, a new gas pipeline connection with Lithuania is also due to open that will give Poland access to gas from Lithuania's LNG terminal.

And a new pipeline delivering gas from Norway, known as the "Baltic Pipe", comes online in October. It should reach full capacity by the end of the year and could replace all Russian deliveries.

The gas supply cut does not mean Poland will immediately be unable to meet customer demand.

In recent years, Poland has reduced its dependence on Russian gas and it now buys LNG from Qatar and pipelines connect the country to the European market. Plus, the winter heating season is over, so demand is lower.

But Gazprom supplies more than half of all Poland's gas imports. That's a big hole to fill.

And Poland is not the only EU country now seeking to stop buying Russian energy.

There's a lot of competition on an already tight gas supply market. When the heating season starts again in the autumn and demand rises, Poland could face a tricky few months securing enough supply.

And if it does so, it may have to restrict supplies to large industrial users.

Supplies from Russia account for about 40% of the EU's natural gas imports.

However, many countries have pledged to move away from Russian energy in response to its invasion of Ukraine.

The US has declared a complete ban on Russian oil, gas and coal imports.

Meanwhile, the UK is to phase out Russian oil by the end of the year, with gas to follow as soon as possible, and the EU is reducing gas imports by two-thirds.