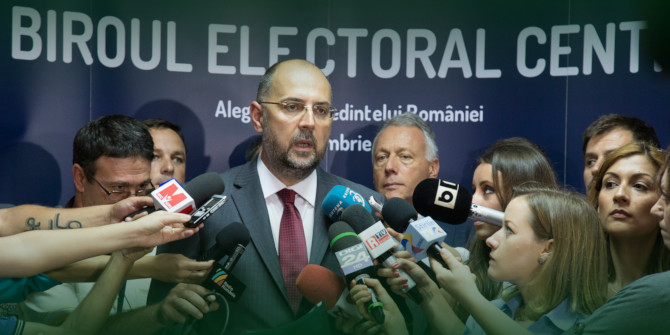 Romania’s ‘Hungarian problem’: A minority caught between integration and self-segregation

Romania is home to a large Hungarian population and the country’s legal system provides a number of rights in relation to the use of the Hungarian language in public life. Yet as Beáta Huszka argues, the way these rights have been implemented is frequently problematic and can foster a form of self-segregation among members of the Hungarian minority.

Romania, like many countries in Central and Eastern Europe, has a significant minority population. The largest minority group consists of ethnic Hungarians, who represent over 6% of the country’s total population. The rights afforded to this group have been championed by the Democratic Alliance of Hungarians in Romania (known in Hungarian as Romániai Magyar Demokrata Szövetség or RMDSZ).

Most of the academic literature on minority rights in Central and Eastern Europe emphasises the ‘duality’ of the present situation. On the one hand, it is generally recognised that the European integration process leading up to the EU’s ‘big bang’ enlargements in 2004 and 2007 led to the adoption of formal norms and the creation of institutions that benefit minority protection in the region.

However, it has also been widely recognised that EU accession was followed by a lack of implementation and backsliding in several of the new member states. As Gwendolyn Sasse explains, ‘deeper political or societal trends’ persisted following accession, perpetuating historically ingrained patterns of discrimination. This discrepancy between laws and implementation has marked the minority protection regime in Romania.

Considering the RMDSZ became part of Romania’s governing coalition in December 2020 – and is likely to be part of the next coalition, which has yet to be formed – it might seem odd to complain about minority rights in Romania. Indeed, under the pressure of EU conditionality, substantial legal progress was achieved during Romania’s integration into the EU, particularly in relation to minority language use and the provision of education in minority languages.

Yet it is clear, especially in hindsight, that despite the RMDSZ participating in several governments since 1996, some rights, especially some of those related to language use and education, remain unenforced, mainly due to the resistance of national authorities. This is important because the failure to allow bilingualism in interethnic spaces is the single most important barrier to the better integration of minority Hungarians into the Romanian state.

Between integration and self-segregation

Pre-existing legal provisions provide for the public use of Hungarian as a second language alongside Romanian in areas where Hungarians constitute at least 20 per cent of the local population. This is significant given that according to the 2011 census results, close to 80% of Hungarians living in Romania (i.e. around one million people) were residing in localities where the use of Hungarian is granted by law.

However, implementation has been largely confined to areas where Hungarians constitute a local majority. Elsewhere, these rights have been sporadically enforced, especially in written communication with the authorities and in places where the share of Hungarians remains below 50%. This means that minority language rights can mostly be enjoyed in monoethnic spaces.

There are many administrative hurdles that obstruct the implementation of minority rights. These include absent bylaws, the failure of local representatives of the central state to follow up on the enforcement of minority language provisions, and the fact that any extra costs associated with implementation must be borne by the local governments themselves. All of these factors reduce the presence of the Hungarian language in public.

As a result, minority Hungarians frequently withdraw into their ‘Hungarian world’, even if many of them also move from this parallel Hungarian society into and out of Romanian social spaces on a daily basis. Their Hungarian world is a network of institutions like Hungarian majority local governments and Hungarian-only schools, as well as churches, media organisations and cultural institutions where Hungarians can interact with each other in Hungarian.

While these deficiencies have fostered self-segregation, some civil society organisations have lately been pursuing legal mobilisation for the creation of bilingual local public spheres, which has proved to be an uphill battle. Enforcing bilingualism in eligible localities is a difficult proposition as it would require a conscious policy of recruiting more minority individuals into public institutions while giving preference to those who are fluent in the minority language. This would result in a greater degree of political and economic power-sharing at the local level, which has been anathema to ethnic majority parties.

The legal struggles of Hungarian NGOs give a glimpse into the difficulties associated with the fight for such bilingual spaces. After years of litigation initiated by the NGO Musai-Muszáj, the city of Cluj in Western Romania finally installed some city name signs that display the city’s Hungarian name, with the Latin and German versions also included as a compromise. However, the Mayor of the city made it clear that he was only willing to put the names of the Mayor’s office and the local council on the town hall building in Hungarian if a court obliged him to do so.

Another Hungarian NGO, CEMO, has fought legal battles for bilingual street name signs in Târgu Mureș and other towns, with no success. The town of Târgu Mureș, where Hungarians constitute close to half of the local population, was the location of the violent ‘Black March’ protests in 1990, when interethnic clashes between Romanians and Hungarians led to a number of injuries and deaths. Since then, there has been interethnic rivalry for symbolic spaces, resulting in a significant loss of rights for Hungarians.

A notable example is the University of Medicine and Pharmacy (today called the Petru Maior University of Târgu Mureș), where the university’s leadership successfully prevented the creation of an autonomous study section in Hungarian, which in principle is a right granted by the law on education. This was achieved by invoking the university’s institutional autonomy, which was confirmed by the courts. As departments with Hungarian-language instruction lack any institutional autonomy, the university’s leadership has gradually reduced the scope of Hungarian teaching since 2012. Such examples reflect how asymmetrical power relations tilt the playing field, putting Hungarians in the position of underdogs as citizens cannot count on the authorities to respect their rights.

Many Romanians tend to blame the Hungarian minority for a lack of integration and cosying up too much to the government of Viktor Orbán in Budapest. However, when the authorities and the courts fail to assist in attempts to create bilingual public spheres, it is little wonder that minority Hungarians choose to withdraw into their monoethnic spaces, dream about autonomy, and seek recognition and support from the Hungarian government.

Since 2010, Hungary’s illiberal government has strengthened its ties with the Hungarian minority in Romania through a significant expansion of financial support and by endowing ethnic Hungarians with Hungarian citizenship and voting rights. Hungarian state funding for this purpose increased tenfold between 2010 and 2020. This funding has played an important role in sustaining the social and institutional network of the Hungarian community. Members of the Hungarian government have celebrated the successful creation of a ‘unified cultural and economic ethnic Hungarian space in the Carpathian basin’ – a national unification of Hungarians that surpasses state borders.

This kind of rhetoric and the policy behind it is enough to send shivers down the spines of many in Romania and foster the impression that the Hungarian minority constitutes a threat to the integrity of the Romanian state and nation. In 2015, the National Strategy on Public Policy and Public Security explicitly mentioned the aspiration for territorial autonomy of Hungarians as an internal threat, causing an outcry from the RMDSZ. The reference was subsequently removed, however more recent statements by some Romanian politicians indicate the perception of a threat remains widespread. An example is a statement by President Klaus Iohannis last year accusing the largest opposition party, the PSD, of “selling Transylvania to the Hungarians”.

Yet without a shift in approach, the Romanian state will be unable to win the loyalty it seeks from the 1.2 million of its citizens who are members of the Hungarian minority. This is all the more necessary considering, as the Romanian historian Lucian Boia explains, the fear that Hungarians are somehow capable of ‘taking away’ Transylvania is entirely groundless. Boia writes that Hungarians have already lost the struggle for Transylvania, as their declining population brutally shows.

Thus, Romanians should feel at ease with making gestures that have the potential to reduce the sense of alienation many Hungarians feel toward the Romanian state. A good start would be to respect the laws of Romania and enforce bilingualism in eligible localities – something that, for now, remains a pipe dream.