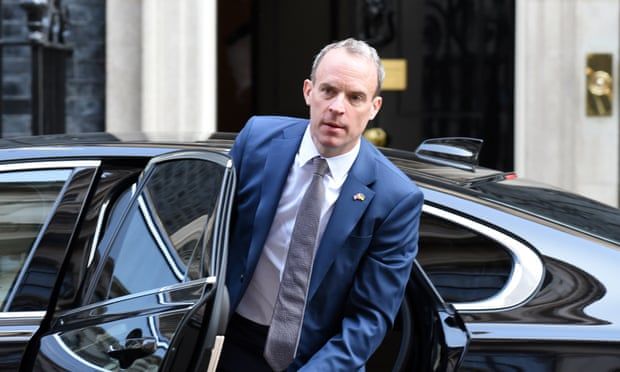 Deputy PM says proposals to replace the Human Rights Act will enable principle of free speech to be a legal ‘trump card’
Dominic Raab has disclosed proposals to replace Labour’s Human Rights Act with a British bill of rights which he believes will enable the principle of free speech to become a legal “trump card”.

Raab, the deputy prime minister and justice secretary, has argued that the plan will better protect the press in exposing wrongdoing and said he feared free speech was being “whittled away” by “wokery and political correctness”.

Raab told the Daily Mail that under plans being drawn up for the bill of rights, there would be only limited restrictions placed on the protections on free speech with checks to stop people abusing it to promote terrorism.

He said it would be given a “different status in the pecking order of rights” with the main ramifications expected to be on legal disputes.

Raab told the Daily Mail: “We will still be clamping down on those who try and use either media or free speech to incite violence, to radicalise terrorists, or to threaten children. All of those safeguards will be in place.

“But we’ve got to be able to strengthen free speech, the liberty that guards all of our other freedoms, and stop it being whittled away surreptitiously, sometimes without us really being conscious of it.

“So it will have a different status in the pecking order of rights and I think that will go a long way to protecting this country’s freedom of speech and our history, which has always very strongly protected freedom of speech.”

The proposals, currently out for consultation, are expected to be included in the Queen’s speech later this year.

The Human Rights Act (HRA) was introduced in 1998 to enable UK nationals to rely on rights contained in the European convention on human rights before the domestic courts.

Raab added: “Effectively, free speech will be given what will amount to ‘trump card’ status in a whole range of areas.

“I feel very strongly that the parameters of free speech and democratic debate are being whittled away, whether by the privacy issue or whether it’s wokery and political correctness.

“I worry about those parameters of free speech being narrowed.”

In December, the government announced a consultation to revise the Human Rights Act.

It cited estimates that as many as 70 percent of successful human rights challenges are brought by foreign national offenders who cite a right to family life when appealing deportation orders.

The government said at the time that the “plans will give the supreme court more ability to interpret human rights law in a UK context”.
#Dominic Raab  #Raab
Add Comment