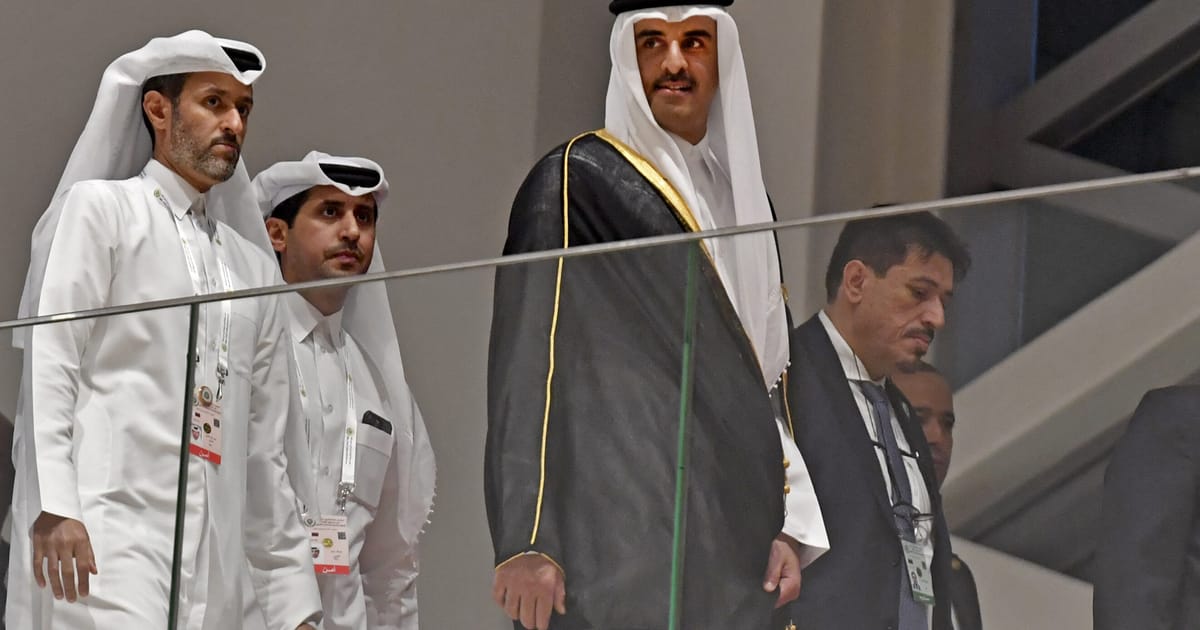 Belgian prosecutors aren’t the only ones investigating whether the Qataris covertly sway policy with gifts and money.
For a small Gulf emirate located on a spit of desert jutting into the Persian Gulf, Qatar has long punched way above its weight in the corridors of Western power.

Natural gas and oil explain its wealth — Qatar has the third-largest proven natural gas reserve — but that only tells half the story of how the world’s richest little emirate, and current World Cup host, has managed over the past decade or so to exert widespread influence and sought to shape policymaking from Washington to Brussels, London to Berlin, using donations to academia and think tanks, investments in media brands and top corporations, and invitations to leading politicians to attend high profile summits on education and climate action.

The graft scandal unfolding now in Brussels, with the arrests of four people including Greek MEP and European Parliament Vice President Eva Kaili, will likely draw much more scrutiny to Qatar’s highly sophisticated and sustained foreign lobbying and interlocking influence campaigns, which are cited by analysts as textbook examples of how to parlay cash into soft power.

Belgian prosecutors aren’t the only ones investigating whether the Qataris buy influence and seek covertly to sway policy with gifts and money.

U.S. federal prosecutors have launched multiple Qatar-linked probes in recent years trying to establish whether pay-to-play lobbyists and former American officials broke lobbying laws and failed to register as “agents of a foreign principal.” Among the influence campaigns investigated was a multimillion-dollar lobbying effort in 2018 involving Qatari officials inviting 250 friends and associates of then-President Donald Trump on all-expenses-paid trips to Doha.

In June, retired General John Allen, a former commander of NATO and U.S. forces in Afghanistan, resigned as president of the Brookings Institution after news broke that he was under investigation by the FBI for lobbying secretly on behalf of Qatar.

The emirate’s ruling al-Thani family has leveraged fabulous natural gas-based wealth into regional and international influence, said Jonathan Schanzer, senior vice president for research at the Foundation for the Defense of Democracies, a Washington-based think tank.

“Qatar has wielded its immense wealth in ways that violate norms, if not laws, all around the world; there’s virtually no Western capital, let alone South American or Asian ones, that has not been impacted in some way,” he said.

Schanzer acknowledges much of what the Qataris do to try to influence Western policy and public opinion is legal, but the scale and extent raises questions, he said.

“They retain many of the white shoe law practices and lobby firms here in Washington. I have always found it remarkable how they sponsor the American Congressional baseball game every year. They have paid to keep the Washington DC Metro open when hockey games run late in Washington and there’s just a huge number of ways they purchase influence legally. The problem I think becomes this: how much is too much? You know, for a country comprising 300,000 native-born citizens it just simply does not seem normal to wield the amount of influence they do globally,” Schanzer added.

It was Sheikh Hamad bin Khalifa Al Thani, the former emir who governed from 1995-2013, who started the process of using Qatar’s vast energy resources and wealth to transform the emirate into a global player when it comes to soft power. He spent more than $1 billion to build Al Udeid Air Base southwest of Doha, now the home of the biggest American military installation in the Gulf.

And during his watch, Qatar made massive investments in Western marque companies and has significant stakes in major British, French and German corporations and financial institutions, including Porsche, France Telecom, Credit Suisse and Royal Dutch Shell. He also started making huge donations to Western schools, universities, think tanks and museums.

Doha’s global engagement through education, culture and art — all useful in securing political influence — has been overseen by Mozah bint Nasser, the glamorous second wife of the former emir and mother of the current ruler, Tamim bin Hamad Al Thani.

Famous for glitzy globetrotting philanthropy which has her rubbing shoulders with Western royals and Hollywood superstars, she heads the Qatar Foundation, which is seen in the emirate as a state-within-the-state — its budget is considerable although opaque and is unpublished. One of the most ambitious of the World Cup stadiums is in QF’s Education City.

Qatar donated $1 billion to U.S. universities between 2011 to 2017, making it “the largest foreign funder by far” of American higher education, according to U.S. watchdog group Project on Government Oversight.

But the Qatar Foundation — as well as the emir — have also been caught up in the deep contradictions of the emirate. Conservative-minded Qatar is an adherent of Wahhabism, the strict Muslim school of thought associated mainly with Saudi Arabia but also the emirate’s official faith. That ends up with the emir trying to pull off an increasingly precarious balancing act between appearing one moment Western-oriented while at the same time avoiding offending the more hidebound members of the 2,000-strong Qatari royal family or risking becoming a target of jihadists.

The Qatar Foundation has been criticized for hosting “hate preachers” in mosques it controls in the emirate like Omar Abdelkafi, Aidh al-Qarni and Saudi cleric Saleh al-Moghamsy, who has argued al-Qaeda founder Osama bin Laden died with honor in the eyes of Allah.
#Donald Trump  #Afghanistan
Add Comment