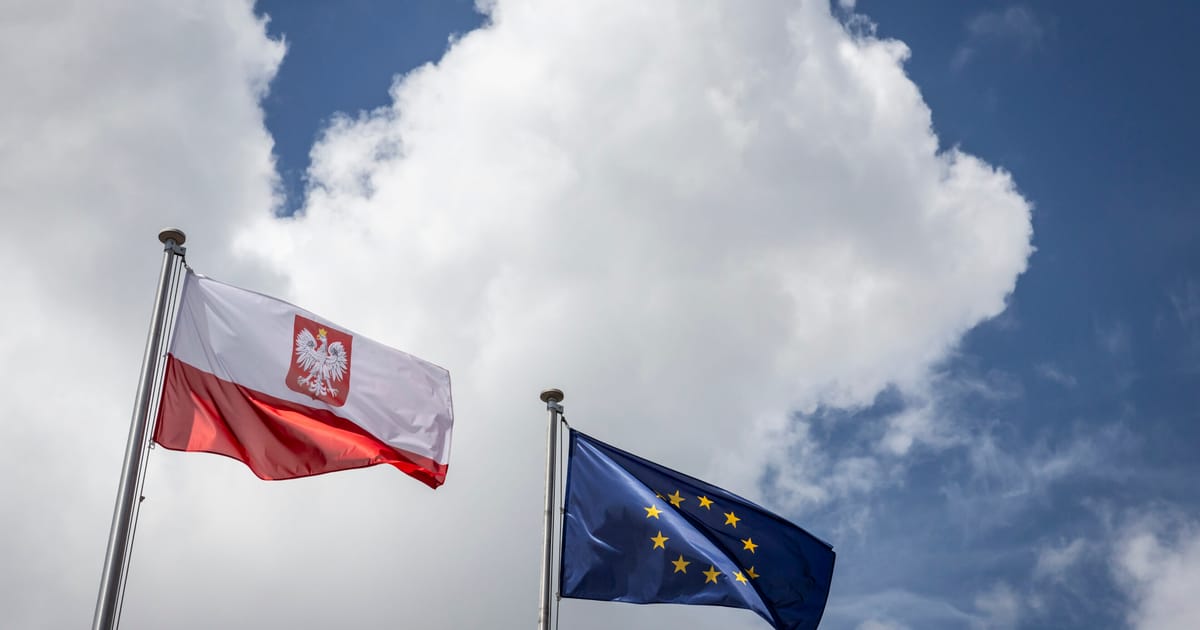 The bill survived one vote in parliament but faces many more tests ahead.

Poland’s parliament on Wednesday approved the first stage of a bill aimed at rolling back some judicial reforms to unblock billions in EU cash — but the government still has a mountain to climb before the legislation is passed into law and that law is accepted by Brussels.

The bill is meant to meet “milestones” agreed with the European Commission to lessen worries the government is violating the EU’s democratic rules. If accepted, it would free up €36 billion in loans and grants from EU pandemic recovery fund — something the ruling Law and Justice (PiS) party desperately wants to boost its chances of winning a third term in office in this fall’s parliamentary election.

An effort by the right-wing Confederation party to kill the bill was overwhelmingly rejected, with 414 parliamentarians voting to keep working on the project while only 35 sought to block it.

But that doesn’t mean it’s smooth sailing for the government.

The bill was rejected by the small Euroskeptic coalition partner of PiS, United Poland, led by Justice Minister Zbigniew Ziobro — the architect of many of the reforms that have soured relations with the EU.

“This [proposed] law is not a compromise but a capitulation, and a prelude to more blackmail by the EU,” United Poland parliamentarian Sebastian Kaleta said during the debate.

Opposition parties did back the bill in the first reading, but said they intend to propose amendments during the rest of the three-day parliamentary session meant to pass the legislation.

“Today, we made a joint decision that we will not support any motion to reject [the bill] in the first reading, and we will work on this bill,” Władysław Kosiniak-Kamysz, leader of the agrarian Polish People’s Party, told a press briefing ahead of the debate.

The opposition made it clear that its support for the proposal in the later stages of parliamentary proceedings will depend on PiS accepting opposition-sponsored changes in the draft text.

“Do not count on us raising our hands in support of any provisions that violate the constitution,” said Michał Gramatyka, a parliamentarian with the liberal Polska 2050 party, during the debate — a point repeated by several other opposition lawmakers.

But the government warns that any tweaks raise the risk of the final bill being rejected by the European Commission.

“We are only a small step away from receiving these funds, and I appeal to the opposition not to try amending the text of the proposal, as that will have the European Commission scrutinize those changes without any guarantee that they will be accepted,” Europe Minister Szymon Szynkowski vel Sęk told parliamentarians.

The bill would move judicial disciplinary matters from a special chamber in the Supreme Court, which is seen as being under the government’s influence, to the Supreme Administrative Court, another top court that is viewed as more independent.

The draft law would also end sanctions against judges who raise questions about the status of fellow judges — a touchy issue in Poland, as many recently appointed judges have dubious legal status thanks to the government’s reforms changing how they are appointed.

Judicial independence and disciplinary measures to punish judges who spoke out against the government’s judicial reforms are at the heart of the rule-of-law dispute between Warsaw and Brussels.

But there are some doubts if the bill, as drafted, actually meets the EU’s demands.

“This bill won’t substantially solve the issue of disciplining judges for political reasons in Poland. I still don’t see the milestones to be fulfilled. Releasing payments to Poland in this situation is not justified,” said Daniel Freund, a German member of the European Parliament with the Greens.

The government had argued that deep reforms were needed to make Polish courts more efficient, accessible and cleansed of communist-era judges. But critics saw the legal changes, which started in late 2015, as an effort to put the courts under tighter political control.

Poland first attempted to backtrack five months ago, but the largely cosmetic reforms did little but change the name of the disciplinary chamber and weren’t enough for the Commission to agree to unblock the desperately needed EU cash.

The legislation faces other hurdles.

If and when it makes it out of the Sejm, the lower chamber of parliament narrowly controlled by the government, it then moves to the opposition-controlled Senate.

There are also doubts about Polish President Andrzej Duda’s willingness to sign any bill into law.

Duda’s camp has repeatedly hinted that it does not like some of the proposed changes, in particular allowing the questioning of judicial nominations, as it sees these as undermining the president’s authority.

The bill was pulled from the legislative calendar in December after Duda expressed his doubts.

“This is a project for which the government takes responsibility. The president is not its author, nor was he involved in negotiations with the European Commission,” presidential adviser Małgorzata Paprocka told the Rzeczpospolita newspaper. “He will make decisions if the legislation is passed by parliament and reaches his desk.”