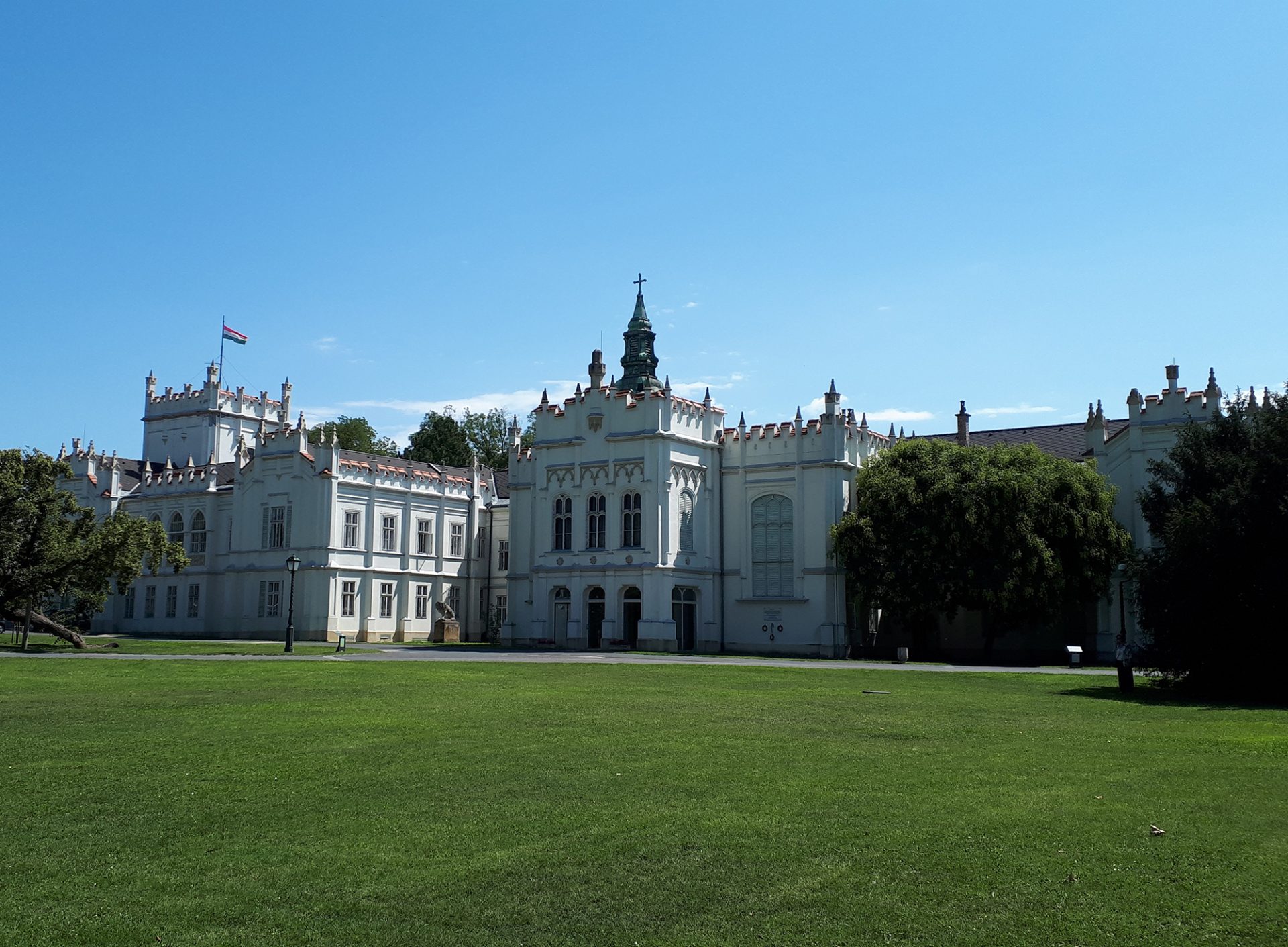 Martonvásár is a quaint locale 30 kilometres south-west from Budapest and is best known for when Beethoven came to town, which he did on several occasions during the early 1800s.

It was a marketplace alongside the main Budapest and Lake Balaton through road when it first came to provenance in 1268. After the Turkish invasion of Hungary, which came to this particular spot in 1543, Martonvásár was largely abandoned. Little is said beyond this juncture until the 1770s, when much of this immediate area went into the ownership of the aristocratic and refined Brunswick family. They began to work and develop all nearby.

It’s clear, Martonvásár’s most distinguished landmark is the exalting whitewashed Brunswick manor house and park. This is a delightful Baroque mansion and estate with a touch of Englishness, built and lived in by four generations of this same family. The home itself was constructed in three different stages, the first by Antal Brunswick in 1784-1785. This was only a ground-floor Baroque château alongside the attached St. Anne Roman Catholic church, which was also built within this same timeframe.

But it was his wife, Anna Seeberg, who brought legendary provenance not only to the estate but to Martonvásár in general. She was a subscriber to Ludwig van Beethoven’s sheet music and frequently travelled to Vienna in 1799 with two of her daughters, Teresa and Josephine, for piano lessons. The family befriended the great master (1770-1827) there and in return welcomed their distinguished German guest to their home on many occasions.

The scholarly Caroline had a daughter, Blanka Teleki, (1806-1862), who became a pioneer for women’s education and established the first academic girl’s school in Hungary.

But the main theme here concerning Beethoven is with Josephine, who was the renowned piano player and tutor’s secret lover, and central figure of his life.

The musical maestro composed many of his works while staying with the family at Martonvásár. Some were dedicated to the Brunswick family, including the “Appassionata” sonata, which was his tribute to the three daughters. 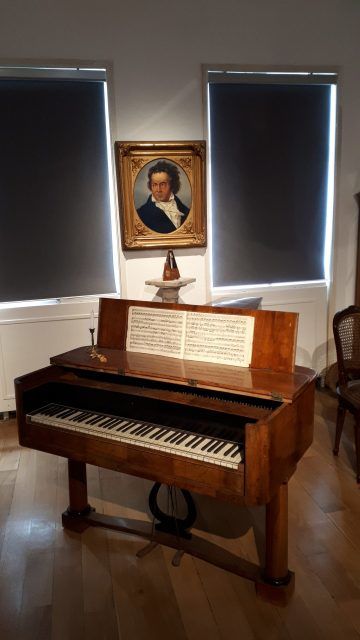 Despite his devotion towards Josephine, Beethoven had good relations with everyone there, in particular with eldest daughter Teresa, being charmed by her literacy and work for the local community. She was also an excellent pianist as well as a local promoter for Beethoven, delivering him new audiences here in Hungary.

But despite the obvious affection Beethoven and Josephine had for one another, her mother finally forced her to marry Joseph Count Deym, on the assumption he was a rich gentleman. Her new life then took her away to Vienna. But Beethoven continued to be a regular guest at their abode in the Austrian capital.

Josephine became a widow with four children and she remarried, surprisingly not to Beethoven but to Estonian Baron Christoph von Stackelberg, in 1810. This occurrence troubled Beethoven most deeply, and the marriage did fall apart in 1815 when her husband walked out. She died soon afterwards at the age of 42.

Probably it was due to their life positions and social status that marriage for Josephine and Beethoven could never be, at least during those times. Even so, their secret liaisons carried on to the end. Undated, cryptic letters from him to her were found shortly after his death in Vienna in 1827.

Meanwhile, the next stage of developing the Martonvásár home took place in the 1820s when Ferenc Brunswick built a second floor, giving a neoclassical style. This lasted until the next-in-line Géza Brunswick took over the manor house and redeveloped it again, in 1875 to its eventual English Neo-Gothic style, as seen today.

But all came to an abrupt end for this noble family in 1893, as bankruptcy loomed. They had to sell up to Archduke József Habsburg, then Brunswick was sold again to Antal Dreher a well-known brewer, who kept it until 1945.

Beyond this point, the Brunswick abode became a military hospital. Even so, by then there was no actual owner. The war years caused some damage to the mansion, until in 1953 the estate was taken over by the Hungarian Academy of Sciences. Finally, the Beethoven Memorial Museum was established in 1958 and the property itself was restored in 1970.

The Beethoven museum hosts an original Ferenc Brunswick piano, made after Beethoven’s time in Vienna in 1829, which was duly played by Hungarian pianist Ferenc Liszt (1811-1886). There are various letters and, remarkably, a lock of Beethoven’s hair, plus more artefacts. A contemporary display features inter-active devices and music to listen to.

The 70 hectares of splendid parkland have well-established trees, with such as cypress, ginko, maple, plane and many more contributing to the sweeping greenery and high theatrical scenery. The Brunswick estate also comes with its own lake and exclusive island, which serves as an open-air stage in this shady shrine every summer. Three times a year one can walk in the great man’s footsteps and attend a show, with Beethoven’s music playing to sell-out audiences as it has done for the past 60-plus years there.

Apart from the museum, the rest of the Brunswick house is now run by the Hungarian Academy of Sciences and is the Centre for Agricultural Research, which is permanently closed to visitors. But the grounds are open all year round to the public and make very pleasant strolling. 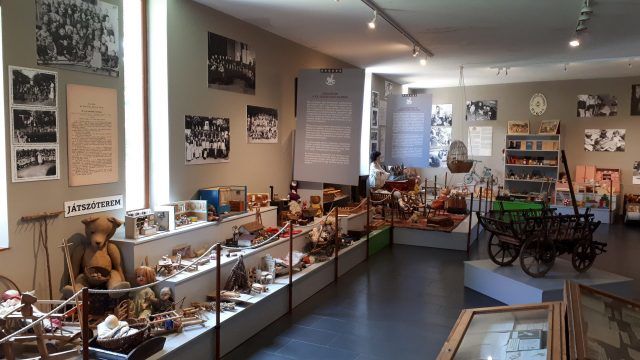 For a preview into what this organisation is about, visit the commendable family-friendly Agroversum Science Adventure Centre in Martonvásár township. This exhibition hall not only delivers on agricultural productivity and economy but highlights the main purpose, to raise awareness of the importance of agricultural sciences, the plight of climate change and so forth, in a light, informative way.

Despite Beethoven taking much of the spotlight in Martonvásár, it’s also of paramount importance that the spirit of Teresa is there too. Directly across the main Dózsa György road from the estate is a delightful playschool museum, set up after her time but in obvious honour to her. This Nursery School Museum (Óvodamúzeum) hosts an impressive series of exhibits commemorating Teresa Brunswick and her first playschool.

Beyond these remarkable features, everyday Martonvásár with its population of 5700 is mainly surrounded by the familiar mid- to late-20th-century cubed housing of the dictator Kádár era, as well as by rich, arable flatlands.

Martonvásár is part of the Budapest commuter belt and was elevated to town status in 2005. This charming locale has a high-tech sports centre and the Horvath Otto sports grounds and football field. There are Saturday market stalls at the central square, which also hosts outdoor entertainment. Locally produced quilts and patchworks are also a characteristic feature there.

To add to the educational side of things, there is “The Mill” art school on the outskirts of town. All rounds off with a yearly lavender festival. It is clear that Martonvásár has preserved its cultural heritage while moving with modern-day times, and is very much worth a visit.

To get there, either take to the M7 motorway or the Number 7 back road. Or trains leave about every half hour from Deli railway station and take 25 minutes. The same applies with the frequent and regular bus services.