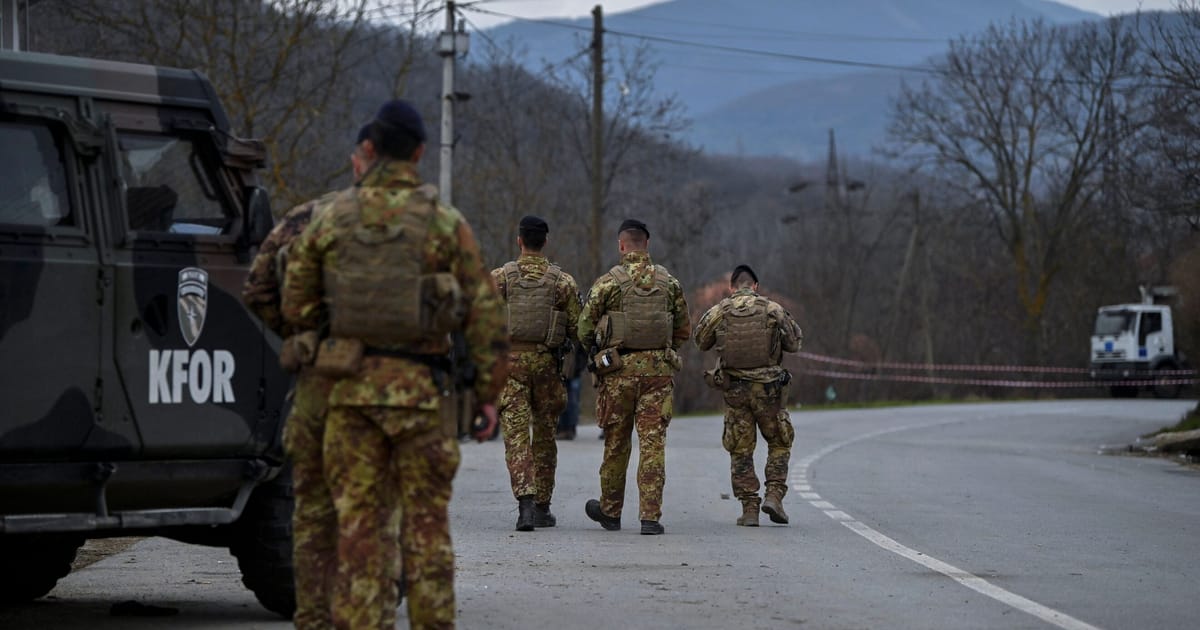 Not over yet: EU wary of further Kosovo-Serbia tensions as it pushes final deal

Negotiators have resolved a current threat of violence, but the EU says Kosovo and Serbia must reach a broader deal in 2023.

Repeated border roadblocks, shootings and attacks on journalists have imperiled months of EU-led negotiations between Kosovo and Serbia.

In the past week, a long-running dispute between the two countries once again reached a tipping point, with new barricades going up and Serbia moving its troops to high readiness after Kosovo deployed police to its northern, Serb-majority areas.

While Serbia announced late Wednesday that the fresh barriers would be taken down within 48 hours, the sources of friction remain — and doubts are growing that an EU-facilitated agreement between the two countries will get finalized before a tentative March 2023 deadline.

“I believe it has solved the problem, but tensions remain high. The level of mistrust is higher than ever before,” Miroslav Lajčák, the EU special representative for the Belgrade-Pristina dialogue and Western Balkans issues, told POLITICO.

“What is really important now is to not allow the situation to backslide into another crisis, and it is important for the leaders of Kosovo and Serbia to start creating an atmosphere conducive to productive discussions on normalization of relations,” added Lajčák, who is working with the U.S. and NATO on the diplomatic efforts.

Lajčák insisted these efforts will not cease, saying the March deadline is meant to relay the seriousness of reaching a deal. The international community is feeling an increased urgency to resolve the issue given how Russia’s war is raging nearby and that the Kremlin has long sought to lure the Balkans away from the EU.

For now, however, an agreement appears far off.

“At the moment, it is difficult to imagine a positive outcome of the negotiations between Belgrade and Pristina,” said Maja Bjeloš, a policy analyst at the Belgrade Center for Security Policy.

“Crises in Kosovo and violent responses to the political deadlock seem to have become normalized,” she added.

The latest flare-up began in early December when Kosovo sent police to the Serb-majority north following an announcement that elections would be held in the region to replace the Kosovo Serb officials, who resigned en masse in November.

In response, the Kosovo Serb community — which largely pledges loyalty to Belgrade — set up around 14 separate barricades and roadblocks.

While formally a part of independent Kosovo, these northern regions have not completely integrated into the country, and Serbia still manages basic services there, such as healthcare and education. 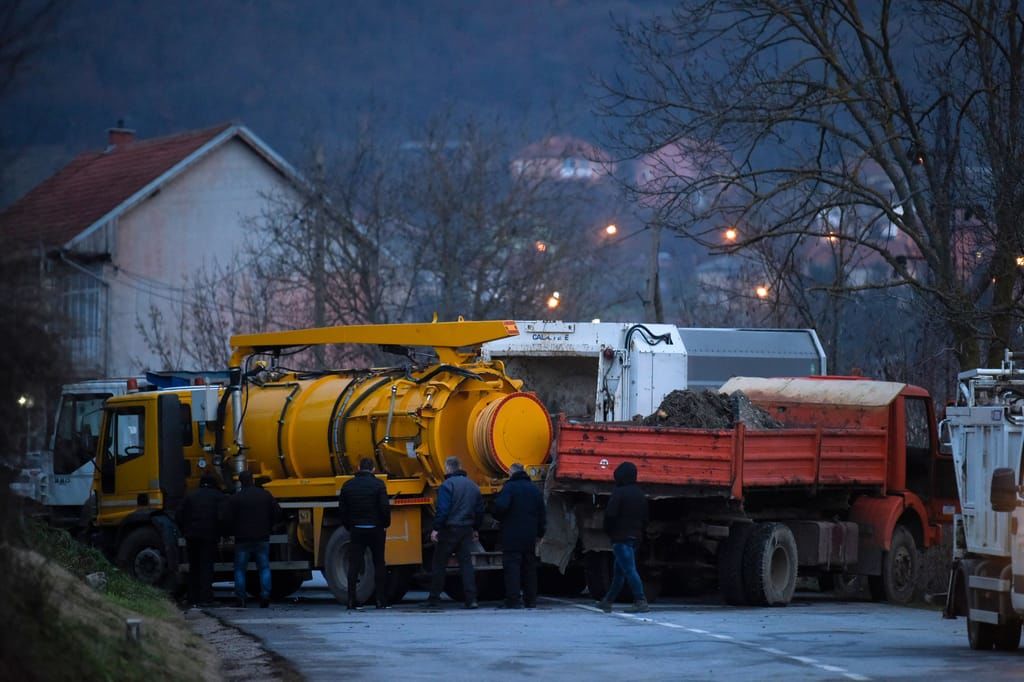 Trucks form a road barricade, set up by ethnic Serbs in the village of Rudare, Kosovo

Kosovo Serbs are now also refusing to participate in the new elections until their demands are met. These include the implementation of an EU-facilitated agreement that would give them increased power in the country.

Among Balkan countries, Kosovo and Serbia have the most strained relationship, with Belgrade refusing to acknowledge the 2008 declaration of independence of its former province.

The EU has been facilitating meetings between the two governments since 2011, attempting to foster agreements on outstanding issues — such as license plate registration, which ostensibly sparked a wave of tensions in July.

“This crisis is the most serious and intense so far because it undermines the essence of the dialogue, which is the integration of the Serb community into the legal and political system of Kosovo,” said Bjeloš. “The mistrust between Serbs and Albanians in Kosovo has deepened as the result of the crisis.”

Western leaders are hoping more engagement will change that, and bring both Serbia and Kosovo into the fold.

Yet Serbia continues to advocate for the derecognition of Kosovo’s independence. And although more than 100 United Nations members have recognized Kosovo, full recognition has yet to be achieved. Five EU members do not acknowledge it as an independent nation — putting a significant strain on Kosovo’s relationship with Brussels.

Separately, Serbia has refused to join EU sanctions against Russia and only partially condemned its aggression against Ukraine.

All of this has turned EU and U.S. attempts to forge a deal between Kosovo and Serbia into a high-wire act.

“Both leaders are prepared to meet —the problem is the outcome,” said Lajčák, who has chaired most of the meetings between Kosovo and Serbia for the past years. “The last two meetings were OK in terms of atmosphere, but the visions of the two leaders did not overlap.”

“There are always high expectations from these meetings,” he added.

Lajčák stressed that this repetitive cycle of flare-ups followed by temporary solutions is forcing negotiators to engage in “firefighting, since you cannot focus on normalization when there is a crisis.”

So while the latest crisis “is now over as we speak,” he said, “I hope that in a week from now we will not be facing another crisis — or we can forget about normalization.”

The biggest hurdle between the two governments is Serbia’s insistence on implementing a 2013 agreement that would grant Kosovo Serb representatives the institutional power to manage certain aspects of life, such as the local economy and education, on their own.

Kosovo is reluctant to adopt this new structure, claiming it would make the north even more susceptible to Serbian — or perhaps even Russian — influence.

Brussels has maintained that all previous agreements need to be implemented, and that Kosovo stands to benefit since it will increase government control over everyday affairs in the north.

Lajčák insisted that the current timing is ideal for a resolution of the Kosovo-Serbia issue and that if the moment is missed, the dispute could drag on for decades. 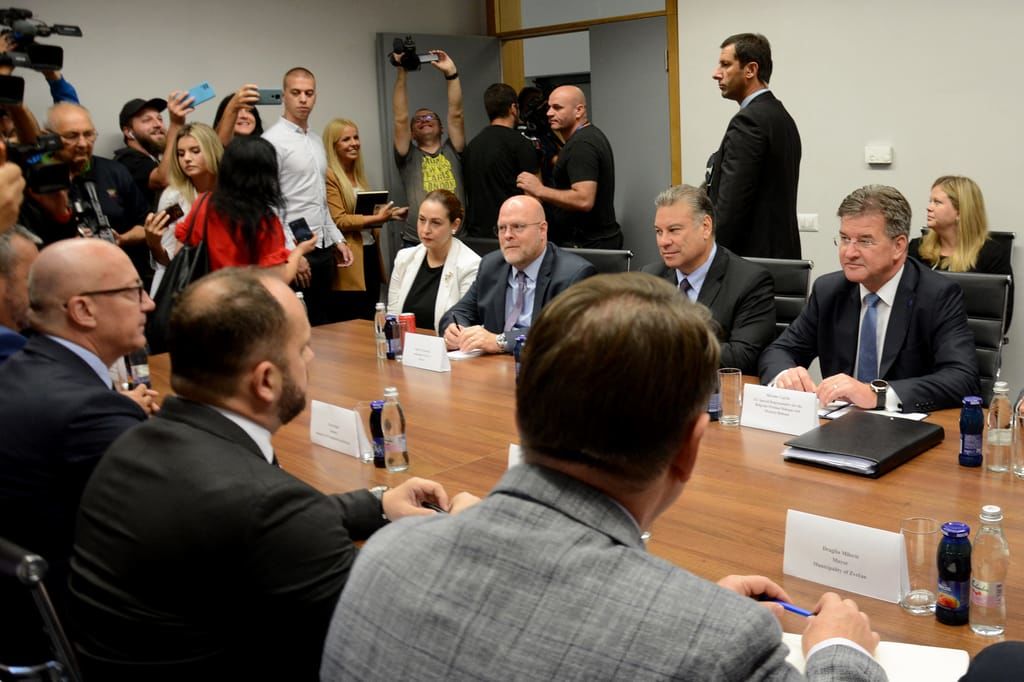 “Right now, we have a very favorable setup: We have the attention of the top leadership in the U.S. and the European Union, and we have exemplary EU-U.S. cooperation — so this is the real window of opportunity, sometime until December 2023 or early 2024,” he said.

European Parliament elections and a U.S. presidential election are both slated for a “super election year” in 2024.

“If things aren’t done by then, we will have to start again from scratch,” Lajčák warned. “If we go back to crisis and clashes, then we can forget about deadlines.”