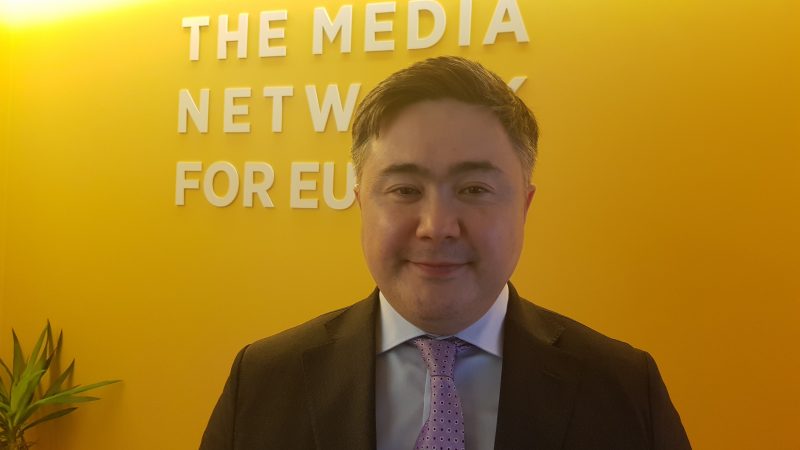 Kazakh official: We will not risk being placed in the same basket as Russia

In an exclusive interview, Timur Suleimenov, the first deputy chief of staff to the president of Kazakhstan, discussed the war in Ukraine, the impact of Western sanctions on his country, the drive for modernisation following the January unrest and changing geopolitical balances.

I usually ask visiting officials about the purpose of their visit, although this time, the tense international surroundings speak for themselves…

The main purpose, of course, was to discuss the situation with the current geopolitical crisis, the military action taking place in Ukraine, the sanctions applied on the Russian economy and financial system and their consequences on Kazakhstan, and the ways to mitigate them.

Secondly, to demonstrate to our European partners that Kazakhstan will not be a tool to circumvent the sanctions on Russia by the US and the EU. We are going to abide by the sanctions. Even though we are part of the Economic Union with Russia, Belarus and other countries, we are also part of the international community. Therefore the last thing we want is secondary sanctions of the US and the EU to be applied to Kazakhstan. And the third thing is to discuss the means to expand our cooperation with the EU.

When you say that Kazakhstan will not circumvent the sanctions, is it a message at your initiative, or have your Western counterparts expressed concerns?

It’s a two-way street. There were some voices not from the EU. Still, a former EU member, one of the members of parliament of Great Britain, raised concerns that probably sanctions need to be applied to Kazakhstan as well because our country is member of the Eurasian economic union. Therefore we enjoy the four freedoms of movement of capital, goods, services and labour force, and as she said, “we need to close the perimeter”.

But this is not the main reason. The main reason is our own will to come here, to our main trading partner and one of our key investment partners, to discuss the situation openly and say that yes, we will continue trading with Russia. We will continue to invest in Russia and attract investment for Russia: there is no way for our economy to do it differently. But we will do our best to control the sanctioned goods. We will do our best to control any investment from a sanctioned person or entity in Kazakhstan, and this is something we wanted to convey to Europeans openly. To demonstrate that we have a system in place, and the system is here, unfortunately, to stay for a long period.

Therefore, it needs to be a system, not a set of measures. This will require changes in the legislation, and this is what we are going to do.

Are you satisfied with the understanding you are getting from your European interlocutors?

Yes. We received complete understanding. We are very much satisfied.

Does Kazakhstan have a problem calling the war in Ukraine a war? You said “military action” in the beginning…

No, we don’t have problems calling things what they are. Russia chose to introduce legislation to prohibit the word “war”. They are calling it a special military operation. But in Kazakhstan, we call it what it is, unfortunately.

There were two non-binding resolutions by the UN General Assembly calling to end the war in which Kazakhstan abstained. Is this due to your treaty obligations with Russia?

Indeed, Kazakhstan is a member of both the Eurasian Economic Union and CSTO, the Collective Security Treaty Organization, so we are members of both the economic and military alliances of Russia. But the provisions of the treaties don’t apply to this particular case.

Of course, Russia wanted us to be more on their side. But Kazakhstan respects the territorial integrity of Ukraine. We did not recognise and will not recognise the Crimea situation and neither the Donbas situation because the UN does not recognise them. We will only respect decisions taken at the level of the United Nations.

Can you tell us how Kazakhstan’s situation is evolving following the dramatic events in early January?

The unfortunate January events were tragic. We lost about 150 lives. An investigation is currently ongoing, preliminary results were reported by the prosecutor general and the Ministry of Interior last week, but the final results are not out yet.

Once they are out, we will make them public. But the January events served as an important impetus, as a trigger for much-needed reforms and changes in Kazakhstan’s economy, society, in our political system. For 30 years, we had accumulated a lot of mismanagement, and without this bloodshed, I’m not sure if we would be as brave as a nation to advance on reforms.

The president took it upon himself recently in his speech in the parliament and address to the nation. He announced further reforms in the political system that will require amendments in the constitution, the liberalisation of the political field. We are empowering local powers and local governments, and more.

The January events were triggered by the increase in the price of a popular fuel most people use for their cars. But nowadays prices are increasing not only for energy. Kazakhstan is an energy-rich and resource-rich country, what are the strategies there?

You are right; the trigger for the January events was the price of liquified gas. Kazakhstan has great potential in terms of gas production. Unfortunately, now the gas market is heavily regulated, limiting the ability to develop our vast gas reserves. To change that, we will need to change the pricing, unfortunately. This is a very sensitive issue, not only for our country. It’s the same everywhere. Therefore you need to do it very carefully and explain it to the people.

Is Kazakhstan cut out of certain export routes because of the war in Ukraine?

Yes, you can say so. Most of our oil, 90%, goes through Russian territory, most of our exports go to Russia or through Russia. So the current situation poses many problems to many industries in Kazakhstan. Hopefully, when the military phase finishes, there will be unclogging of the roads and railroads. But we need to diversify our export routes.

Given your good relations with China and your country’s expertise with your neighbour, which way is China going? With the West or with Russia? I know it’s a tricky question, but I want to ask it.

It’s a tricky question. But I think China is best positioned to take advantage of the situation because the Russians will have to pivot to China whether they want it or not. And the conditions in which the Chinese will be operating with the Russians will change because the bargaining power of Russia is lower than it was a month ago. And when you are so dependent on one partner, it makes you more vulnerable.

So I think China will try to stay above the battle. They would not want to engage in the sanctions war with the US and the EU. Most of the secondary sanctions the US is placing will be abided by the Chinese. But their trade with Russia will increase, and the technological dependence of Russia on China will increase as well.

What else did you say to the EU officials you met?

Kazakhstan is not part of this conflict. Yes, we are part of the Eurasian Economic Union, but we are an independent state with our own system, and we will abide by the restrictions imposed on Russia and Belarus.

We don’t want and will not risk being placed in the same basket. And we would like to expand our cooperation with the countries of the EU and the EU as a whole. We are the most westernised country in Central Asia. We share a lot of values. First of all, we share a continent because 300,000 square kilometres of Kazakhstan is in Europe. That part of Kazakhstan is much larger than most of the EU countries.

Come to replace Russia in the Council of Europe!

[laughs] We need to discuss that. We share a lot, we are right between Asian and Western civilisation, and we share pieces and features of both. The reforms that the president has put forward are pro-European, pro-democratic, and hopefully, in three to five years, you will find much more resemblance between us and countries like the Netherlands, France, Poland or other countries of the EU rather than authoritarian Asia.