Hungary's united opposition retained a four-point lead ahead of Prime Minister Viktor Orban's ruling Fidesz in a November survey by the think tank Zavecz Research, which also showed a decline in the ranks of the undecided ahead of a national election.

For the first time since taking power in a 2010 landslide, the 58-year-old Orban will face a united front of opposition parties on the ballot, likely to be held in April, that includes the Democratic Coalition, the Socialists, liberals and the formerly far-right, and now centre-right, Jobbik.

Amid a surge in inflation that is forcing the central bank to raise interest rates substantially higher than previously expected, Orban announced a cap on fuel prices as of Monday to shield consumers from further sharp price rises.

Orban's latest step follows a $2-billion tax rebate for families in 2022, paying an extra month's worth of pensions, scrapping the income tax for career starters and other pre-election measures which have triggered a surge in the deficit.

The Zavecz poll, conducted between Nov. 2 and 12 and published by the HVG.hu news site, showed the opposition alliance boosting its support by two points to 41% of voters, while support for Fidesz grew by the same extent, to 37%.

The ranks of the undecided fell sharply, to 14% from 23% a month ago, when opposition primaries to pick Orban's challenger next year ended with the shock victory of Peter Marki-Zay, an energetic political outsider.

Another November survey by the pro-government think tank Nezopont showed a comfortable lead for Fidesz among decided voters, while the liberal think tank Republikon put the opposition ahead by six points in a late-October survey. 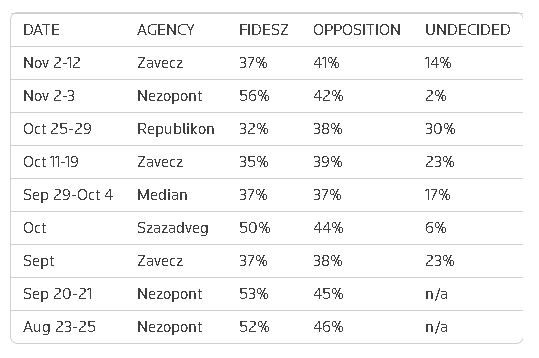 Jobbik party, and the smaller green and liberal LMP, Parbeszed