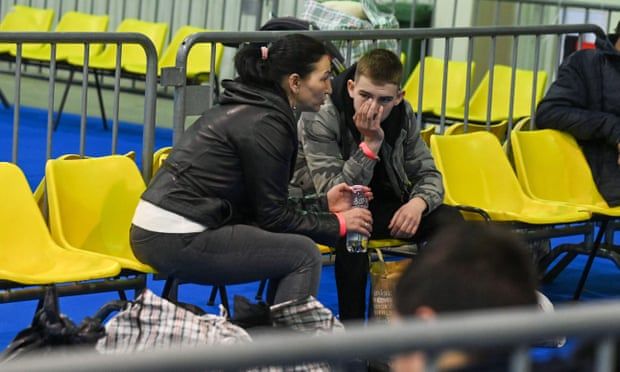 Claim 540,000 refugees welcomed ‘misleading’ as most travelling on to other countries, say rights groups
Hungary’s far-right government has been accused of inflating the number of Ukrainian refugees it is sheltering as it seeks to secure European funds to finance their welfare.

Days before what will be a closely-fought general election against a unified opposition bloc, Viktor Orbán’s Fidesz administration – which has previously trumpeted its hostility to those it considers illegal migrants – claimed it had accepted more refugees fleeing Ukraine than any other neighbouring country after taking Hungary’s population of 9.6 million into account.

Zoltan Kovacs, the government’s international spokesperson, said Hungary had welcomed more than 540,000 people escaping the conflict, a figure he said amounted to between five and six refugees for every 100 Hungarian inhabitants.

However, the Hungarian Helsinki Committee, a human rights NGO dedicated to helping refugees, called the statistics “misleading” and said most of those arriving subsequently travelled on to other countries. The number of refugees in Hungary was much lower than the official figures, the committee insisted.

It also said the Hungarian government had failed to take adequate steps to inform those who had chosen to remain of their right to official protection, and added that Hungarian communication efforts paled beside neighbouring Poland and Slovakia, which has provided online forms to apply for protection.

Despite the massive exodus from Ukraine, as of 27 March, according to official figures, only 7,749 people had applied for temporary protected status in Hungary entitling them to social welfare support including housing, the right to work and access to education, as required by an EU decision on how those fleeing the Russian invasion should be treated across the bloc.

Márta Pardavi, the Helsinki committee’s co-chair, said the relatively low number of applicants showed many refugees were merely passing through Hungary, while others were having trouble obtaining information about their entitlements.

“How many people entered at the border does not mean anything about how many are staying longer than the time it takes to transit Hungary,” she said. “In reality, there are far less Ukrainian refugees staying in Hungary.

“In its quest for additional funds from the EU, the Hungarian government uses the most impressive number it can find. However, it has to provide for a far less number in reality since a high number of Ukrainian refugees move on to other countries.

“It’s as if you count the number of people who go into a clothes store and then you tell the company owner that this is the number of your customers – but there’s a big gap between the number who walk in and the people who actually buy things. Actually getting protected status is not made easy, you have to queue up at the immigration office and no one has received it yet.”

Orban – who has declared that “all those fleeing from Ukraine will find a friend in the Hungarian state” – wrote to the European Commission on 18 March requesting funding from its recovery and resilience facility to help deal with the refugee inflow, which at that point he put at 450,000.

No decision has been made on the application.

Orban’s government has been in prolonged dispute with the EU over the suspension of funding as punishment for infringements against EU rule of law procedures, with Brussels having already frozen €7bn (£5.9bn) in Covid relief funds for Hungary.

Speaking to the Guardian in his office near the Hungarian parliament, Kovacs said he did not know how many refugees were in the country. “Many of them have biometric passports, which means they have visa-free movement within the European Union,” he said. “We can only have a relationship with those who apply for refugee status or asylum.”

In addition to those seeking protected status, another 80,000 had applied for 30-day temporary residency permits, he said.

Asked to explain the gap between those figures and the much higher number of arrivals, he said: “Many of those who have come from Ukraine are coming with the knowledge that they have relatives, friends, all over Europe and they try to spend some time with them until the war is over.

“The Hungarian state is doing everything according to what we have agreed with the united European opinion.”

Pardavi said some of those still in Hungary were staying in hotels at their own expense. Many had not applied for EU protected status because they were not aware of it, while those who had made applications have to wait up to 45 days for the process to be completed. In the meantime, welfare is being provided by charities and NGOs, she said.

In the Czech Republic – which, unlike Hungary, already had a large prewar Ukrainian expatriate community but no border with Ukraine – authorities have issued more 242,000 temporary visas to refugees and estimate the total number inside the country at 300,000, far below the Hungarian entry figures. More than 240,000 have already registered for Czech state health insurance. The Czech Republic is also seeking European funding to help deal with the crisis.

Poland has had £30bn in EU pandemic recovery funding frozen in a long-running dispute over rule of law breaches. But the country’s differences with Brussels have begun to fade into the background as its humanitarian effort to help refugees and expressions of solidarity with Ukraine have earned it plaudits. Poland has so far received more than 2 million people fleeing the conflict in Ukraine and the Polish government has said it will spend €2.2bn this year alone to support them. Warsaw is pressing for the pandemic funding to be released, plus other sources of EU compensation.
#Covid
Add Comment