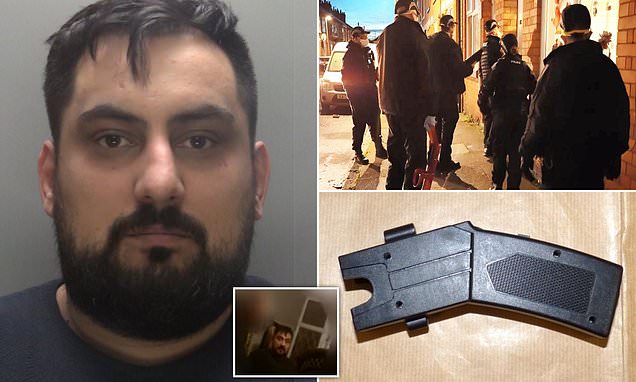 Human trafficking boss smuggled men into the UK from Hungary

Janos Sztojka, from Braunstone, Leicestershire, 'lived like a king' while keeping a 31-year-old man with learning difficulties as a virtual prisoner over the course of two years.

A human trafficking boss has been jailed for six years after using a man as a slave, disciplining him with a stun gun and making him sleep next to his dogs.

Janos Sztojka, 33, from Braunstone in Leicestershire, 'lived like a king' while keeping a 31-year-old man with learning difficulties as a virtual prisoner over the course of two years, a judge heard. 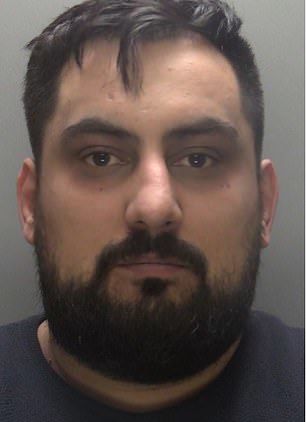 Janos Sztojka (pictured), from Braunstone in Leicestershire, 'lived like a king'

Video footage captured the moment Sztojka was arrested and his home was raided by police before a stun gun and wads of cash were found.

Sztojka forced his victim to carry out household chores and spent the majority of the money the man earned at a Derby food production factory - including buying a lavish £180 birthday cake for his wife and flights for four other men he trafficked into the UK from Hungary.

Leicester Crown Court heard Sztojka, who used a number of aliases including Johnny Boss, controlled the finances of all five men and made sure they were escorted to and from the factory where he arranged for them to work.

He also forged utility bills to open bank accounts in each of their names - which he then sold via the black market to other crooks who used the accounts to launder around £150,000.

Sztojka also admitted possessing a prohibited item, a Taser-like stun gun, that was seized from his home, which his slavery victim claimed was used to discipline him.

The defendant, who has previous convictions for burglary and money laundering, was deported from the UK in May 2017 but returned soon afterwards.

He then arranged for the Hungarian males, who were between 19 and 56 years old and spoke little English, to come to Leicestershire under the guise of providing them with well-paid jobs.

But the victims' salaries were paid into Onepay card accounts, which were controlled by Sztojka, and they were given only 'a fraction of what they earned'.

The domestic slave victim later told the police Szoska 'took me for an idiot.'

Rufus D'Cruz, prosecuting, said: 'He had no access to cash and was paid in food and cigarettes and sometimes not even that. 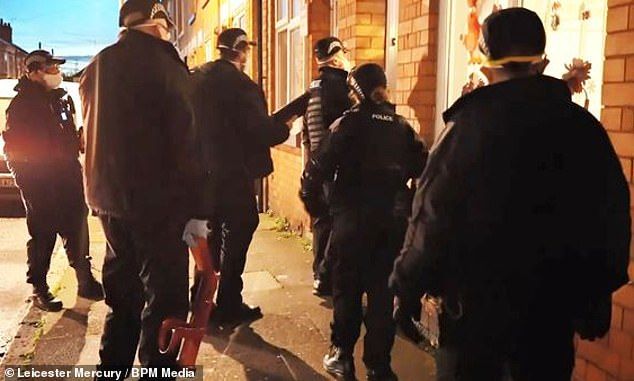 Sztojka forced his victim to carry out household chores and spent the majority of the money the man earned at a Derby food production factory. Pictured, a police raid on the house 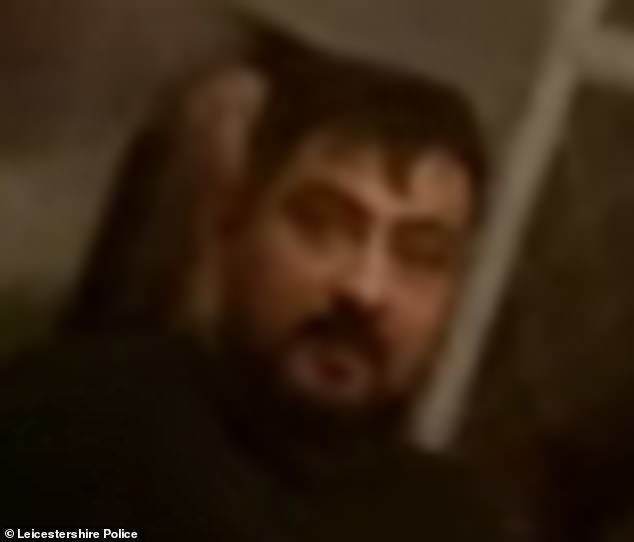 The defendant, who has previous convictions for burglary and money laundering, was deported from the UK in May 2017. Pictured, during Szojka's arrest

'He wasn't allowed to leave the house, the defendant would lock the door and not let him out and he felt like he was in prison, being monitored by CCTV cameras.

'If he refused to do something he would be shouted at and slapped on the face, leaving him scared, stressed and nervous.

'His sleeping accommodation was shared with three dogs and he described himself as "the fourth dog in the household". He wasn't allowed to eat what, or when, he wanted.'

One clip shows Sztojka being led away by officers as he was arrested alongside several others.

Another shows a stun gun and police handling wads of cash that was earned by the victims.

Sztojka used a stun gun on his victim on three occasions, pressing the weapon onto his leg over his trousers and once causing him to fall on the floor, leaving him feeling 'hurt and humiliated', the court heard.

The 30,500-volt weapon was recovered by the police and the defendant claimed it was left at his home by 'someone else.'

Between October 2018 and December 2020 neighbours noticed the victim regularly cleaning up outside the house while Sztojka did nothing other than 'strutting around like he was a king.'

They said the victim was often seen 'rushing out to unload the shopping' from the car.

Another witness said the victim was treated 'like a b***h boy', was constantly being shouted at and appeared 'visibly scared'.

His salary payment card was used by the defendant or his partner for purchases in shops such as Boots and at petrol stations in Leicester, often while the victim was busy working.

The offences were discovered when the victims' employment agency and the factory's management reported their concerns about the five Hungarian workers to the government's Gangmasters and Labour Abuse Authority, resulting in an investigation.

Four of the victims, who were living at the home of the defendant's relative in Wigston, were only in the UK for about four months before their 'dark situation' was discovered. 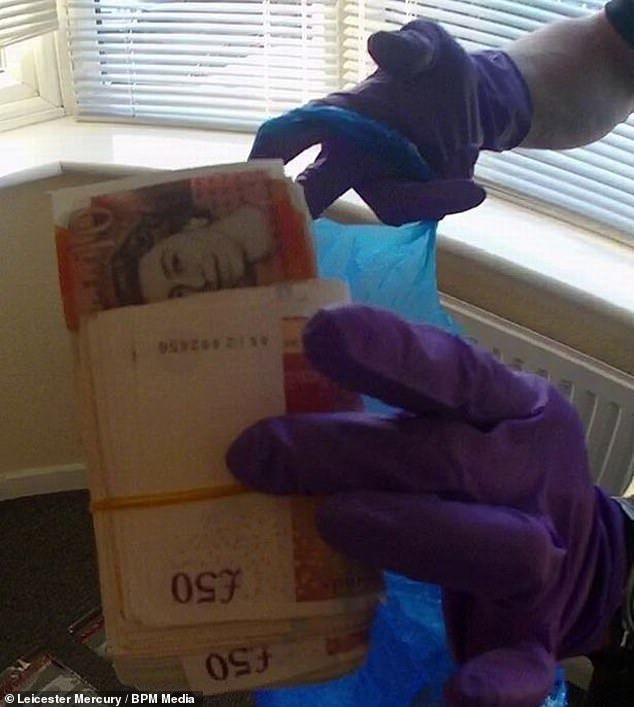 Sztojka was said to come from a 'Romany gypsy background' with no relatives remaining in Hungary. Pictured, money found during a raid on the house 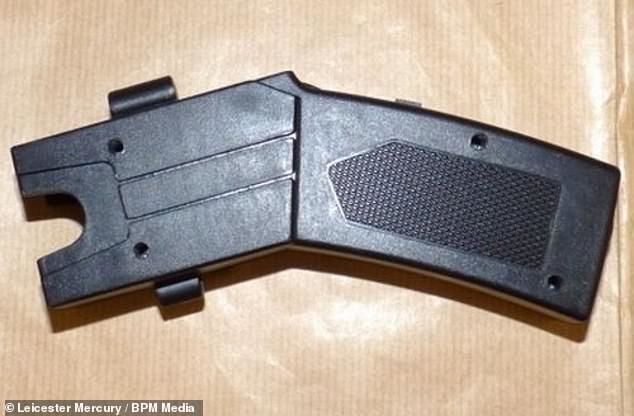 Sztojka also admitted possessing a prohibited item, a Taser-like stun gun (pictured), that was seized from his home, which his slavery victim claimed was used to discipline him

Judge Robert Brown told Sztojka: 'The treatment of your victims, in particular one of them, was deplorable.

'He was particularly vulnerable, with learning difficulties, and you had him captive in your household for two years. When he wasn't working in a factory he was performing chores in your home at your behest.

'There was a high degree of deceitfulness towards all five victims as you controlled their pay cards and they were economically trapped.'

He said Sztojka, who has a partner and a small child from a different relationship, would be deported to Hungary at the end of his sentence - for a second time.

Henry James, mitigating, said four of the victims were given a portion of their wages and had not complained about the food or accommodation they were given - and one left the situation of his own free will. He added they were not kept in squalor.

He claimed the defendant fraudulently opened bank accounts in the victims' names to sell on under the instructions of someone else, which he said was the main reason for bringing the men into the country on a short-term basis.

Sztojka was said to come from a 'Romany gypsy background' with no relatives remaining in Hungary.

He was jailed for six years after admitting five counts of facilitating travel of a person with a view to exploitation, one count of requiring someone to perform forced or compulsory labour, one count of making or supplying articles [bogus utility bills] for use in fraud and one count of being concerned in money laundering.

He was also made the subject of a 10-year Slavery and Trafficking Prevention Order.

The defendant will face a proceeds of crime confiscation hearing later in the year, with a view to seizing any assets and compensating the victims.