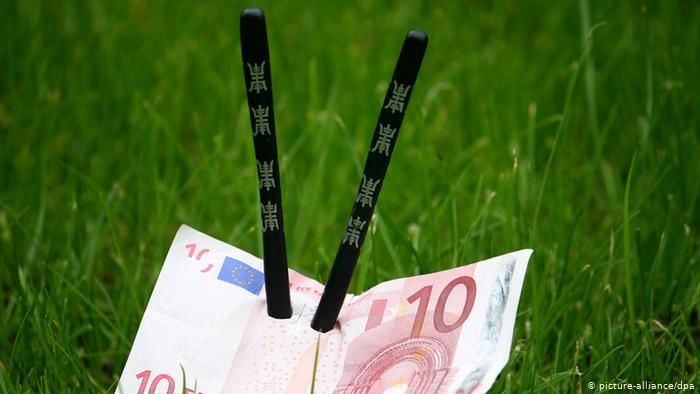 Has Eastern Europe wised up to Chinese investment?

China wants to extend its influence in Central and Eastern Europe. Some on the EU's eastern wing are calling for resistance to what is being labeled China's "corrosive capital," but others don't see a threat.

Hawkish observers argue that China's foreign investments are — by definition — corrupting, with a corrosive influence on smaller, often only nominally democratic and market-based nations, including those on the eastern periphery of the European Union (EU). Others are less convinced that Chinese investment represents a genuine threat. The EU members in Eastern Europe stand at a crossroads in their relations with Beijing and Brussels.

"These investments will have repercussions across the EU," as Eric Hontz, who leads the Washington-based Center for International Private Enterprise's work on corrosive capital, told DW.

"Corrosive capital" — a concept pioneered by the Center for International Private Enterpris (CIPE) — refers to external sources of financing that lack transparency, accountability and market orientation.

In the cases of Slovakia and the Czech Republic, Beijing has managed to develop significant ties with local oligarchs who have financial interests in China. The two countries are sometimes refered to as "captured."

"These ties were later instrumentalized to foster policies that are conductive to Chinese interests," Simalcik said. "By focusing on the oligarchic class, China has actually been able to exert influence over both countries simultaneously," he added.

As a result, Chinese entities have been able to exert influence in areas like government communication networks.

A recent report by CEIAS shows how the Chinese government has been able to gain a footing into the Czech Republic and Slovakia through a banking company known as CEFC China Energy, which has been used to become a minority shareholder in a Czech-Slovak financing group, J&T Finance.

Hungary willing, while Poland muddles on

Hungary has the highest share of Chinese investment after Serbia in eastern Europe and plans several new projects, including construction of the controversial Fudan University campus in Budapest.

The political elite of the Visegrad member, Poland, meanwhile, is in a unique situation vis-a-vis its relationship to both China and the EU.

"Poland is criticized on the one hand by the EU for democratic backsliding while suspicious of Chinese investments on the other due to a similar historical struggle as the Baltic States," Hontz said.

Poland's attitude towards China is shaped by the state of US-China relations, as Warsaw has usually played the role of a loyal and committed partner to Washington. It has already shown its alignment with US policies on 5G.

"However, Poland's actions may not always be entirely predictable, given the ideological primacy placed on the assertion of national interests and identity that may lead to policies that are counter to its European and American allies," Rumena Filipova, co-founder of the Institute for Global Analytics in Bulgaria, commented.

Nevertheless, Poland has significant economic relations with China, especially with regards to railway transportation, since Poland is a key transit country for railway cargo transports from China.

"It would not be surprising if China managed to gain new inroads and inject more corrosive capital into the country in the coming periods," Simalcik argued.

Lithuania led a boycott of the 17+1 (eastern European countries + China) summit in February and said it wants the EU to deal with China only at a 27+1 level.

"Lithuania's tougher stance on China is viable, given that bilateral Lithuanian-Chinese financial and trade relations are not of a substantial scope," Filipova said.

"Moreover, Lithuania is shielded in political and security terms through its memberships in the EU and NATO. Nevertheless, Vilnius's assertive stance is remarkable," she added.

"Lithuania's case shows that Chinese influence in CEE is actually fragile as it focuses only on select segments of society and politics," Simalcik elaborated.

It remains to be seen whether and to what extent the other two Baltic States will emulate Lithuania.

Simalcik says Estonia seems to be more likely to follow the pattern, although probably in a more diplomatic fashion than Lithuania. "As for Latvia, it will probably be the most reluctant of the three to engage in critical China policy, partially due to public demand as Latvians are among the European nations that perceive China more positively," he says.

Typically ties were developed only with ruling coalitions and not with opposition parties, he went on. As a result, wherever the former coalitions lost general elections and former opposition came to power, as in the case of Lithuania and Slovakia, governments became increasingly critical of Beijing. "Similar trends can be expected in the Czech Republic and even in Hungary if the opposition manages to sway the popular vote," Simalcik said.

"In a sense Lithuania has lifted the mask for the EU to see China as a more mercantilist power with a zero-sum approach to politics," Hontz concluded.

But there has been a smaller influx of Chinese capital into Bulgaria and Romania than into Central Europe and both countries have prioritized the EU and NATO.

"I wouldn't say Bulgaria and Romania are less affected than the Czech Republic and Slovakia by corrosive Chinese capital, but rather affected in different ways," Hontz said.

"The political elite in those countries are also perhaps a bit more aware of the potential negative influences of these investments on their own ability to influence the political economy of the nation."

Bucharest has adopted a memorandum that blocks the awarding of public infrastructure contracts to companies from countries that do not have a bilateral trade agreement with the EU. In 2019, Bucharest banned the Chinese telecommunications firm Huawei from its networks. It has also halted cooperation with China on the construction of the Cernavoda nuclear plant.

A recent studyfrom the Central and Eastern European Centre for Asian Studies (CEECAS) suggests that governments in the region tend to offer an inflated view of China's presence. It notes also that China's FDI positions in the CEE countries is modest.

According to China Global Investment Tracker data, in the period 2000-2019, of $129 billion (€107 billion) worth of Chinese investments in Europe, only $10 billion went to the countries of CEE.

The value of Chinese direct capital investment in Europe was down in 2020 from $13.4 billion in 2019 to $7.2 billion, according to Baker McKenzie. However, Hungary bucked this trend. Bilateral trade between China and Hungary reached $5.35 billion in the first half of 2020, up 9.8% year-on-year. Total Chinese foreign investment in Hungary stood at $5 billion, with companies such as Huawei, Wanhua and Bank of China leading the way.

By comparison, Bulgarian exports to China in 2020 were $870 million and imports $1.7 billion. China increased its share in total Bulgarian exports from 0.6% to 2.7% between 2006 and 2020. Chinese investment in Bulgaria is under 1% of inward FDI. In 2019, Romanian exports to China were worth $850 million, while imports to Romania were $5 billion. In terms of FDI, China does not figure among Romania's top investors. The value of Chinese FDI between 2000 and 2019 in Romania was $1.4 billion.

"I was more worried two years ago when Chinese investments tended to be seen as purely commercial," Mikael Wigell, director of the Global Security research program at the Finnish Institute of International Affairs, told DW.

"Now I think Europe has got wise to the fact that China uses its investments to gain influence and drive a wedge in the EU. Huawei was a wake-up call," Wigell added.