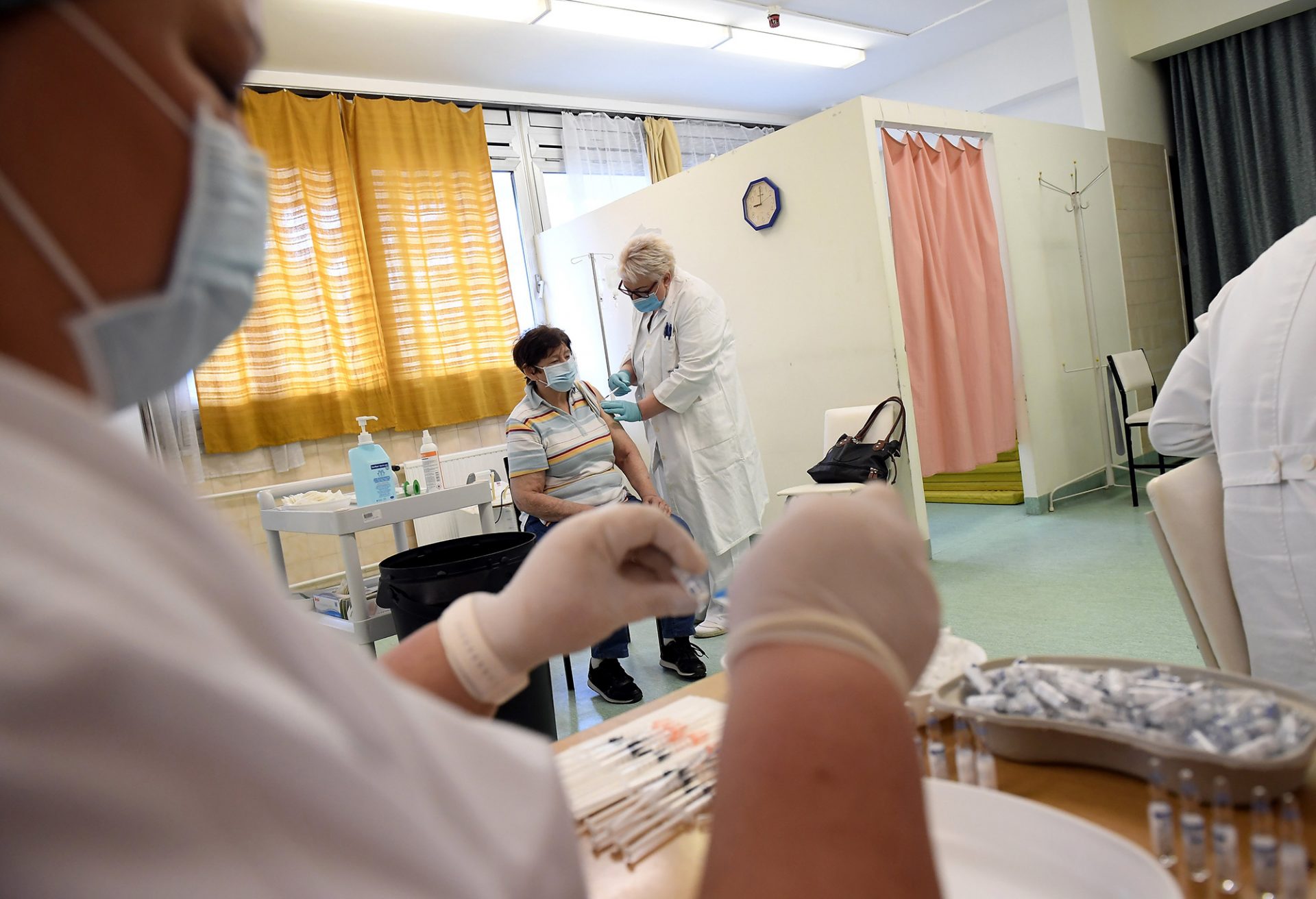 The government has decided to give employers the right to require vaccination against Covid-19 as a precondition of employment in order to ensure workers' safety, the prime minister's chief of staff said on Thursday. The state, as an employer, will also apply the measure, and mayors will have the right to introduce the requirement at local councils, Gergely Gulyas told a regular press briefing.
Gulyas said the government has also decided to make mask-wearing mandatory on public transport again from Nov. 1, and to introduce a ban on visitors at hospitals.

He said the measures were aimed at encouraging as many people as possible to get vaccinated.

All epidemic projections show that during the fourth wave the number of infections could jump significantly and the number of patients who need hospitalisation or ventilator care could also increase, so the situation requires the introduction of new measures, he said.

The number of infections is lower in countries with higher vaccination rate and “the lower the vaccination rate, the more tragic the situation becomes” Gulyas said. Hungary is among the best in the region but still below the EU average, he added.

The cabinet has consulted with experts and made its decision at the proposal of the operative board in charge of pandemic management, he said. Giving employers the right to require vaccination has been recommended by employers’ associations, he added.

Compared to vaccination, the effectiveness of all other forms of protection is only secondary, which is why every measure that can boost the vaccination rate is important, he said.

Meanwhile, on the topic of migration, Gulyas also said Hungary will send a letter to the European Commission asking it to cover at least part of the costs of the country’s border fence.

Migration pressure on Europe’s borders is growing and is expected to keep increasing, he said.

“It would be nice if the European Commission switched from supporting migration to supporting the protection of external borders, because if we don’t want Europe to be destabilised during the pandemic and the economic recovery then we need effective border protection, which requires proper European approval,” he said.

The pressure of migration is growing as a result of the situation in Afghanistan and events at the Belarus border, he said. The number of illegal border crossing attempts is currently a daily average of 319 as against 97 in the same period of last year, he added.

A debate on handling migration is again under way in Europe, and for the time being “the European Commission is unfortunately on the side of migration”, he said. The commissioner for home affairs recently said that post-pandemic recovery was only possible with the involvement of migrants and migrant organisations, he added.

Gulyas said the EC was unable to grasp “the right answer” to the problem, but a growing number of people, he added, were starting to realise it. He cited European People’s Party group leader Manfred Weber who, Gulyas said, had clearly voiced support for the construction of physical borders and called on the EU to contribute to border protection.

In response to a question on making vaccination mandatory, he said the measure applied to getting two shots, and exceptions in medically justified cases would be given in line with the rules already in force in health care.

Those that refuse to get vaccinated can be forced to take unpaid leave, and if the situation persists for more than a year while the requirement still in force, then their employment can be terminated, Gulyas said.

He said the measure was justified because the vaccination rate had to be increased in order to fight the fourth wave and prevent future waves of the epidemic. More than ten organisations have requested its introduction in the area of tourism, as well as the Chamber of Industry and Commerce, he added. The first shot will have to be administered by Dec. 15 and the measure will stay in force until “the epidemic stays with us”, he said.

Mandatory vaccination will be standard practice in state companies and large state-run systems, such as among teachers, he said.

The vaccination rate in the public sector is significantly higher than the national average, but, for instance, in the armed forces it is lower. He added that home office was not a planned option in public administration.

Gulyas said the vaccination rate in Budapest was around 80 percent. Mandatory mask-wearing in public spaces was not discussed at the cabinet meeting, he added.

In response to a question, he said a study was still in preparation to assess why the Covid mortality rate was higher in Hungary than in Austria.

Some hospitals have already introduced bans for visitors but exceptions would be maintained, for instance, in the case of visits to people nearing death. Postponing scheduled operations or reopening the epidemic hospital of Kiskunhalas has not been discussed because there is still a sufficient number of free hospital beds, he added.

Without citing exact figures, Gulyas said there were “plenty of free ventilators available” in Hungary.

He also said that the government was not planning to make PCR testing free of charge.

Gulyas said any measure that discouraged people from getting vaccinated and made it easier to “access alternative solutions” was wrong, noting that the government believed a high vaccination rate was the only way to curb the spread of the virus.

He said the government was prepared to help the biggest employers set up vaccination points for their employees if technically feasible.

In response to another question, Gulyas ruled out another nationwide lockdown. He also said the government had not discussed bringing back daily press briefings by the operative body responsible for handling the pandemic.

Meanwhile, he said the new vaccine plant in Debrecen, in eastern Hungary, “will have to be completed by the end of next year”. Until Hungary has a Covid vaccine of its own, it will have to manufacture it under a licence, he noted.

Asked about EU Home Affairs Commissioner Ylva Johansson’s recent comments supporting migration, Gulyas said every country should decide for itself whether it had a need for migrants. “Hungary has always been tolerant and doesn’t think it should tell other member states how they should decide on the issue of migration,” he said. Gulyas noted that Hungarians, in a referendum in 2016, had rejected migration “by a majority not seen since 1989”.

Asked about the EU post-pandemic recovery funds, Gulyas said Hungary was prepared to reach an agreement on them but was expecting Brussels to try to interfere in the 2022 election. “And then the agreement on the recovery funds could be delayed until the election,” he said. Hungary has been pre-financing EU projects for the last eight years, Gulyas said, adding that the question was when those monies would be accounted for by the EU.

Commenting on the European Commission’s decision to select news portal 444.hu to join a project to help fight disinformation in Hungary, Gulyas said the EC’s “interference in domestic political affairs” could be considered a breach of the EU treaties. “Any form of foreign meddling in a national election is dishonest, especially if it is done by an EU institution which, according to the treaties, doesn’t involve itself in partisan politics,” he added.

On another topic, Gulyas said the government was keeping an eye on petrol prices and its effects on households, and was looking at ways to bring them down. Any intervention, however, would only happen based on the economic effects of the price increase rather than on whether the price crosses a certain threshold, he added.

Meanwhile, he said Hungary’s gas reservoirs were filled to 77 percent of their total capacity, which he said was enough to cater to the country’s needs throughout the winter.

Gulyas also said talks on the minimum wage between the government, employers and unions were going well, but employers were demanding tax cuts. This will primarily come in the form of a reduction to the social contribution tax, but two other taxes, including the business tax, could also be reduced, he added.

Asked about the state’s plans to repurchase Liszt Ferenc International Airport, Gulyas said the deal could be concluded in a matter of months, adding that the airport required new upgrades.

Asked if the government planned to intervene on the fertilizer market to stabilise prices, Gulyas said they were aware that the sector was in need of help and the government was looking into the matter.

He said the 2022 election campaign was expected to be “rough”. He added that the country had been run more effectively by the current government than by the Socialist-Liberal administration between 2002 and 2010, so it was to be expected that Fidesz’s political opponents would conduct a “rougher campaign, complete with allegations and slander”.

Meanwhile, asked about the “tens of thousands of people” moving out of Budapest, Gulyas said the city’s mayor, Gergely Karacsony, had campaigned on introducing housing subsidies but had not kept his promise, while the capital, he added, was far more rubbish-strewn than two years ago and was beset by traffic jams and homelessness problems.

Responding to a question about his views on a new film depicting the events of 2006 and the role of former prime minister Ferenc Gyurcsany, he praised it. He added that the fact that “far more people” had participated in last weekend’s pro-government Peace March than the opposition demonstration “speaks volumes”.

On the subject of the MOL-INA case in connection with a conviction in Croatia of Zsolt Hernadi, MOL’S CEO, and the Croatian Supreme Court’s decision to uphold the conviction, Gulyas, citing the international arbitration court, said the case had not been conducted according to the rule of law, while the same court had also ruled that the MOL-INA contract had complied with the law. Hungary’s legal system found that it would not be justified to extradite Hernadi to Croatia, he added.

Put to him that the budget of public media foundation MTVA next year will be double that of 2010, Gulyas said hopefully Hungarian Television will operate more efficiently and with more channels.
#Afghanistan  #COVID-19  #vaccine  #Covid
Add Comment