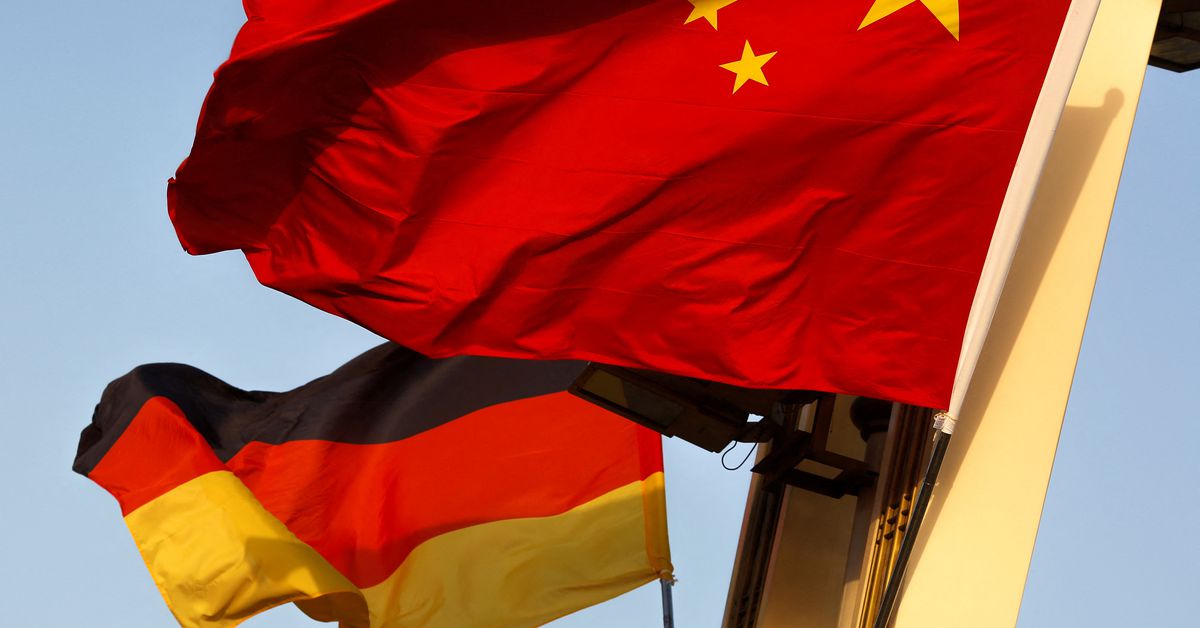 When German business chiefs got wind last month of an economy ministry proposal to screen all company investment going into China as part of a raft of new measures, there was uproar.

The investment proposal was soon shelved, a source in the ministry and a business leader told Reuters.

Annoyed they hadn't been sufficiently consulted on proposals to make business with China less attractive that could have big repercussions for German firms, senior business leaders later pushed back in a meeting with Economy Minister Robert Habeck.

While no conclusions were drawn during the video call on Sept. 21, the meeting, recounted by two of the participants, shines a light on the angst within German boardrooms about the government's push to recalibrate its relationship with China.

The economy ministry declined to comment when asked about the meeting. The Green Party, which runs the ministry, has long advocated taking a harder line on China and Habeck said last month that Germany would adopt a tougher approach on trade.

The investment screening proposal floated by the ministry was driven by a desire to limit transfers of certain technology and to avoid increasing dependencies in some sectors, one of the people at the meeting and a government source said.

"We can only warn against Germany turning away from China," said Markus Jerger, head of the Mittelstand Association, part of an alliance representing over 900,000 of the small and medium-sized firms that form the backbone of Europe's biggest economy.

"To put a break on the German economy's China activities, as the economy ministry would like, or is trying to do, is the wrong way," said Jerger, who also attended the meeting with Habeck.

Politicians and executives in Germany have broadly come to agree that the country needs to lessen its economic dependence on China, given their concerns about industrial espionage, unfair competition or human rights violations - concerns that Beijing has strongly rejected as being unfounded.

Russia's invasion of Ukraine has also been a blow to the long-held German maxim that economic interdependency would help open up authoritarian states and sharpened Berlin's focus on how it should weigh profit against risk in its relations with them.

But when it comes to China, businesses say the sticking point is how Germany can reduce its dependence without inflicting more harm on an economy already facing a recession next year - and without provoking a backlash from Beijing.

Cracks are also emerging within the three-way coalition government that took office in December and is due to publish Germany's first China strategy document next year.

The junior parties, the Greens and Free Democrats, are more hawkish than Chancellor Olaf Scholz's Social Democrats (SPD), who want to avoid triggering a U.S.-style Cold war with China.

"Decoupling is the wrong answer. We don't have to decouple from some countries," Scholz, who plans to visit China later this year, said on Tuesday. "I say emphatically we must continue to do business with China."

German investment and trade in China hit record levels in the first half of 2022 and big business says there's no question of pulling back from the world's second-biggest economy.

Instead, corporate giants such as BASF and carmakers BMW (BMWG.DE), Mercedes-Benz (MBGn.DE) and Volkswagen (VOWG_p.DE) are ploughing more money into China to create independent local supply chains, in part to ring-fence their operations from geopolitical disputes and trade wars.

"With the 'local for local' strategy, we stabilise our regional portfolio against external influences in the best possible way," a BASF spokesperson said.

Mercedes-Benz, Volkswagen, BMW and BASF were together responsible for a third of all European investment in China in 2018-2021, according to a study by Rhodium Group, a research company based in New York.

"It is impossible to completely disentangle China and Europe," said Tobias Just, spokesperson for Mercedes-Benz, which sells three times as many cars in China than the United States and counts two Chinese entities as its biggest shareholders.

"Our strategy is local for local, not just for geopolitical reasons, but for natural hedging, proximity to core markets and cost benefits as well," Just said.

BMW and Volkswagen also told Reuters they were standing by plans to invest more in their long-standing Chinese operations.

The Rhodium study said, however, that smaller European companies were becoming more reluctant to accept the growing risks of investing in China.

A spokesperson for the economy ministry said it was closely following the investment behaviour of German companies as part of its strategic considerations on how to deal with China.

During their meeting with Habeck, big business leaders tried to make clear they were not naive about China and were looking to diversify, at the same time as doubling down on existing operations, the two participants who declined to be name said.

Habeck promised to continue the dialogue with the business community and another meeting has been arranged for the first quarter next year, the two people said.

"He has a steep learning curve, he is very open," one of them said. "The problem is that he is starting right at the bottom."

The economy ministry declined to comment when asked about a meeting next year, or the remarks about Habeck.

Some of the measures Berlin has said it wants to pursue to reduce its dependency on China are uncontroversial, like seeking new sources of some key commodities such as rare earth metals.

But other proposals have raised alarm bells in the business community as it fears the measures would put them at a competitive disadvantage in what is still the world's fastest growing major economy, despite an expected slowdown next year.

Reuters reported last month that the economy ministry was considering curbing export and investment guarantees as part of its new China strategy.

Germany's Mittelstand companies warn this would hit them hard - and much harder than the corporate giants with more financial firepower.

"If governmental support for exports were to be cancelled, then I estimate that 50% to 70% of our members would probably no longer be bold enough to enter the market," the Mittelstand Association's Jerger said.

Business leaders said Berlin should liaise more closely with them on any China measures and they were relieved to finally discuss the matter in person with Habeck.

Some executives said they were lobbying Berlin to encourage firms to find new markets, for example through new free trade deals, rather than seeking to curb their business in China.

"Instead of punishing companies for doing business with China, the right approach would be to incentivise business with other countries," said Ulrich Ackermann, head of the trade department at Germany's VDMA engineering association.

Business leaders told Reuters they were concerned that even the debate about possible policy changes was already affecting their relations with China, which has urged Berlin not to politicise trade.

Agatha Kratz at Rhodium said German companies may also be underestimating the reputational risk of doubling down in China, particularly in terms of how their actions were perceived in the United States, which is now Germany's biggest export market.

"They are still a little too hopeful about being able to resist Chinese pressure, but also U.S. pressures in terms of barriers to trade," Kratz said.

But even under former Chancellor Angela Merkel, who took big business delegations on her many trips to China, the honeymoon was fading as the ruling Communist Party tightened its grip over society and the economy under President Xi Jinping.

The surge in Sino-U.S. tension over Taiwan has been another wake-up call for Berlin this year.

While government officials say Germany's economic ties with Russia did not stop Berlin pushing for sanctions over Ukraine, some lawmakers fear it might be harder to get tough with Beijing in the event of any conflict over Taiwan.

"If the unthinkable were to happen, right now, we would not be able to impose sanctions, we would only be able to wag a finger and say, 'you can't do that'," said SPD lawmaker Markus Toens.