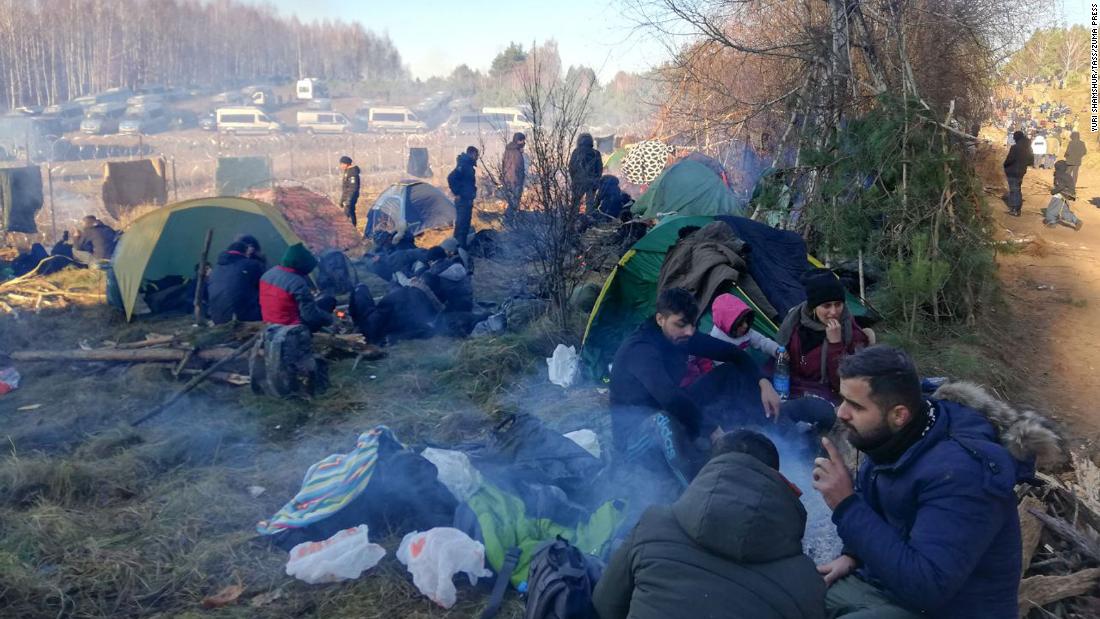 Thousands of migrants have set up makeshift camps in freezing conditions near the border between Poland and Belarus, as condemnation of Belarusian leader Alexander Lukashenko intensified Tuesday.

Poland has accused Lukashenko of attempting to orchestrate a crisis on the European Union's eastern frontier by funneling migrants to the border in retaliation for sweeping sanctions imposed on Minsk by the bloc and other Western powers in June. Lukashenko's government has repeatedly denied the claims, blaming the West for dangerous, sometimes fatal, border crossings and poor treatment of migrants.

International criticism of Belarus escalated on Tuesday, as the European Commission accused it of acting like "a gangster regime" and criticizing Lukashenko's "false promises" that have tricked migrants into believing they will gain "easy entry into the EU."

The diplomatic drama comes a day after ugly scenes on Monday, when groups of migrants attempted to breach the border, some of whom who were pushed toward the barriers by Belarusian services, according to the Polish border guard.

Polish authorities on Tuesday morning closed the Kuznica border crossing -- where huge numbers of migrants were seen congregating the day before.

Some 4,500 migrants are currently at the border near Kuznica trying to cross into Poland from Belarus, Polish border guard press officer Ewelina Szczepańska told CNN.

The Belarusian State Border Committee -- which is responsible for the country's external borders -- said in a statement that there are around 2,000 migrants at the scene.

Around 14,000 Polish soldiers, police and border guards are now stationed in the area, sparking fears of a major confrontation as migrants attempt to cross into Poland.

The situation on the ground appeared calm on Tuesday, according to Juergen Weichert, a journalist working for CNN German affiliate n-tv in Kuznica. Weichert reported that Polish police were trying to clear the area as much as possible, and that migrants on the Belarusian side of the fence were still trying to get through the barbed wire north and south of the closed Kuznica crossing.

Footage provided by the Belarus State Border Committee showed migrants wrapped in coats and hoodies huddled around small campfires, with aerial shots showing camps dotted along the Belarusian side of the border close to nearby forests. The video also showed the movement of what appeared to be military vehicles on the Polish side. 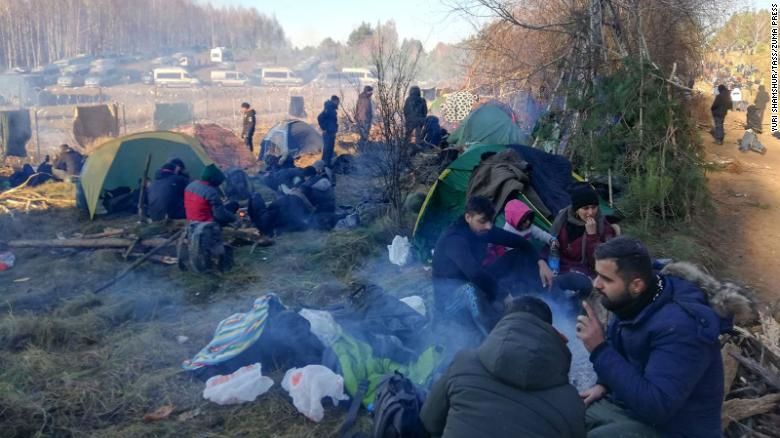 Temperatures dropped below zero overnight Tuesday as migrants camped out on the border of Belarus with Poland.

Polish Prime Minister Mateusz Morawiecki warned Tuesday that the situation was putting the security of the entire European Union at risk and again blamed Belarus for manufacturing a "hybrid attack."

"Sealing the Polish border is our national interest. But today the stability and security of the entire EU is at stake," said Morawiecki, who visited soldiers at the border on Tuesday.

"This hybrid attack of Lukashenko's regime is aimed at all of us. We will not be intimidated and will defend peace in Europe with our partners from NATO and EU," he added. 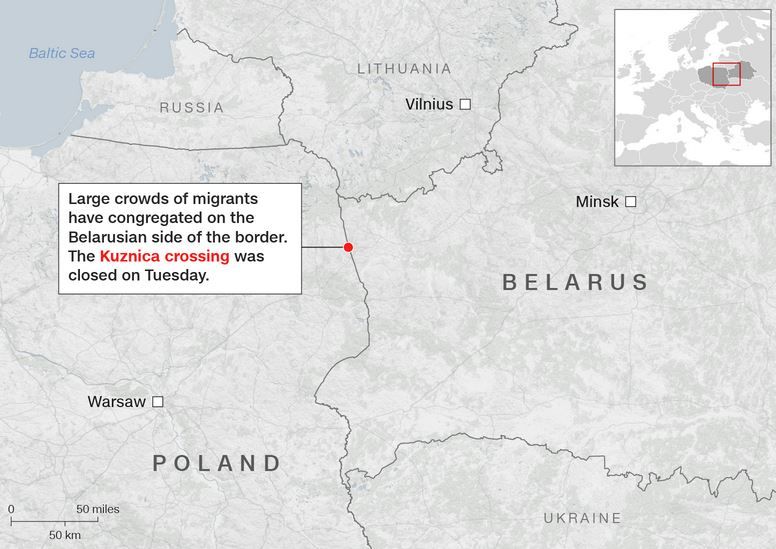 On Monday, Szczepańska said groups of migrants had been attempting to force their way across the border. The Polish defense ministry also tweeted Monday that there had been a mass attempt to cross and that migrants had set up a camp that was "constantly guarded by the Belarusian services."

In multiple videos from Polish authorities, hundreds of migrants could be seen walking towards the border. In one clip, some were shown trying to breach a fence using shovels, wire cutters and brute force.

Poland, Lithuania and Latvia have seen a surge of people attempting to cross into their countries from Belarus in recent months.

The Polish border guard recorded 309 attempts to make illegal crossings Monday and 17 people were detained, Szczepańska added. Poland has stopped over 32,000 attempts to cross the border since September, from migrants mainly from Iraq, Syria and Afghanistan, she said.

On Monday, Polish officials said it had mobilized thousands of additional military personnel in response to the influx of migrants. Lithuania -- which neighbors both Poland and Belarus -- also announced it was redeploying troops. 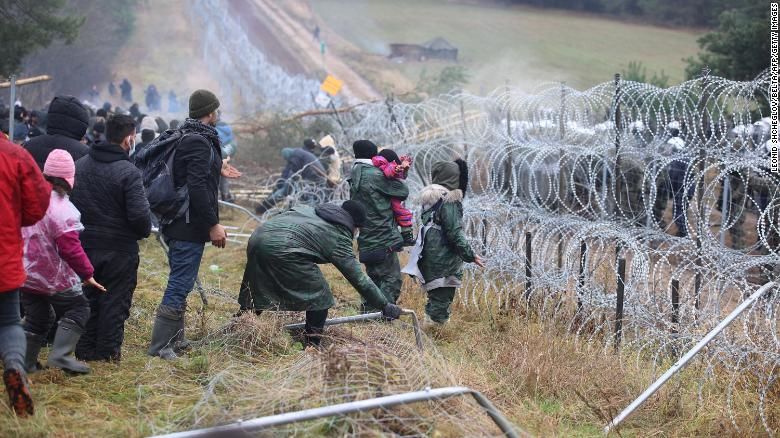 Poland said Monday that hundreds of migrants in Belarus were descending on its border aiming to force their way into the EU member in what NATO slammed as a deliberate tactic by Minsk.

German authorities added that they had registered 4,890 entries with a Belarus connection so far this year.

On Tuesday, German Interior Minister Horst Seehofer said EU nations needed "to stick together" and help the Polish government secure its borders. "The Polish are rendering an important service to the European Union," Seehofer added.

Dispute at the border escalates

The European Commission said Tuesday that the EU will likely impose further sanctions against Belarus for encouraging people to cross illegally into Poland. In its daily briefing, the Commission's lead spokesperson on foreign affairs, Peter Stano, said discussion was ongoing between member states regarding further sanctions which are "on the way." 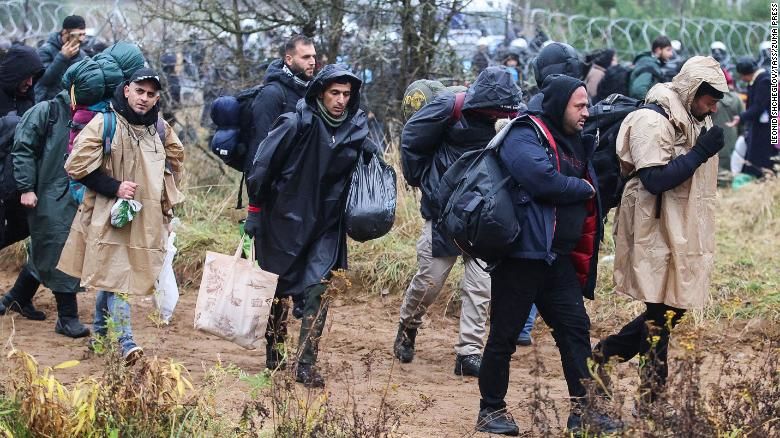 Migrants carry their belongings as they make their way towards the Poland-Belarus border on Monday.

The spokesman stressed that Lukashenko's "irrational and irresponsible behavior" is a sign that he "feels the pressure" mounting from the EU's deployment of sanctions.

"And why do we have a reason to believe that the sanctions are biting? Because the Lukashenko regime starts to behave as a gangster regime because it's hurting them, and they don't know what else to do. So, they try to undermine the European Union by attacking and launching a hybrid attack against the member states of the European Union."

Meanwhile, a NATO alliance official warned it "stands ready" to come to the aid of its allies and called on Belarus to "abide by international law."

The official added: "The Lukashenko regime's use of migrants as a hybrid tactic is unacceptable. The Secretary General remains in close touch with Allied governments on the issue." 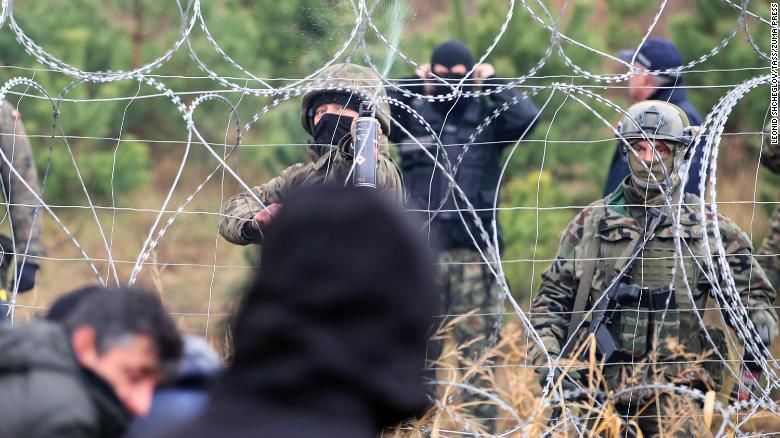 Polish police officers stand guard at an area by the border on Monday.

Amid the international criticism, the Belarusian Foreign Ministry on Tuesday warned Poland against provocations "directed against the Republic of Belarus to justify possible illegal forceful actions against disadvantaged unarmed people, among whom there are many underage children and women."

Russian President Vladimir Putin and Lukashenko "exchanged views on the situation with refugees" at Belarus' borders, according to a Kremlin statement Tuesday.

Meanwhile, the Belarusian State Border Committee said in a statement Tuesday that Poland had lined up military equipment on the border. 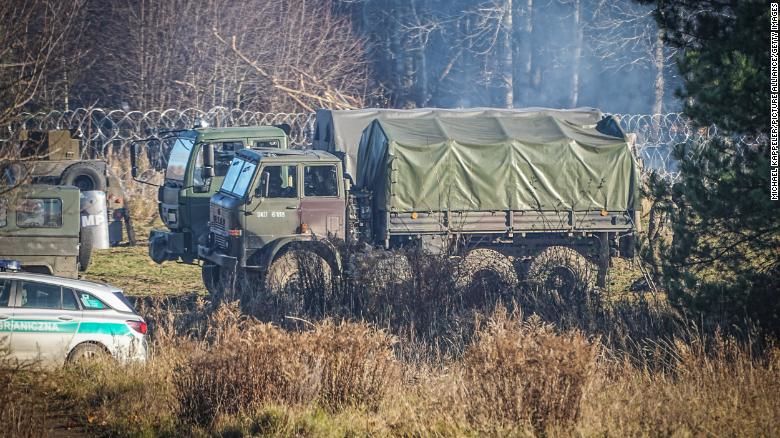 Polish army vehicles are parked along the barbed wire near the Kuznica border crossing on Tuesday.

"At the moment, a chain of Polish security forces has lined up in front of the refugee camp, equipment has been pulled together, including combat vehicles. Representatives of the media, international human rights and humanitarian organizations are not allowed to the border line from Poland to provide assistance to people seeking to apply for refugee status in the EU," the statement said.

The committee claimed some of the refugees felt unwell after the Polish side deployed tear gas followed by loudspeakers and strobe lights against them overnight. It also said there were a 'significant number' of pregnant women and babies among the migrants at the border

UNHCR spokesperson Shabia Mantoo said in a Tuesday briefing in Geneva that it was "very alarmed by the scenes that we are seeing from the Belarus-Poland border." 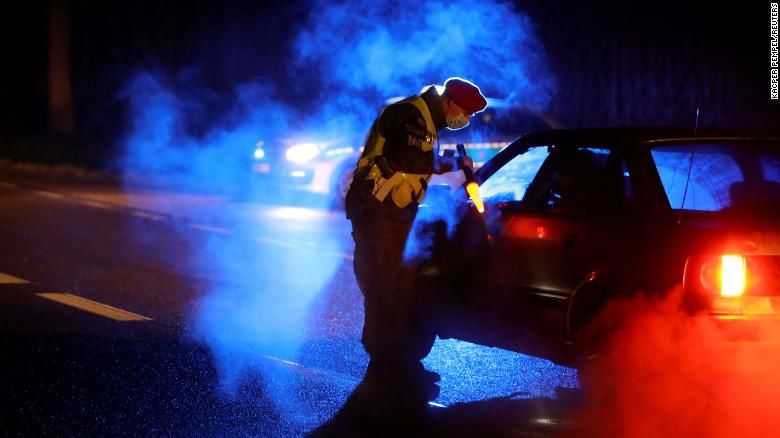 Military police conduct checks on vehicles near the border on Monday night.

"We have repeatedly said that using refugees, asylum seekers and migrants to achieve political ends is unacceptable and must stop," Mantoo added.

Humanitarian groups have previously criticized Poland's nationalist government over its treatment of migrants at the border, where they face grueling conditions as temperatures plummet overnight and a lack of food and medical attention is available. Rights groups have also accused Polish authorities of multiple illegal pushbacks -- a claim border officials have rejected, arguing instead that they are acting in accordance with government regulations.

At least seven migrants have been found dead on Poland's side of the border, with reports of more deaths in Belarus, according to Reuters.