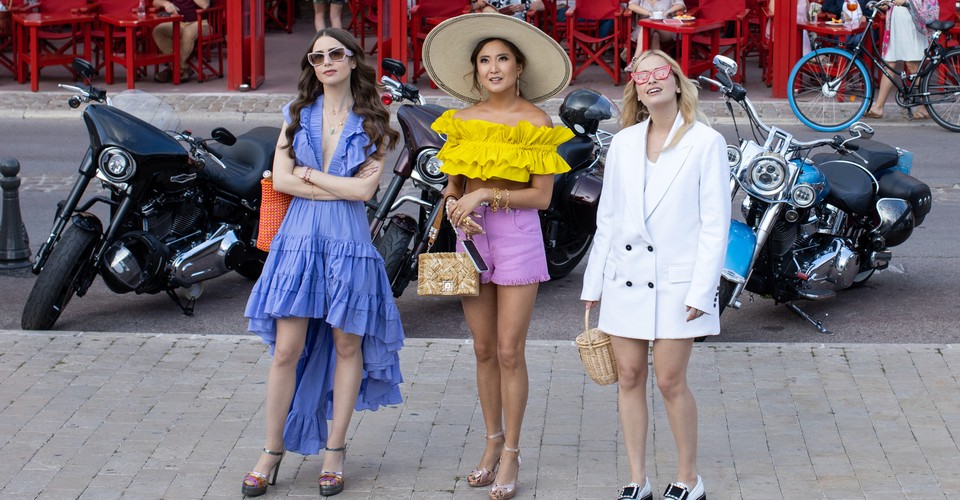 'Emily in Paris' Is the Last Guilty Pleasure

The Netflix show, now in its second season, is an argument for the joys of tackiness.
Right-thinking people agree: Like the burning of Notre Dame, Netflix’s Emily in Paris is a catastrophe for the culture. In mid-2020, when COVID-19 was still novel, the first season of the Sex and the City creator Darren Star’s new sitcom portrayed an American marketing professional (Emily, played by Lily Collins) Instagramming her way through the most sophisticated city on the planet (Paris, shot on location). Withering reviews, offense from French viewers, and the headline “People Hate Emily in Paris So Much It’s a Global Crisis” ensued. Recent reforms at the Golden Globes may owe, in some part, to widespread horror at the awards nominating Emily over more respectable (and diversely cast) fare.

Yet many of the haters were also fans. A tweet by the comedian Phillip Henry summed up the dynamic: “1) Emily In Paris is one of the worst shows I’ve ever seen. 2) I finished it in one sitting.” I’ll admit: Emily made me cringe because she was unembarrassed by ignorance, because her pattern-clashing couture seemed designed to induce migraines, and because her French colleagues embodied clichés as musty as Pepé Le Pew. But I still rewatched the show multiple times, including on Election Night 2020, when Emily’s flirtations with her hunky neighbor helped blot out the wobblings of democracy. As my colleague Shirley Li wrote last year, Emily in Paris is “comforting” because we know “exactly what to expect … absolutely zero tension.”

The blend of love and loathing toward the show was, in a way, strange. In the past decade, many commentators have argued against calling anything a “guilty pleasure,” citing the way that the concept can disguise classism, prejudice, and the American delusion that all free time should be used productively. High-minded reconsiderations of Star’s Sex and the City—an ambitious blend of satire and drama that some critics wrote off as girlish frivolity—helped bring about a world in which comic books, erotica, and committee-written pop music can be called cool. So why all the shame about carefree Emily?

Season 2, newly released on Netflix, helps clarify how exactly Star short-circuited the audience. Emily in Paris is not just a tourist fantasy that flouts wisdom and good taste—it is a show about the tyranny of taste, the joy of tackiness, and the bendiness of culture. In our era, when morality and politics are overtly swirled into the entertainment discourse—when TV shows and fashion lines get dissected not only for their artistic merit but also for their messages—Emily in Paris does two provocative things. It indulges in escapism for its own sake, and it continually picks apart the definitions of quality.

After all, the plot’s big questions—whether Emily will get with the hunky neighbor, Gabriel (Lucas Bravo), or avoid the wrath of her fabulously jaded boss, Sylvie (Philippine Leroy-Beaulieu)—are hardly high-stakes enough to rivet. What really gives every scene its can’t-look-away vibrancy is the clash between Emily’s can-do American cheer and the refinement of her French acquaintances. Her workaholism, provincialism, and affinity for Starbucks strike them as trashy—or, in the one piece of foreign vocab the show drills into its English-speaking viewers, ringarde! In the French sensibility as it’s portrayed on the show, the pursuit of beauty and pleasure—nice food, nice wine—has hardened into the dogma called taste.

The perverse thrill of the first season lay in how the show worshipped the trappings of such taste, holding up Paris as a perfect pastry of a place, while also endorsing Emily’s defiance. Her crass advertising ideas tended to work; her cluelessness attracted rather than repelled would-be friends and lovers. Her trampling of pretenses was fantastical—but it also amplified the truth that pleasure is not zero-sum. One person’s Justin Bieber fandom doesn’t threaten another’s enjoyment of Bach; one person’s deep-dish pizza does not detract from another’s trout amandine. Those who forgo pop music and pizza may feel superior, but Emily in Paris shrugs at such snobbery.

When that shrug is executed with the vim and fluffiness of Star’s cast, the feeling is revelatory—but it also creates dissonance. Emily is not only breaking with artificial ideas of decorum. She is swinging her Americanness, with its consumerism and superficiality and careerism, like a wrecking ball. Our country’s hegemony is so total, and yet here she is chipping away at one of the few great enclaves against it, Paris. A viewer expectation thus set in over the course of Season 1: At some point, she would have to learn a lesson and evolve to fit in better. But that never really happened. Remember, the point of a show like this is its evaporation of tension.

Season 2 does complicate the picture slightly. Generally, its funniest lines are at Emily’s expense: “You look like you just lost a follower,” her roommate, Mindy (Ashley Park), cracks when the influencer flashes a look of concern. Later in the season, at French lessons, a classmate describes Emily as a no-fun workaholic who wears silly clothes, which is hilarious because it’s true. Oh yes: Emily is, finally, learning French, and less because she wants to than because the language barrier is becoming a problem. Meanwhile, the show gives the locals their own story lines, leading to surprisingly crackling scenes entirely en français that add depth to onetime cartoon cutouts.

The story is still preposterous and privilege-ridden—early on, Emily enjoys a free, no-strings-attached girls’ trip to Saint-Tropez—but the underlying culture clash isn’t about clothes and food anymore. Rather, it’s about relationships. Emily strains to be good in sort of a puritanical sense, which is to say she doesn’t want to keep hooking up with her best friend’s ex. As Sylvie taunts her to not be so hopelessly un-French as to decline a hot affair, the show nods at the way that behavior and aesthetics, values and attitudes, get swirled up in that hazy thing called culture. “You’ve got the rest of your life to be as dull as you wish,” Sylvie says. “But while you’re here, fall in love, make mistakes, leave a disastrous trail in your wake.”

French viewers may well have some objections to Sylvie’s advice, but what she’s voicing is less a stereotypical national attitude than the philosophy that makes Emily so compelling and so discomforting. The show dreams of a world in which following your bliss, regardless of others’ evaluations, pays off every time, while bowing to others’ standards makes only misery. Viewers know that material conditions and moral constraints can shape behavior too, and they know that they’ll never feel as free as Emily does. But we tune in to go on vacation.
#COVID-19  #Covid
Add Comment