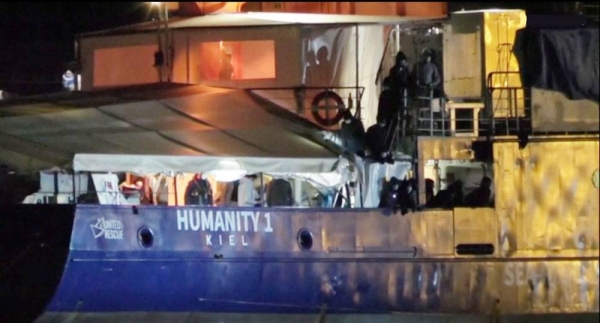 Italian authorities have prevented 35 migrants they did not deem as “vulnerable” from getting off a boat in Sicily on Sunday.
Since coming to power, Italy’s far-right-led government has taken a hard line against privately run maritime rescue ships operating in Italian waters.

Humanitarian groups and two Italian lawmakers who traveled to Sicily protested the selection process as both illegal and inhumane.

The procedure was part of a directive ushered in by Interior Minister Matteo Piantedosi as Italy again targets the non-governmental organizations it has long accused of encouraging people trafficking in the central Mediterranean Sea.

“Free all the people, free them,’’ Italian lawmaker Aboubakar Soumahoro said in an emotional appeal directed at Premier Giorgia Meloni from the Humanity 1 rescue ship in Catania, calling the new policy “inhumane”.

The passengers have faced “trauma, they have faced everything that we can define as prolonged suffering, a hell,” he added.

Italian authorities completed identifying vulnerable migrants on the German-operated Humanity 1 overnight and asked another boat with 572 migrants, the Geo Barents, to proceed on Sunday to Catania’s port for the same vetting.

Two other boats run by non-governmental organizations remained at sea with no immediate change in their status.

The NGOs noted that people are sleeping on floors and decks, fever-inducing infections are spreading, and food and medical supplies are running out. Some migrants have been on the ships for more than two weeks.

The group considers all passengers vulnerable by definition after being rescued at sea and deserving of a safe port under international law.

Authorities allowed three women and a baby off the ship first, then one family followed by unaccompanied minors, who numbered over one hundred.

The confrontational stance taken by Meloni’s government is reminiscent of the standoffs orchestrated by Matteo Salvini, now Meloni’s infrastructure minister in charge of ports, during his brief 2018-2019 stint as interior minister.

Italy’s new government is insisting the countries whose flags the charity-run ships fly must take in the migrants. In a Facebook video, Salvini repeated his allegations that the presence of the humanitarian boats encourages smugglers.

Nongovernmental organizations reject the government’s interpretation, saying they are obligated by the law of the sea to rescue people in distress and that coastal nations are obligated to provide a safe port as soon as feasible.

While the humanitarian-run boats are being denied a safe port, thousands of migrants have reached Italian shores over the last week, either on their own in fishing boats or after being rescued at sea by Italian authorities. They account for 85% of all arrivals, according to the government.
#Facebook
Add Comment