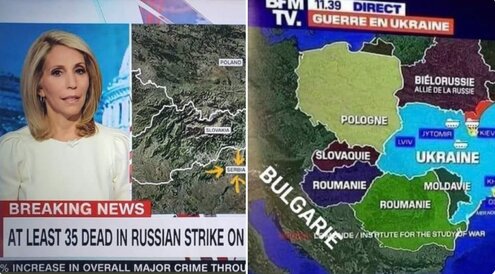 Confusing! Hungary mixed up with Serbia by American CNN

The American CNN was reporting on the Russian-Ukrainian war, when the news-based channel published a map showing Hungary as Serbia.

It is internationally known that Hungary plays an important role as a neighbour of Ukraine in providing humanitarian assistance to refugees. Despite all this, it seems that the positioning of Hungary causes some difficulties overseas. And this is not the first time.

As the Hungarian news portal Origo reports, the world-renowned pro-democracy

"CNN has published a “map” on which Hungary is presented as Serbia."

In addition, it does not show “Serbia” near the Serbian-Hungarian border, but in the north-eastern part of the country, near the Slovakian and Ukrainian borders.

The latest CNN blunder was spotted by Peter Murphy, a correspondent for the French news agency AFP in Budapest who also shared a photo on his Twitter page.

As reported by Origo, last month an American Democratic House Speaker spoke about Russia’s encirclement of Hungary. Presumably by mistake, the veteran politician gave the false impression that Russia was attacking Hungary, instead of Ukraine.

Sadly, this is not the first time that Hungary is mixed up with a neighbouring country. As we previously reported, last September, almost the whole world had its eyes on Budapest due to Pope Francis’ visit. Therefore, it was quite startling that the world-famous American journal The New York Times mixed up the Hungarian capital with Bucharest and reported on its official Facebook page that the head of the Christian church visited Romania. The mistake had been corrected more than 14 hours after the article was published.

Another similar confusion has been noticed by Peter Murphy which can be seen on the second photo of his Twitter post.

"Namely, the French public broadcaster BFM has mixed up Hungary with Romania."

The photo clearly shows that the channel presented Romania as two separate countries (in green and purple), forgetting about Hungary – which along with France – is also a member of the European Union.

In addition, there is even more confusion regarding the positioning of Austria, Slovenia, Croatia, Bosnia-Hercegovina and Serbia, all of which were presented as Bulgaria.

It seems, reporters at the French TV channel and overseas still have room for improvement when it comes to Europe’s geography.