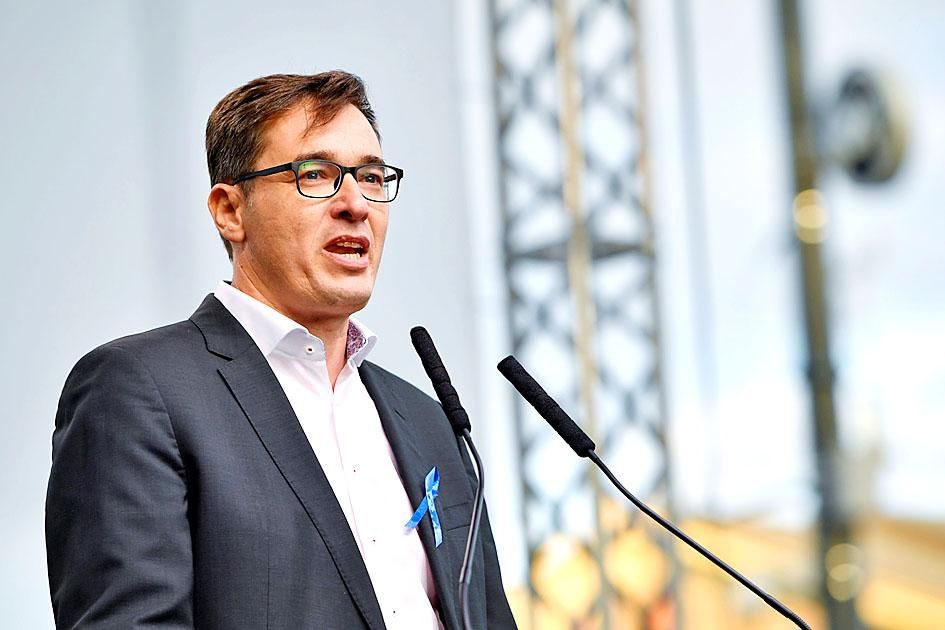 Gergely Karacsony said that there is room for an increase in exchanges between Taiwan and Hungary, as many Hungarians are critical of China
Budapest Mayor Gergely Karacsony is making waves as a thorn in Beijing’s side when it comes to human rights, despite his nation’s emergence as one of China’s staunchest EU allies under Hungarian Prime Minister Viktor Orban.

In June, thousands of people flooded the streets of Hungary’s capital to protest a plan to establish a satellite campus of Shanghai’s Fudan University, which the BBC reported would cost more than the Orban government’s entire 2019 budget for higher education.

Karacsony, a member of the opposition Dialogue for Hungary, moved to scupper the plans by renaming streets near the planned site with names politically unpalatable to Beijing.

It is no surprise that the man responsible for “Dalai Lama Street,” “Free Hong Kong Road” and “Uyghur Martyrs’ Road” is also a supporter of closer ties with Taiwan.

In a recent e-mail interview, Karacsony talked up the potential for increased exchanges between Taiwan and Hungary, saying that many Hungarians are critical of China.

“I am sure that a lot of that has to do with China’s oppressive actions in Xinjiang, Hong Kong, and its aggressive moves in the South China Sea and beyond,” he said.

Karacsony, who was elected mayor in 2019 on a five-party slate, but who recently withdrew from a primary race for prime minister, said that new studies suggested that half of Hungarians were critical of China, with another 25 percent “undecided” or “hesitant.”

Even though Hungary has “rightly” cultivated a closer working relationship with China since the fall of the Berlin Wall, Karacsony is critical of the manner in which the Orban government has “massively scaled up its engagement” with Beijing.

“In this new China policy, there is no criticism whatsoever of China’s current human rights record, its unilateral actions and violations of international norms,” he said.

The cultivation of deeper ties with China under Orban’s “Eastern Opening” policy was “not really popular — not even among pro-government voters,” Karacsony said.

Karacsony said that “education, technology and digitalization, and environmental protection are certainly areas where we would welcome more cooperation” with Taiwan.

Should Orban’s Fidesz party lose in an election next year, Karacsony said that any new government should support Taiwan’s participation in international organizations and agencies such as the WHO and the International Civil Aviation Organization.