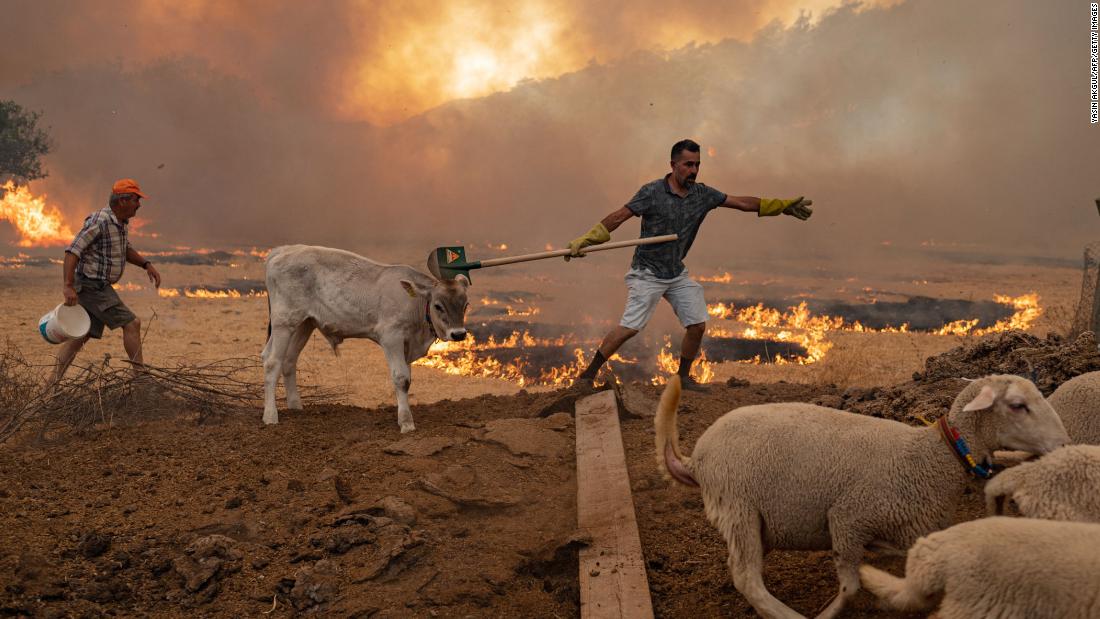 Extreme heat and wildfires continued to plague parts of southern Europe on Wednesday, a day after the top temperature in Greece reached 47.1 degrees Celsius (117 degrees Fahrenheit) -- just shy of the highest ever recorded in Europe.

Greece is facing one of its worst heatwaves in decades and the country remains on high alert as it continues to battle blazes across the country.

Heat warnings have also been issued for Bosnia and Herzegovina, Bulgaria, Italy, Romania, Serbia and Turkey. Deadly wildfires have swept across parts of Turkey in recent days and forced the evacuation of tourist resorts.

Residents of the Greek capital, Athens, have been warned to stay indoors with their windows closed because of poor air quality after a wildfire raged Tuesday in the suburbs north of the capital. The extreme heat forced the Ministry of Culture to close the Acropolis and other ancient sites from noon to 5 p.m. local this week. 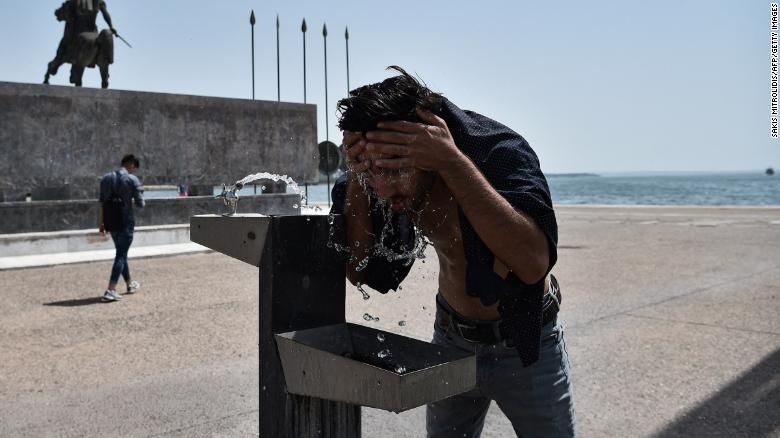 A man cools off with water during a heatwave in Thessaloniki, Greece, on July 29.

The Greek Fire Service said Wednesday it had been called to intervene in 78 forest fires in the past 24 hours. A fire on the large island of Evia, northeast of Athens, was burning strongly on Wednesday.

Wildfires also continued to burn Tuesday in parts of Turkey, fueled by the extreme heat. At least eight people had died as a result of the fires in Mugla and Antalya provinces as of Tuesday, Turkey's state-run Anadolu news agency reported.

The region's heatwave comes on the heels of devastating wildfires last week in Spain, Greece and the Italian island of Sardinia and less than a month after catastrophic flooding in northern Europe claimed more than 200 lives.

Experts say freak weather events like the floods in Germany, Belgium and the Netherlands, as well as the recent heatwave and wildfires across Canada and the US, are a sign of the impacts of climate change.

Droughts are becoming more frequent and more severe in southern Europe, and environmental authorities have warned that the region is at the greatest risk from the impacts of climate change on the continent.

CNN forecasters said the region's current heatwave would last until at least Friday, with the peak of heat coming Tuesday and Wednesday for Greece. Temperatures were expected to again be up to 10 degrees above average Wednesday, at over 40 degrees Celsius, in Greece and western Turkey. 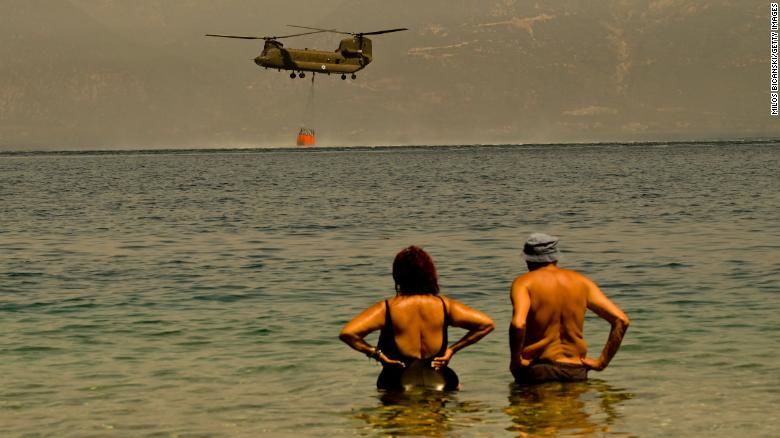 Local residents watch as a Greek army Chinook helicopter collects water as firefighters continue to tackle a wildfire near the Greek village of Lambiri on Sunday.

The Copernicus Atmosphere Monitoring Service (CAMS), an EU program, said Wednesday that the Mediterranean region was evolving into a "wildfire hotspot" and warned that the fires already burning were emitting large amounts of smoke pollution into the atmosphere.

"In Turkey and southern Italy, CAMS data shows the emissions and intensity of wildfires are rapidly increasing, and countries like Morocco, Albania, Greece, North Macedonia and Lebanon are also affected," it said in a news release.

"Smoke plumes from the fires are clearly visible in satellite imagery crossing the Eastern Mediterranean Basin from southern Turkey." 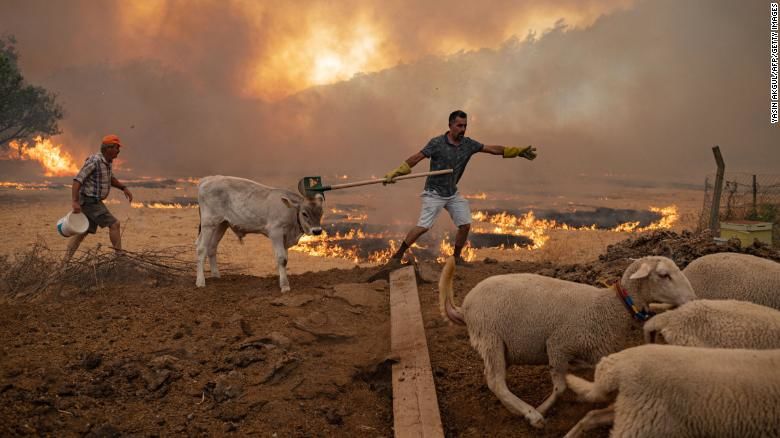 A man guides his livestock away from an advancing fire on August 2 in Mugla, Marmaris district, as the European Union sent help to Turkey and volunteers joined firefighters in battling days of violent blazes.

In Greece, more than 200 locations topped 40 Celsius (104 Fahrenheit) on Tuesday. The top temperature of 47.1C (117 F), registered in Langadas in Thessaloniki, was less than one degree from the all-time European record of 48.0C recorded in Athens, Greece, in 1977.

Greece's weather service warned that the risk of fire remained very high Wednesday and Thursday. "The prolonged heat conditions prevailing in our country have increased the flammability of dead fuel to extremely high levels in almost the entire territory, making any use of fire extremely dangerous," it said.

The fire on the outskirts of Athens is mostly under control but fears remain that it could surge up again, according to the authorities.

Greek Prime Minister Kyriakos Mitsotakis said Wednesday that there had been no loss of life and that the emergency evacuation system had worked. He stressed that the next days would be crucial because of the heatwave and that everyone should remain on alert.

Several residential areas have been evacuated, according to the Greek Fire Service.

As the fire spread Tuesday north of the capital, authorities urged residents to leave the Athens suburbs of Varimpompi, Adames, and Thrakomakedones, as well as the Olympic village. The fire also threatened the Tatoi Royal Palace.

Firefighters also battled strong blazes on the Greek islands of Kos and Evia, as well as the Peloponnese peninsula, as some residents were evacuating.

"The hours are critical and the conditions we face extremely dangerous," Greece's Deputy Minister for Civil Protection, Nikos Hardalias, said Tuesday. "Our country is experiencing an extreme weather phenomenon the last days, one of the worst heatwaves of the last 40 years."

Updating journalists on the Athens-area fire Wednesday, Hardalias said an initial estimate was that 76 houses and 27 businesses had been seriously damaged. More than 70 people have been taken to the hospital with respiratory problems since Tuesday, Greek Health Minister Vassilis Kikilias added. 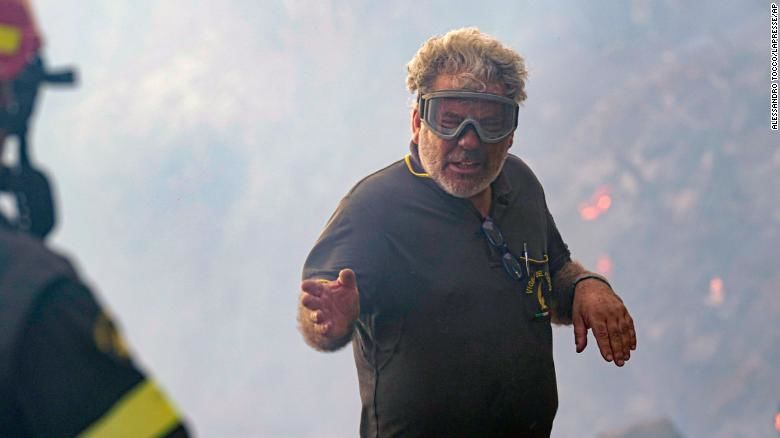 A firefighter talks to his colleague as they work to put out fires in Cugliari, near Oristano, on the Mediterranean island of Sardinia, Italy, on July 26.

The European Commission said it was working around the clock to mobilize support for firefighting operations in the worst-hit countries. Two firefighting airplanes are being sent Wednesday from France to affected areas in Italy, it said in a news release, and two firefighting planes from Cyprus are supporting Greece.

The Netherlands and Czech Republic are sending helicopters to Albania, and Slovenia is deploying 45 firefighters to North Macedonia, it added.

European Commission President Ursula von der Leyen tweeted that she was following the situation with great concern. "European solidarity is at work to fight these terrible fires. We are with you," she said.

A number of wildfires are burning in the east and northeast of North Macedonia, according to the European Commission's Emergency Response Coordination Centre (ERCC), forcing evacuations from Kochani City.

Albania has suffered more than 120 fires in recent weeks following sustained high temperatures, with the Vlora region facing the most critical situation, the ERCC said.

The Italian farmers' association, Coldiretti, said Wednesday that its analysis of fire data indicated that large fires had tripled in the summer of 2021 compared to the historical average from 2008 to 2020, causing damage worth millions of euros to the environment, the economy, work and tourism.

The blazes have incinerated tens of thousands of hectares of woods and Mediterranean scrub across the country, it said, leaving dead animals and charred trees, olive groves and pastures behind them, as well as threatening urban areas. 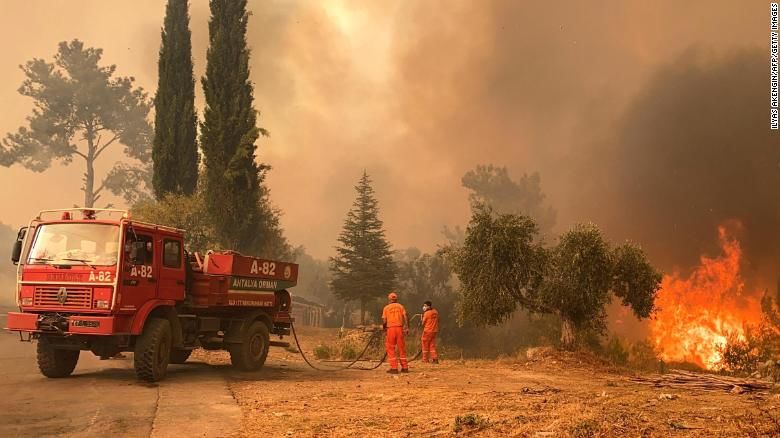 A firefighter battles with fire during a massive wildfire which engulfed a Mediterranean resort region on Turkey's southern coast near the town of Manavgat, on July 29.

Meanwhile, Turkey was fighting against 11 fires in six provinces as of Tuesday, Agriculture and Forestry Minister Bekir Pakdemirli tweeted on his official account.

A total of 152 fires in 32 provinces have been brought under control in Turkey in the last six days, he said.

Speaking at a government news conference in Marmaris, Pakdemirli said the Marmaris district of Mugla province had seen an all-time high temperature of 43.5 degrees Celsius with very low humidity -- less than 10% -- and 65 kilometers per hour (40 mph) wind speed.

More than 2,000 houses have been damaged in Antalya and another 347 in Mugla, Interior Minister Suleyman Soylu told the news conference.

The mayor of Milas, a city in southwestern Turkey, said flames from the ongoing fires had reached close to a power plant Tuesday evening.

"The situation is very serious," said Mayor Muhammet Tokat. "The flames came near a thermal power plant. If possible, a plane or helicopter with night vision should be directed to the area immediately."