A diplomatic spat between Lithuania and China over Taiwan could have ripple effects across the region for how EU countries -- from the Baltic states to Hungary and Romania -- deal with Beijing.

A diplomatic spat between Lithuania and China over Taiwan has pushed Europe's relations with Beijing back into the spotlight as the European Union struggles with how to define its increasingly shaky relationship with the world's second-largest economy.

The latest episode between Vilnius and Beijing kicked off on August 10, when China recalled its ambassador to the Baltic country in response to Lithuania's decision to set up a diplomatic office in Taiwan. This was followed by China demanding that Vilnius recall its ambassador from Beijing.

China views the island of Taiwan as part of its territory and asserts the right to unify both sides, with Beijing pushing countries to renounce ties with Taipei as a condition of establishing relations under what it calls the "one-China principle." Consequently, only 15 countries recognize Taiwan as a sovereign state. 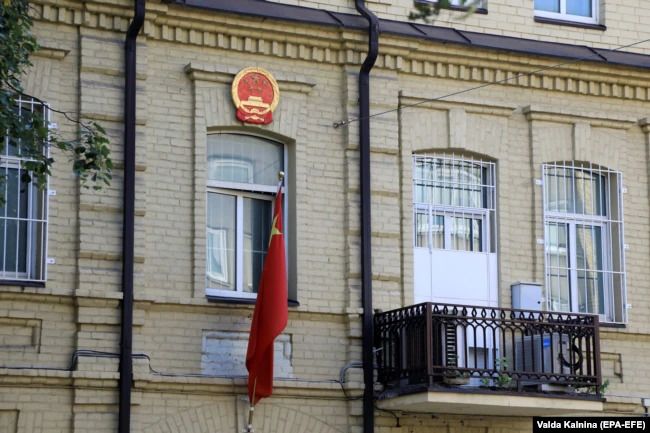 The Chinese Embassy building in Vilnius

Beijing's tough response to Lithuania is seen as a warning shot to other countries in Europe looking to follow suit and comes amid changing sentiment across the 27-member EU toward China.

Brussels has found it increasingly difficult to balance growing concerns about human rights in China and the bloc's desire to gain deeper access to China's lucrative markets. But many of the EU's smaller countries -- such as the Baltic states -- and Romania have led the charge toward a deeper shift in how to engage with China.

"Lithuania has been at the forefront of this trend," Frank Juris, an expert at the Estonian Foreign Policy Institute under the International Center for Defense and Security, told RFE/RL. "The traditional Chinese approach of singling out small states and pressuring them is proving to be counterproductive."

The recent escalation with Beijing comes after a previous diplomatic row between China and the Baltic country of 2.7 million in which Vilnius quit the "17+1" platform -- a Beijing-led format for engaging with Central and Eastern European countries -- and could have ripple effects across the wider region.

Vilnius has also been an increasingly vocal critic of China's actions in Hong Kong and its western province of Xinjiang -- the country's parliament described Beijing's treatment of its Uyghur minority there as "genocide" in May -- and has donated vaccines to Taiwan throughout the pandemic.

"What has been happening is part of an evolution in foreign policy that is several years in the making," Konstantinas Andrijauskas, a China expert at Vilnius University, told RFE/RL. "The economic promises of engagement with China have not come and [Beijing's] behavior is seen as threatening the rules-based international order that Lithuania has benefited from."

In an August 15 interview with the Financial Times, Lithuanian President Gitanas Nauseda said his country would not back down from its dispute with Beijing. "We would like to also have relations with China based on the principle of mutual respect," Nauseda said. "Otherwise the dialogue turns into unilateral ultimatums, requirements which are not acceptable in international relations."

"We do not regard the opening of a representative office in or from Taiwan [as opposed to an embassy or consulate] as a breach of the EU's one China policy," Massrali said in a statement.

In May, the European Parliament voted overwhelmingly to freeze the process for ratifying the EU's investment pact with China unless it lifts sanctions against the bloc's lawmakers that were imposed after Brussels placed sanctions on Chinese officials over the mass internment of Uyghurs, Kazakhs, and other Muslim minorities in Xinjiang.

Since then, debate in Brussels has continued over where the EU should place itself amid an intensifying global rivalry between Beijing and Washington and a more aggressive posture from China.

Amid the current diplomatic spat between Beijing and Vilnius, Lithuania has found itself as a target of China's state-run media, which has characterized the Baltic country as a U.S. proxy intent on derailing relations between China and the EU.

An August 13 editorial from the Global Times, an outlet controlled by China's Communist Party, criticized Lithuania's policies towards Beijing and went on to call for a joint effort with Belarus and Russia to "punish" Vilnius as a warning to other countries. "China and Russia should take proper opportunities to strike against a country that has lost its mind. This should be the new content and guidance for China-Russia strategic cooperation," the editorial said.

"Moscow is seen as the main threat for Lithuania, and Russia and China's closer relationship is a cause for worry among policymakers [in Vilnius]," Andrijauskas said. "Whether or not China and Russia would actually work together against Lithuania, this rhetoric is confirming some of the worst fears about Beijing."

Despite the harsh words from Beijing, Lithuania has limited economic exposure to the world's second-largest economy -- China is the country's 12th-largest trading partner -- which has allowed it more room to maneuver in its dispute with China. Similar situations exist for other smaller countries in the EU that have signaled their displeasure with Beijing.

During the 17+1 summit in February, Bulgaria, Estonia, Latvia, Lithuania, Romania, and Slovenia chose to send ministers instead of their head of state or government, despite Chinese President Xi Jinping chairing the meeting for the first time. The move was seen as a rebuke of the grouping and a sign of growing skepticism toward China in Central and Eastern Europe. 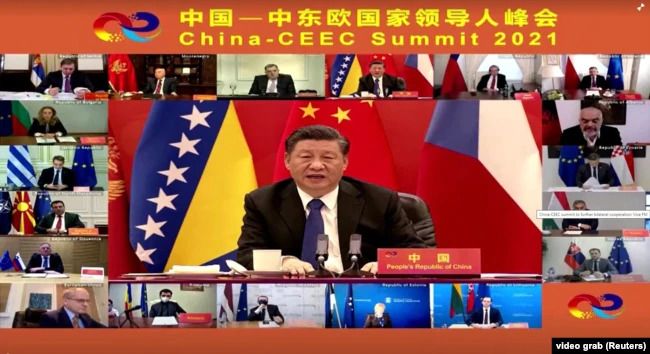 Chinese President Xi Jinping (center) speaks during the virtual summit of China and Central and Eastern European countries in Beijing on February 9.

Romania is another country that has taken a tougher line against China recently, with Bucharest pushing out Chinese companies from core sectors like nuclear power and telecommunications. The moves are partly possible because Romania does not have to defend the interests of large national companies with stakes in China and the government's desire to boost domestic companies.

Andreea Brinza, vice president of the Romanian Institute for the Study of the Asia-Pacific, told RFE/RL that while Bucharest enacted policies in regards to Beijing, "Romania hasn't expressed any interest in following in Lithuania's footsteps," pointing to how in contrast to Vilnius, Bucharest has been quiet on human rights issues in China.

According to Brinza, Bucharest -- like many countries in the EU -- is still taking most of its cues on China policy from Brussels and "the big EU countries' positions," mainly France and Germany.

Germany, Europe's largest economy, will hold federal elections in September and Annalena Baerbock of the Greens, a candidate for chancellor -- has pushed for a more China-skeptic foreign policy. Armin Laschet, the leader of the Christian Democratic Union and another chancellor candidate, has also begun to adopt a more pragmatic stance toward China after initially calling for a continuation of Chancellor Angela Merkel's middle path with Beijing.

Tamas Matura, an assistant professor at Corvinus University in Budapest, told RFE/RL that Hungary will be watching the German elections closely. Hungarian Prime Minister Viktor Orban maintains close relations with Beijing -- including controversial plans to establish a branch of a Chinese university -- and China looms increasingly large in the country's politics.

Matura said disputes such as the one with Lithuania and a general worsening of relations between the EU and China may make Budapest "even more important in the eyes of Beijing" as a regional player in the bloc eager to engage with China, but that the outcome of the German vote and other shifts across Europe could cause Hungary to pull back.

"If the pressure gets too high in the long run, especially after the German elections, Budapest may have to reconsider its position as well," Matura said.