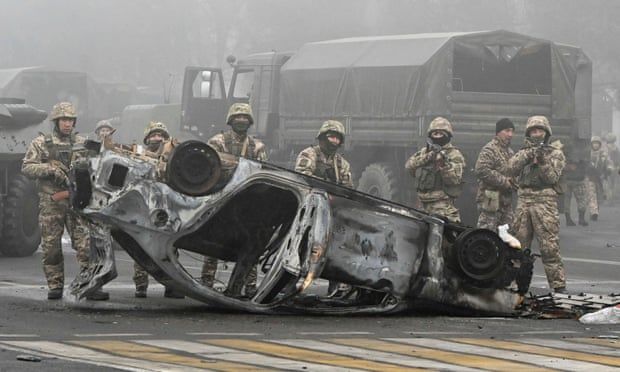 As order is restored in Kazakhstan, its future is murkier than ever

The tragic events of last week, in which dozens lost their lives, have exposed hidden political tensions

For many Kazakhs, the full story behind the unrest of the past week remains as murky as the mist that enveloped Almaty, the country’s largest city and the centre of violence, at the same time.

People were unable to access accurate information, as an internet blackout froze almost all access to the outside world during a tragic few days of violence in which military vehicles rolled through the streets, government buildings burned and state television carried rolling threats that “bandits and terrorists” would be eliminated without mercy.

Now both order and the internet have been largely restored, but there are still more questions than answers. One thing that is clear is many of the old assumptions about Kazakhstan, the resource-rich Central Asian state, have been overturned.

Just last month the country celebrated the 30th anniversary of its independence, with official speeches highlighting the image of a peaceful, prosperous nation, one that had largely avoided political unrest and boasted an independent and “multivector” foreign policy.

Kazakhstan, it seemed, had even successfully managed the tricky transition out of power from its long-standing president, Nursultan Nazarbayev, who led the country from independence in 1991 until 2019, to his handpicked successor, Kassym-Jomart Tokayev.

A month later, and the picture is very different. Peaceful protests turned into violent clashes, Tokayev announced he had ordered security forces to “shoot to kill, without warning”, and troops from a Russia-led military alliance are on the ground after being called for by Tokayev.

Amid it all, dozens of deaths and a sense from eyewitness reports that the real number of casualties could be much higher than the 26 “armed criminals” and 18 security officers that the interior ministry has said were killed. More than 4,000 people have been detained.

There was a suspicion all week that there may be more in play than a straightforward popular uprising, and this was reinforced by the announcement on Saturday that Karim Masimov, a powerful former security chief and prime minister, had been arrested on suspicion of treason.

The move only increased speculation that the initial protests could have been used by groups within the country’s political elite to fight their own battles. A source in Kazakh business circles gave credence to this scenario, describing a situation over recent months of increasing tension between figures close to Nazarbayev and his successor, Tokayev.

“In the last six to 12 months there was increased squabbling, which was paralysing decision-making,” said the source. “It has been bubbling for some time.”

One of the more surprising episodes of the week was Tokayev’s transformation from placid placeholder to furious autocrat, promising to crush the revolt brutally.

“We were dealing with armed and well-prepared bandits, both local and foreign. Bandits and terrorists, who should be destroyed. This will happen in the nearest time,” Tokayev said in an uncompromising address to the nation on Friday, noting that there were 20,000 such “bandits” in Almaty alone. He also posted a message in English on Twitter: “In my basic view, no talks with the terrorists: We must kill them.” It was later deleted. 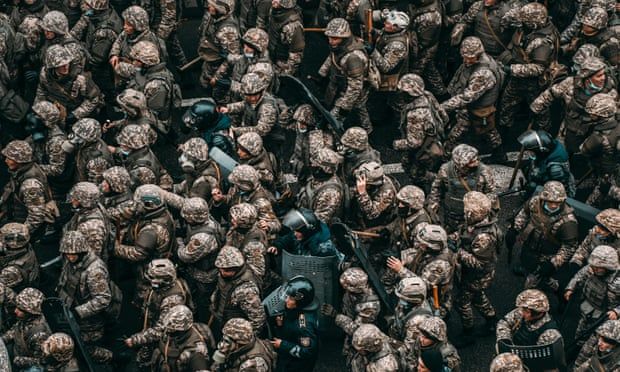 Riot police during the uprising in Almaty.

“Before, he came across as a mealy-mouthed quiet diplomat, but the rhetoric we saw on Friday was that of a general leading an army,” said Kate Mallinson, associate fellow at Chatham House.

Amnesty International described Tokayev’s promise to shoot without warning as “a recipe for disaster”, and there is now a question of how much the government response will differentiate between peaceful protesters and violent groups. Tokayev put Kazakhstan’s already beleaguered civil society on alert when he said that free media played a role in fanning the unrest.

“There is still very little independent information and a lot of uncertainty. However, one thing is clear: the peaceful protest was genuine and spontaneous,” said Diana T Kudaibergenova, a sociologist at Cambridge University. “People went to the streets to voice their grievances and we saw some self-organisation, especially in western Kazakhstan.” 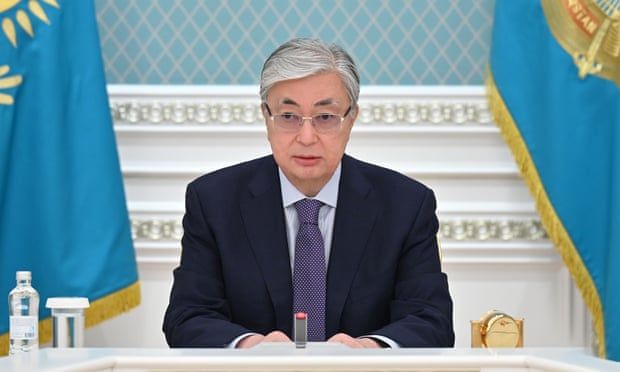 The protest began in the west last weekend, sparked by rising fuel prices, and quickly spread to other cities, including Almaty. There, many of those on the streets reported that on Wednesday and Thursday the demonstration was hijacked by violent groups, some of whom appeared to be well organised, and who attacked government buildings and briefly seized the airport.

Tokayev, in his address, spoke vaguely about “foreign-trained” attackers, but gave no details and did not specify who they were supposedly working for.

Many questions remain about the role of Nazarbayev in the week’s apparent backstage quarrels. Tokayev announced on Wednesday that he was removing Nazarbayev from head of the security council, without stating whether that was with or without the former president’s approval. There were persistent rumours throughout the week that Nazarbayev and his family had fled the country.

On Saturday,, Nazarbayev’s spokesperson Aidos Ukibay denounced the rumours as “knowingly false and speculative information”. He said Nazarbayev was in close contact with Tokayev and wanted the nation to rally around the new president. But the man himself has been silent during the most dramatic week in the young country’s history.

It was a surprising absence from a politician who has personified Kazakhstan for the past three decades. When he stepped down in 2019, the new capital city he had ordered created in 1997 was renamed Nur-Sultan, in his honour. But for all the excesses of the cult of personality, for a long time Nazarbayev’s Kazakhstan was a much savvier autocracy than those of the other post-Soviet Central Asian nations.

Many western diplomats had a positive view of his leadership, despite the democratic shortcomings, in part because of the lucrative opportunities for western businesses the country provided. “He was able to balance Russia and China, and other external influences, and he implemented some genuine reforms,” said a western diplomatic source.

At the same time, a small elite close to Nazarbayev became tremendously wealthy, while many ordinary people still lived in poverty. Over time, resentments only intensified. “In Kazakhstan, market economy means capitalism, which means big money, which means large bribes for the best connected,” as a former US ambassador put it in a leaked diplomatic cable from 2010, paraphrasing a conversation with a top Kazakh businessman.

Whatever the final outcome of last week’s turmoil, the images of a statue to Nazarbayev in the city of Taldykorgan being pulled down, and of crowds chanting “Old man, out!” are likely to fundamentally alter the legacy he hoped for.

Also at stake is the independent foreign policy that was one of his most prized achievements. When, on Wednesday evening, Tokayev called for support from the Collective Security Treaty Organisation (CSTO), a Russia-led military alliance, the request was approved within hours. At a time when all eyes were on the troops massed close to Russia’s border with Ukraine, suddenly there was a different Russian intervention to contend with.

Both the Kazakh and Russian sides have insisted the contingent will be limited in size, scope and duration, and so far, claims of a Russian occupation seem overblown. But even if the troops are gone in a few days, the balance of power in the region is likely to have been altered irrevocably. “Nothing comes for free with Putin, and there will be a quid pro quo,” said Mallinson.As well as geopolitical implications, the sudden collapse of the Kazakh security forces and Nazarbayev’s legacy may also have important repercussions in Russian domestic politics.

“Russia and Kazakhstan are two very similar political models: post-imperial resource-based personalised autocracies,” said Moscow-based political scientist Ekaterina Schulmann. The “Nazarbayev option” had been considered as one possible way for Vladimir Putin to step aside safely when his present term ends in 2024, but it now seems a much less appealing option than it might have done a week ago.

Those involved in political decision-making in Russia would likely conclude from the recent events in Kazakhstan that even managed transition is dangerous, and that security forces should be further strengthened, said Schulmann.

“If you have a pet idea, whatever happens will feed into your pet idea,” she said, noting that the Kremlin is fixated on preserving the current power structures and repelling perceived outside threats through repressing dissent at home.

As attention shifts to the behind-the-scenes infighting and the geopolitical implications, some inside the country are urging that the human tragedy of the past days should not be forgotten. On Saturday, a group of Kazakh civil society organisations penned an open letter to the authorities: “Unrest and violence have no place at peaceful demonstrations… We ask the authorities to carry out a full investigation of every part of this tragedy.”